Only China has contributed more companies to the list this year

Forbes Asia’s latest Fabulous 50 list—an annual honour roll of Asia Pacific’s best, big public companies—features 10 Indian companies this year. For the fifth year in a row, India has contributed the second-highest number of companies, behind China, with 25 companies.
Among the Indian companies in the list, information technology major Tata Consultancy Services (TCS) tops in terms of market capitalisation ($76.3 billion). The company has revenues of $15.5 billion. It is followed by HDFC Bank, with an m-cap of $43 billion and revenues of $9.8 billion.
Interestingly, HDFC Bank debuted on the Fab 50 list in 2006 and has featured in the list nine times. Built from scratch by its managing director Aditya Puri, the lender has about 32 million customers and a network of over 4,000 branches in nearly 2,500 towns and cities.
The other Indian companies on the list include HCL Technologies, Aurobindo Pharma, Lupin, Motherson Sumi Systems, Sun Pharma Industries, Tata Motors, Tech Mahindra and Titan.On the global front, a number of new companies have debuted on the list. Among them is Hotel Shilla from South Korea, whose revenue jumped more than 30% last year, thanks to the boom in Chinese tourism. Another new entrant is NetEase from China which operates in three segments: Online games, advertising, e-mail and e-commerce.
Despite fears of a slowdown in mainland China and the country’s tanking stock market, China makes its mark on the list with the most valuable company—Tencent, now worth $176.5 billion—and the biggest company, Lenovo, which generated $46.3 billion in revenue last year.
The list, which was first launched in 2005, has seen key changes in the sectors and countries contributing to the list in the past decade. In the first list, Japan produced the most companies (12) and Australia was second, with 10, and Hong Kong had five. In the latest list, Japan has just one and Australia and Hong Kong have none. While there was just one pharmaceutical company in the initial list, this year there are nine.
This year’s list has 23 first timers and three companies that have made a comeback to the list after two or three years. More than half the companies in last year’s list did not feature in 2015.
For the complete list, visit: www.forbes.com/fab50 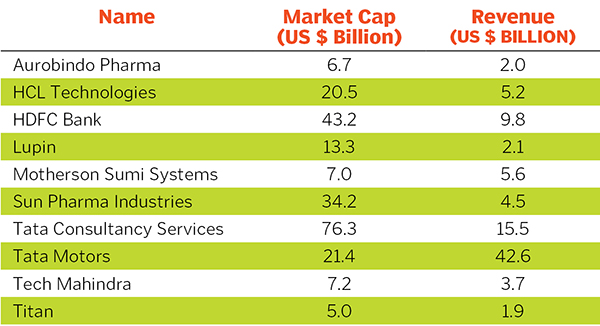