The mystery of the Himalaya's Skeleton Lake just got weirder

Hundreds of human skeletons emerge from this lake, originally thought to have died simultaneously in a catastrophe. But a new genetic analysis carried out by scientists in India, the United States and Germany has upended that theory 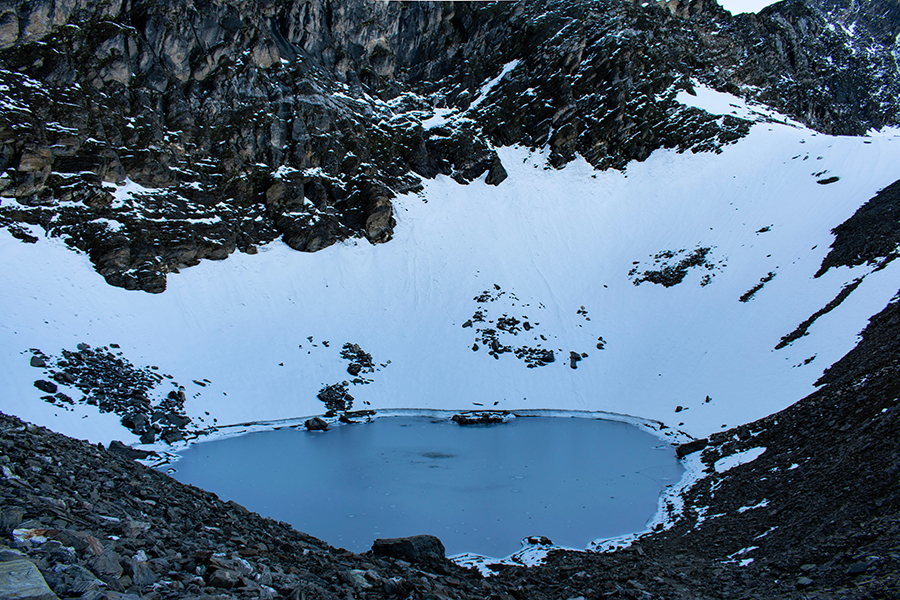 Image: Shutterstock
Nestled in the Indian Himalayas, some 16,500 feet above sea level, sits Roopkund Lake. One hundred and thirty feet wide, it is frozen for much of the year, a frosty pond in a lonely, snowbound valley. But on warmer days, it delivers a macabre performance, as hundreds of human skeletons, some with flesh still attached, emerge from what has become known as Skeleton Lake.
Who were these individuals, and what befell them? One leading idea was that they died simultaneously in a catastrophic event more than 1,000 years ago. An unpublished anthropological survey from several years ago studied five skeletons and estimated they were 1,200 years old.
But a new genetic analysis carried out by scientists in India, the United States and Germany has upended that theory. The study, which examined DNA from 38 remains, indicates that there wasn’t just one mass dumping of the dead, but several, spread over a millennium. The report, published Tuesday in Nature Communications, has led to a “far richer view into the possible histories of this site” than previous efforts provided, said Jennifer Raff, a geneticist and anthropologist at the University of Kansas who was not involved with the work. Anthropologists have known about Roopkund Lake for several decades, but little was known about the provenance of its skeletons. Rockslides, migrating ice and even human visitors have disturbed and moved the remains, making it difficult to decipher when and how the individuals were buried, much less who they were. “In a case like this, that becomes impossible,” said Cat Jarman, a bioarchaeologist at the University of Bristol in England who was not part of the research team. Genetic analysis has helped make some sense of the jumble of bones. The researchers, led in part by Niraj Rai, an expert in ancient DNA at the Birbal Sahni Institute of Palaeosciences in India, and David Reich, a geneticist at Harvard University, extracted DNA from the remains of dozens of skeletal samples, and managed to identify 23 males and 15 females. Based on populations living today, these individuals fit into three distinct genetic groups. Twenty-three, including males and females, had ancestries typical of contemporary South Asians; their remains were deposited at the lake between the seventh and 10th centuries, and not all at once. Some skeletons were more ancient than others, suggesting that many were interred at the lake lifetimes apart. Then, perhaps 1,000 years or so later, sometime between the 17th and 20th centuries, two more genetic groups suddenly appeared within the lake: one individual of East Asian-related ancestry and, curiously, 14 people of eastern Mediterranean ancestry. How all these individuals met their end is anyone’s guess. There’s no evidence of bacterial infections, so an epidemic was probably not to blame. Perhaps the challenging high-altitude environment proved fatal. The earlier study, of five skeletal samples, found three with unhealed compression fractures, perhaps inflicted by huge hailstones, although that conclusion is open to debate. In any case, across a range of centuries “it’s hard to believe that each individual died in exactly the same way,” said Éadaoin Harney, a doctoral student at Harvard and the lead author on the study. The individuals included children and elderly adults, but none were family relatives. Chemical signatures from the skeletons indicate that the individuals had significantly different diets, adding support to the notion that several distinct population groups are represented. If accounts of their journeys exist somewhere, none have been uncovered so far. “We have searched all the archives, but no such records were found,” Rai said. The researchers note that Roopkund Lake is situated on a route known to modern-day Hindu pilgrims, so perhaps some of the South Asian individuals died while taking part. But that is less likely to explain the presence of individuals from the distant eastern Mediterranean. Perhaps they weren’t actually Mediterranean migrants, Jarman said. Their genetic ancestry resembles that of present-day people from Greece or Crete, but current distribution may not apply to ancient populations. Regardless, this group came from somewhere far from Roopkund Lake, for reasons unknown. Maybe the site held significance for groups with various religious beliefs, Jarman said. Maybe some of the skeletons were brought for burial, possibly to be left in the lake. Or maybe there were ill-fated explorers — driven by a desire to see a spectacular mountain range, killed by their own curiosity. A few answers have begun to emerge, at least. Archaeology is full of such enigmatic sites, Reich said, and when science comes along and digs in, “it enriches the story in immeasurable ways.”

Tweets by @forbes_india
Hong Kong vs China: A complicated relationship, explained
Facebook's new tool lets you see which apps and websites tracked you