Uber raised $8.1 billion from its IPO, but the company and its bankers appeared to have misjudged how much investors would embrace the stock 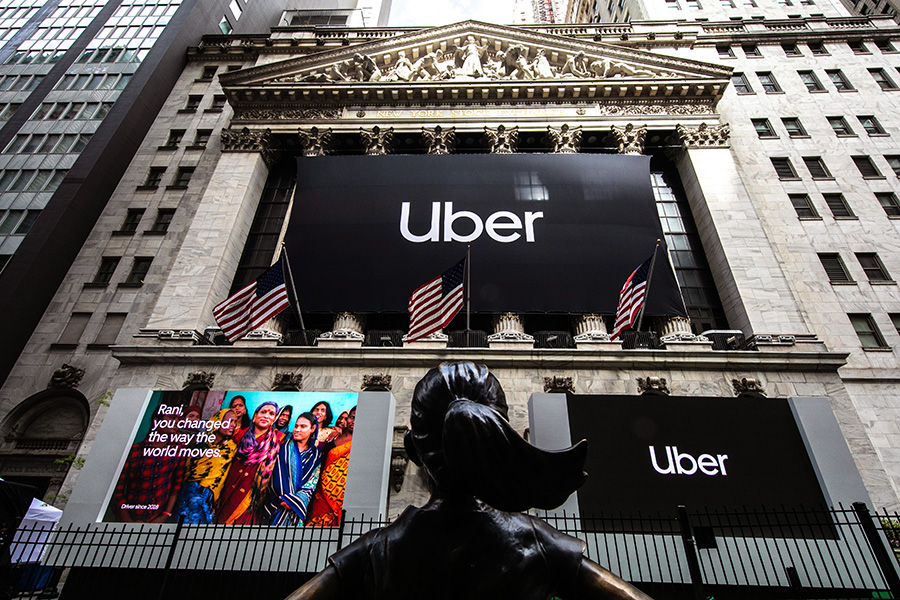 A banner bearing the logo of Uber adorns the exterior of the New York Stock Exchange on Friday morning, May 10, 2019. Uber, which made its stock market debut on Friday, is the biggest company to emerge from an age of smartphone apps. (Jeenah Moon/The New York Times)

Over the past decade, Uber changed urban transportation, disrupted entrenched taxi industries, defied regulators the world over and beat back questions about how it was altering the nature of work.

On Friday, it was tamed by Wall Street.

The ride-hailing giant’s first day of trading on the New York Stock Exchange began with a drop from its initial public offering price of $45, and its stock closed down 7.6 percent. By the end of trading Friday, Uber’s market capitalization, accounting for stock options and restricted stock, stood at $76.5 billion — barely above the $76 billion that private investors pegged it at in August.

Its stock tumble, which was highly unusual for what are typically carefully calibrated offerings, immediately raised questions about investor appetite for other money-losing tech startups that are poised to list their shares. It also pointed to miscalculations by the Wall Street banks that had taken Uber public and signified a disappointment for Dara Khosrowshahi, the chief executive, who was hired partly to steer the company through a successful IPO.

Few firms of Uber’s stature have stumbled so badly out of the gate as a public company. Other well-known tech brands, from Facebook to Snap to Alibaba to Lyft, all rose on their initial trades. Since 2000, only 18 companies valued at more than $1 billion and listing on American exchanges had opened below their IPO price. On average, tech stocks have jumped — or “popped,” in Wall Street parlance — 41% on their first day of trading over the past 24 years, according to Dealogic.

Uber raised $8.1 billion from its IPO, but the company and its bankers appeared to have misjudged how much investors would embrace the stock, which closed at $41.57. Last year, bankers said Uber could be valued at $120 billion upon its IPO, which would have made it the biggest American company ever to go public on an American stock exchange.

But that number declined in recent weeks amid questions about whether the deeply unprofitable company could make money. That was compounded by the performance of rival Lyft, which enjoyed a first-day surge when it went public in March but quickly fell below its IPO price, and which posted a huge first-quarter loss this week.

Uber’s debut was also marred by a volatile stock market. On Friday, the S&P 500 index was on track for its fifth consecutive daily decline and its worst weekly performance of the year amid worsening trade tensions between the United States and China. But even as the index rallied to end the day higher, Uber’s stock continued to fall.

For other tech companies moving toward the stock market — including the workplace collaboration company Slack and the fitness gear maker Peloton — Uber’s IPO is a warning that fast-growing but unprofitable firms may not be snapped up by investors as they have been in the past.

“This is going to cause some more caution in the IPO market,” said Matt Kennedy, a market strategist at Renaissance Capital, which manages exchange-traded funds that focus on IPOs. “Silicon Valley’s mantra of growth at all costs just does not fly on Wall Street.”

At the New York Stock Exchange, where Uber executives gathered Friday for the traditional bell-ringing ceremony to celebrate an IPO, the mood changed swiftly. What began as a buzzy morning shifted to anxiety as the numbers on the monitors that line the exchange floor began sinking — $44, $43 and finally $42, which was what Uber’s stock eventually opened at. The chatter dwindled, and voices hushed.

In an interview later in a small room off the exchange floor, Khosrowshahi said: “I think we came public on a tough day, and a tough week. But this is an incredibly resilient company.”

The chief executive referred to a quote from a famed financial analyst and economist, Benjamin Graham. “There’s the old Ben Graham adage: ‘Short term, the stock market is a voting machine, and long term, it’s a weighing machine,’” Khosrowshahi said. “So we’re going to focus on building our mass, and building our scale. And I think the market will follow.”

The first day of trading does not necessarily indicate how a company’s shares will perform over the long term. Of the 18 companies that opened below their IPO price since 2000, eight traded higher a month later and six a year later, according to Dealogic.

Uber is the biggest company to emerge from an age of smartphone apps, which began just over a decade ago after Apple introduced the iPhone in 2007. Other companies have adapted their businesses to mobile devices, but Uber was a mobile native, letting people hail rides with the touch of a button on their smartphones.

Along the way, it changed how people move around, allowing millions with no taxi licenses to become drivers without taking them on as full-time employees, an arrangement, known as “gig work,” which has led to labor protests and lawsuits.

Uber, founded by Garrett Camp and Travis Kalanick in 2009, began as a high-end black car service for the Silicon Valley elite. The app seized on the iPhone, which had an accelerometer, an electronic instrument used to measure changes in velocity, and later a global positioning system, which Uber used to help both drivers and riders navigate the world around them.

The app, first called UberCab, was born of Camp’s frustration at San Francisco’s lackluster transportation options and an unreliable taxi industry. After some urging, he tapped Kalanick to lead the company as chief executive.

Soon, UberCab became Uber. Growth exploded when the company introduced UberX, a low-cost option that hooked customers with bargain fares and a near-ubiquitous service that spread quickly across the world.

By 2014, the company had moved from noun to verb. To “Uber” somewhere meant to catch a ride, even as competitors with identical offerings popped up across multiple continents. Kalanick, known for his competitive spirit and no-holds-barred approach to capitalism, raised billions in venture capital, building a war chest to battle his rivals with subsidized, artificially lowered ride fares. By 2016, Uber’s valuation had soared well north of $60 billion.

The company ran into trouble in 2017. After years of cutthroat business tactics and a raucous culture rife with partying, harassment and other illicit behaviors, Uber’s reputation caught up to it. Kalanick faced multiple personal scandals, culminating in his eventual ouster.

Since then, Khosrowshahi, a former chief of the online travel marketplace Expedia, has made it his goal to clean up the troubled company. His motto has been to always “do the right thing. Period.”

The task has been difficult. Though the company has spent millions to improve its brand, Uber’s reputation remains tarnished for some users. It must also improve its relationship with drivers, some of whom went on strike around the world Wednesday to protest what they said were Uber’s unfair business practices.

And then there are the losses. Uber burned through nearly $2 billion in 2018 and does not expect to become profitable in the near future as it spends on ride-hailing and expansions into new businesses, such as Uber Eats, its food delivery service, and autonomous vehicles.

Khosrowshahi has not fully explained how Uber plans to eventually turn a profit. He frequently compares the company to Amazon, the e-commerce giant that lost money for years as it diversified into other businesses before using its platform to turn a profit.

Khosrowshahi and Kalanick had been at odds in the lead-up to the IPO over where Kalanick should stand in the NYSE during the bell-ringing ceremony. But that tension was defused Friday morning at a breakfast, where Khosrowshahi invited the company’s co-founders — including Kalanick — to be recognized for building Uber.

Later Friday, as rain started to fall on Lower Manhattan and after the tumultuous stock debut, some of the company’s longest-tenured employees said they still planned on attending Uber “O.G. parties,” with dinners and impromptu gatherings in the city, to celebrate.

Tweets by @forbesindia
Pakistan to accept $6 billion bailout from IMF
India Inc in 2030: Debt won't be a bad word