Urban Ladder to expand its offerings and footprint 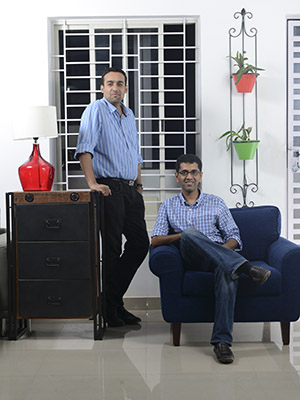 Urban Ladder, the online marketplace for furniture plans to invest more and increase its offerings for its home furnishing patrons. Part of the investment will be made in building and scaling up its technology platform. In the next four months it plans to expand its current tech team of 25 people to about 70. Overall it is targeting a total workforce of about 2500 including delivery and logistics team by end of this year from its current strength of 600 people.

To create real fundamental innovation and change you need to be deeply invested in a problem for a longer time: a mantra that Ashish Goel and Rajiv Srivatsa, co-founders of Urban Ladder, firmly believe in.

“This year is pivotal for us as we make a move from just furniture products to spaces where we provide a complete solution for the house including living and dining space, bedroom, kitchen, kids room, outdoor and balcony. We will provide the entire interior options such as furniture and furnishing. The complete offering will be launched by April-June quarter this year,” says Goel. In the highly commoditised ecommerce space where services can be cloned easily, innovation in offerings becomes crucial for scalability.

In the next few months they plan to launch new offerings, expand their portfolios and ramp up presence across cities. The company is targeting a total of 30 cities by the end of 2015. At present, it offers close to 4,000 products across 35 categories in furniture products such as beds, coffee tables, sofas, chairs, wardrobes, and dining tables.

The company claims to be “fairly well capitalised” to fund its expansion plans for the next 12 months. However, it did not divulge further details on its current fund raising options.

“We are increasingly moving towards being an absolute full-service solution for the home. You will not see us selling clothes. We will not be a fashion, books or an electronics retailer. I would rather be known for dramatically high quality of innovation in furniture,” says Goel, who is aiming to master the product and customer-service in the furniture business.

It is this focus which has attracted investors to park their funds into the venture. For an over two-year-old company, it has attracted one of India’s iconic corporate honcho Ratan Tata to invest in their venture. Last year in October, the chairman emeritus of Tata Sons, invested an undisclosed amount in the online furniture company, Ratan Tata’s second investment in the burgeoning Indian ecommerce space after Snapdeal in August 2014.

“He (Ratan Tata) felt that we are going in the right direction. He believes that there is a huge need for well designed furniture in the country and it is important for us to share our learnings around good design with consumers,” says Goel, adding that, “he (Tata) likes the furniture that we do and the way we present.”

Launched in July 2012, Urban Ladder, has managed to hit a sweet spot with investors in a fairly short span of time. By now, the startup has raised four rounds of funding that totals up to $27 million (excluding investment from Ratan Tata), from investors such as  Kalaari Capital, SAIF Partners, and Steadview Capital.

“We are not trying to be everything for everybody. That’s not in our DNA. We will concentrate on innovation in the space that we operate in,” says Goel.

The startup didn't disclose the number of deliveries a day, but claims an average ticket size of Rs 20,000 per order. Over the last two years, the company has grown at an average of 15 percent month-on-month. The company did not divulge the exact revenue of the company due to investor confidentiality.

Urban Ladder sees a huge potential for themselves and their competition, as India’s over $15 billion (estimate by industry experts) furniture market is largely unorganised. According to Goel, the online furniture business in the country is estimated to be just about $140 million (Rs 700-800 crore) providing enough scope for growth.

However, Goel is fully aware of the competition he’s up against: Urban Ladder competes with other established names like Pepperfry and Rocket Internet-backed FabFurnish. He even sees Ikea, the Swedish furniture major’s proposed entry as competition.

But, that doesn't worry him much.

“To be market leader in any category you need to be consistent based on a few basic principles. For us it is great customer experience, innovation across the value chain to bring down the cost and high quality product,” says Goel.

Tweets by @forbesindia
Wesley R. Hartmann: Where to Build a Better Brand - Television or the Internet?
Why calm can conquer and stress destroy