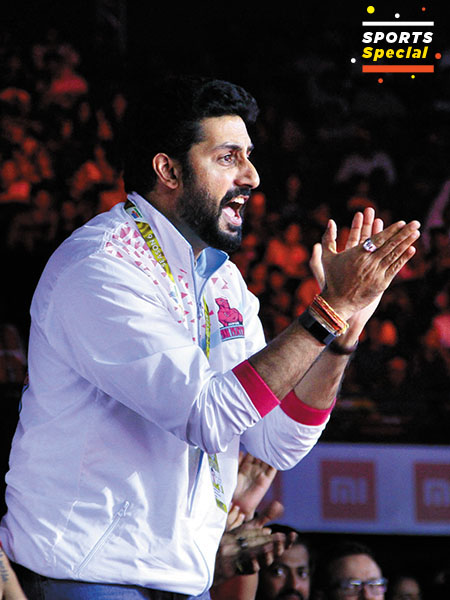 Billionaire entrepreneur Jeff Bezos once famously remarked that you don’t get to choose your passions in life; rather, “your passions choose you”. Ever since he was five years old—the same year when Neil Armstrong walked on the moon— Bezos has been passionate about space and everything around it: Rockets, engines, space travel. “We don’t get to choose them (passion)… you have to be looking for them,” the maverick founder of ecommerce company Amazon underlined. Bezos’s passion followed him, and in 2000, he founded space venture company Blue Origin.

For Bollywood actor Abhishek Bachchan too, the first tryst with his passion—sports—happened when he was a young boy in secondary school. In 1978, a Hindi film called Ganga ki Saugandh had his father Amitabh Bachchan portraying the character of kabaddi player Jeeva. “His (father’s) continuous and loud ‘kabaddi, kabaddi’ chant was quite unique,” Bachchan junior tells Forbes India at his home Janak in Juhu, Mumbai. He recalls that at the time, he got intrigued by the rustic sport and the hoopla around it. Later, his father taught him the game too. However, Bachchan, who spent most of his formative years in Bombay Scottish School, eventually got hooked to basketball and football. Kabaddi soon faded out.

Fast forward to 2014. As destiny would have it, kabaddi found Bachchan again. The actor, bought the Jaipur Pink Panthers team in Pro Kabaddi League, a professional kabaddi tournament run by sports management company Mashal Sports, in which Star Sports has a majority stake.

Passion and desire to do something with an Indian sport had driven the Bollywood star since the day he made his acting debut in JP Dutta’s Refugee in 2000. “It was just a question of finding the right opportunity,” says the 43-year-old. The decision to be part of the kabaddi tournament, he explains, was instinctual. Later in the same year, he also ended up co-owning a football team—Chennaiyin FC—in the Indian Super League (ISL).

The sports gambit, it seems, has started to pay off. The Pro Kabaddi League has not only become the second most-watched sporting event in India after the Indian Premier League (IPL), but the Jaipur Pink Panthers—which won the inaugural edition of the tournament—too has been profitable since the second season in 2015. Football, though, is still bleeding, despite Chennaiyin FC winning the ISL twice. Bachchan, however, is bullish about the prospects of football and his team. It (football) might not have the meteoric rise like kabaddi, but India will become a formidable football-playing nation, he says. He, however, declines to share revenue numbers for both his teams. 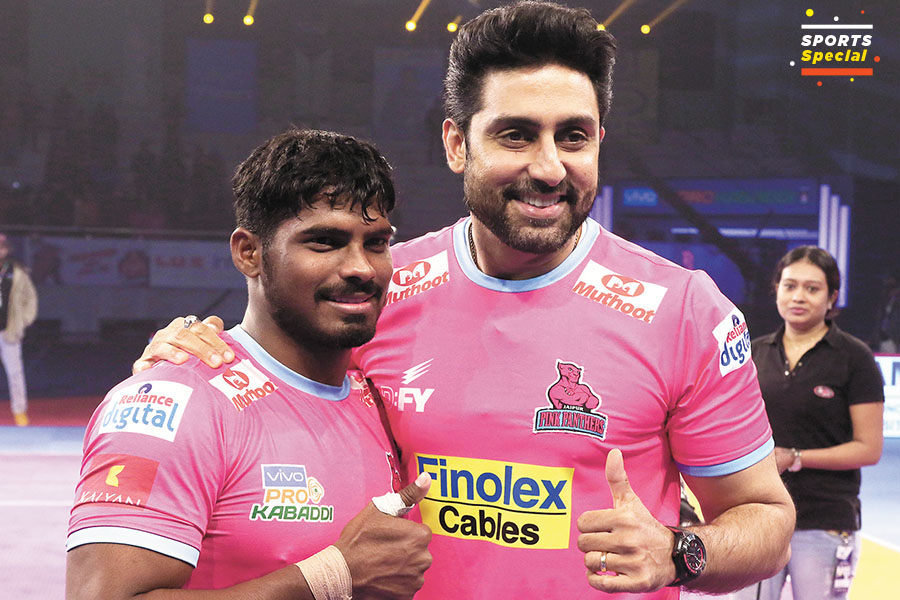 Bachchan believes that his transformation as a businessman has more to do with his instincts. The ‘business part’ of being an entrepreneur, the actor explains, is something that most people learn in colleges as part of a management studies course. “But entrepreneurship and acting can’t be taught. They have to be done with passion,” he adds.

Seven years ago, when commentator Charu Sharma—who co-founded Mashal Sports along with businessman Anand Mahindra—reached out to Bachchan at a social event asking him to look into kabaddi, the actor was stumped because he was under the impression that kabaddi was a rural sport played in mud. Intrigued by the thought, Bachchan decided to explore the idea further.

“I went to watch a couple of matches in the suburbs of Mumbai,” he recounts. What he witnessed left him spellbound. At certain venues, there were close to 8,000-10,000 people watching and cheering the players. “That’s when I decided that I had to be a part of this,” he says, explaining how the perception of kabaddi has changed over the years. Modern kabaddi, according to him, is fast, energetic and competitive. It is played on mats and is exhilarating to watch.

Back in 2014, however, kabaddi was still largely confined to rural areas, resulting in the new league finding no takers. For Bachchan to put his hat in the ring was nothing short of a leap of faith. “At the end of the day, passion and belief count a lot more than risk-taking ability for any entrepreneur,” he reiterates.

“ His spirit of a thinking investor, and an entrepreneur betting on his gut feel and passion makes him stand out.”
Harish bIjoor, founder, Harish Bijoor Consults

The stakes were far higher for Bachchan than for the other team-owners. “I was the only non-corporate in the Pro Kabaddi League. The rest were huge corporates,” the actor recalls. For corporates, the cost of running a team was perhaps equivalent to their monthly advertising budget, but for Bachchan, it meant signing “three films to bankroll it”.  The actor recalls: “I asked myself if I would be able to absorb the loss if the gambit didn’t take off.”

Kabaddi and football started as passion projects, but Bachchan put a business plan in place over the next few years. Advertisers were roped in, financials were worked out, a professional structure was put in place and the entire machinery was geared towards running it as a self-sustaining unit. Getting sponsors, to begin with, was not a challenge. Being an actor-celebrity who had thrown equity into the mix helped immensely. “It excited a lot of sponsors, though they didn’t shell out the kind of money we wanted them to,” he confesses.

The results for kabaddi started showing from the second season. “Kabaddi became profitable for me in 2015,” Bachchan claims, explaining that in the coming year, the renegotiation of media rights will be another watershed moment for the game. “Franchisees expect a big valuation, and a substantial growth from media rights,” he says.

While the IPL and Pro Kabaddi League see the best players in the world coming together in a tournament, the ISL doesn’t have globally popular players like Cristiano Ronaldo and Lionel Messi. Bachchan, however, is not worried. “That will take time… but football is also the future,” he says, explaining that one must be more patient with football. Some of the world’s oldest football teams, he adds, have been around for over 100 years. “I know football will take time (to be popular) in India. But I am confident, we will get there.”

Marketing experts say that Bachchan’s investment strategy is a differentiated one in the realm of league sports. “Backing kabaddi stands out as a differentiation vis-a-vis Bollywood’s fixation with cricket,” says Harish Bijoor, founder of an eponymous branding consultancy firm. Abhishek’s decisions as an entrepreneur, he explains, also help Bachchan junior step out of the larger-than-life shadow of his father. “His spirit of a thinking investor and an entrepreneur betting on his gut feel and passion makes him stand out,” Bijoor says.

Early exploits don’t guarantee future success. Despite initial success as a sports entrepreneur—with his kabaddi team winning the inaugural championship, and Chennaiyin FC bagging the ISL trophy twice—Bachchan’s teams have not had a great run of late. Losses in the last few tournaments have dented the image and the morale of his team. “We have put together a great team, which, for some reason, hasn’t clicked. It’s crushing. It’s heart-breaking,” he says.

Bachchan, though, doesn’t want to read too much into the poor form. Reason: He is banking on his emotional involvement with the team to bring it back to winning ways. “Being an owner is like being a parent. You enjoy the wins and the losses,” he says. The people who have faced failure, he believes, are the ones who can dig deep down and draw inspiration to make that winning shot. “Failure teaches you what you don’t want to do,” he says, adding that he doesn’t like losing.

Another aspect of losing that Bachchan doesn’t like—something which most new-age entrepreneurs flaunt as a prized possession—is wearing failure as a badge of honour. Reason: Talking about failure too much sends a signal that it’s okay to fail. “It’s not okay that you failed. It is something that you don’t want to happen,” he adds. Failure, he says, is a badge that one should remember not to duplicate.

After all, for the entrepreneur in Bachchan, the biggest fear is not losing, but to ensure that accepting the loss doesn’t become a habit. “When you win, you are confident, and you want to keep winning,” he says. But when the going gets tough, staying inspired becomes demanding.

During this time, drawing inspiration from the acting career of his father keeps him and his team going. “I have seen the great Mr Amitabh Bachchan go through the highest highs and lowest lows. But he never gave up,” he says. “I wasn’t brought up to give up. We Bachchans are fighters,” he asserts.

Tweets by @forbesindia
The myth of perfectionism
Cobots are the tools of the future: Pradeep David of Universal Robots