Can Kavin Bharti Mittal save Hike?

Mittal's messaging app, Hike, had a turbulent ride over the past few years, but is now focusing on two verticals to infuse new life into the company 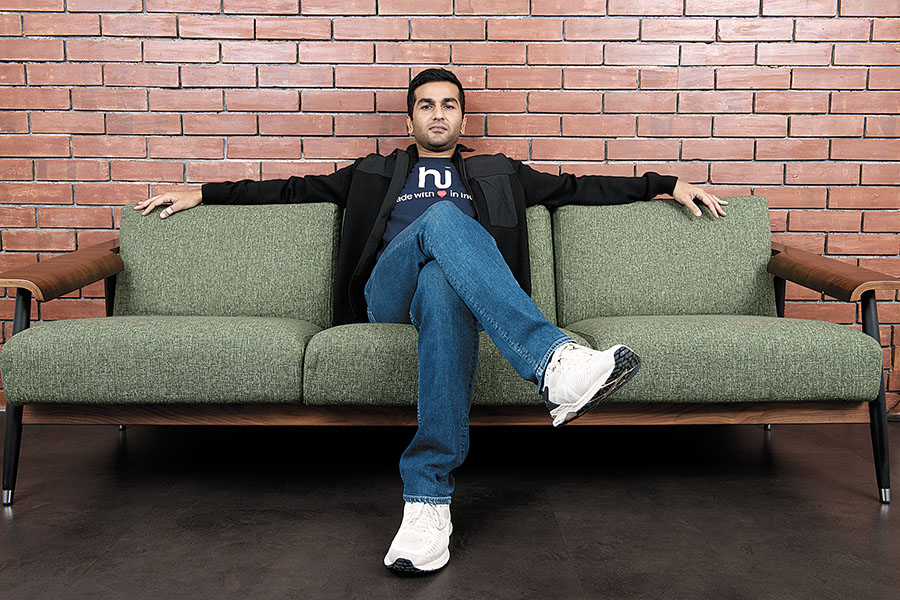 Kavin Mittal is a fighter at heart. The sort who, despite being bruised, is always ready for battle.

The past few years have been tough for Mittal and his messaging service startup, Hike. In 2016, it had become the darling of the startup ecosystem when it became the fastest unicorn in India. The New Delhi-headquartered company, promoted by telecom tycoon Sunil Mittal’s son, reached a valuation of $1.4 billion in three years and seven months, after raising $175 million from Chinese internet giant Tencent Holdings Ltd and Foxconn Technology Group of Taiwan.

“We were flying high as the company was doing extremely well,” says Mittal. “We got to about 30 million monthly active users with nearly 10 million daily active users by 2016, and in less than four years, Hike became the fastest billion-dollar company in India.”

By 2017, however, Hike began to lose the plot. That year, its staff strength swelled from about 140 to 380, it acquired two companies, diversified into new areas including payments, and became a super app—a one-stop app for many apps. All that, along with a change in the working culture at Hike, spun things out of control. Before Mittal could address concerns, Hike was on its way down. But 2019 was different. Last year, the 31-year-old and his team regrouped to narrow down its business model in an attempt to build the company for the coming decade.

Now, Mittal is betting on two verticals: Winzo, a company that Hike invested in last March, which was founded by Zo Rooms founders Paavan Nanda and Saumya Singh Rathore in 2018; and then there is Hike, the social platform where Mittal wants to create a virtual world and better user experience using what the company calls HikeMoji, an avatar or virtual clone of oneself.

“We think it’s time for the next generation of social products to emerge and those will emerge in the form of vertical communities because as more people come online, people want niches and private spaces to hang out online,” says Mittal.
“It had gone after everything in the past and from that perspective, the focus on the two verticals of gaming and HikeMoji is good,” says Yugal Joshi, vice president at Dallas-based consultancy firm, Everest Group. “Eventually execution is key.”

What went wrong?
Much of Hike’s existential crisis was because of the company spreading itself too thin. Mittal set up Hike in 2012 when India was moving from personal computers and feature phones to high-speed internet and smartphones. It had about 44 million smartphone users then, which swelled to over 450 million by 2019.

“When we set up Hike, India was a different place,” says Mittal. “We were in the era of 2G and 3G, and data was expensive. People were buying data in sachets and smartphones had just about arrived on the scene.”

Mittal positioned Hike as an India-born messaging app. Over time, it became the ‘top free app’ on the Android Playstore, iOS Appstore and Windows Store, across India. By 2015, it offered various features, including hidden and offline chat, and stickers, in addition to news, games and cricket scores. It also began to lay the groundwork for becoming a super app, along the lines of WeChat, where it offered services such as messaging, news updates, digital payments and cab bookings. “Early smartphones were pretty low-end and the high-end ones couldn’t download too many apps,” says Mittal, explaining why Hike aimed to be a super app.

However, by 2016, India’s telecom landscape was in for a big shake-up. Mukesh Ambani, chairman of Reliance Industries (owner of Network18, the publisher of Forbes India), launched Reliance Jio, a telecommunication company that offered the world’s cheapest internet data at ₹50 per GB. “Prior to Jio, the market had stalled. We were so deeply penetrated that we had to grow the market and that’s where the idea of Hike Total came,” says Mittal.

Hike Total, launched in January 2018, uses its proprietary technology to send messages, recharge data packs and deliver news updates and live scores without an internet connection. It was exclusively available on handsets Hike partnered with, including Intex and Lava.

Around the same time, the company also launched its payments platform; by integrating the UPI platform, Hike allowed in-app transfers between two banks. “A few months after launching the payments platform, we realised it was the worst way to build a business because people were just searching for cashback and discounts,” says Mittal. By then Hike was doing between 3 million and 4 million transactions per day, says Mittal.

Jio’s launch, which enabled millions of users to adapt to the internet, began to hurt Hike. “We rolled the payments platform and Total back fast because Jio launched,” says Mittal. “With practically unlimited 4G and smartphones getting very good, the smartphone could now handle 50 apps, and there was no need for a super app.”

In the meantime, in 2017, Hike acquired two companies—Creo, which made HDMI media-streaming devices, and Pulse, a social networking app—to ramp up its super app offering.

Realisation dawns
By 2018, Mittal knew Hike wasn’t on the right track. “We said we need to backtrack. If you’re not building a super app, you can’t get 350 people doing all these projects,” says Mittal. The company cut the team strength to about 120. With India’s smartphone industry booming and people spending time online, Hike knew that the next phase of growth would come from vertical communities, with specific focus on activities such as fitness and gaming.

So, in 2019, Mittal announced plans to unbundle its super app business and rolled back its payment platform. “In hindsight, our culture got messy,” admits Mittal. “It’s also the reason we produced bad products. Because great culture is an input to great products. A lot of people working on ecommerce companies were not the best fit at Hike.”

With vertical communities in mind, Hike bought a large stake in Winzo in March 2019. “It’s an online arcade built for the masses,” says Mittal. From games such as carrom to stick cricket, it allows waging bets. Mittal says its user base comprises millions, with people spending nearly an hour on the platform.

Winzo isn’t available on app stores and is distributed separately. “We are now sitting in a completely separate category, which has little competition and it’s doing incredibly well,” says Mittal. He claims Winzo has grown by over 20 times since the investment and continues to grow at 15 percent a month.

Taking a Hike
With Winzo establishing a gaming avenue for the group, Mittal and his team spent much of last year trying to redefine Hike’s messaging format. In April 2019, it launched Hike Sticker Chat to reduce people’s dependency on the keyboard. “Now we have millions of stickers,” says Mittal. “We built machine learning in a way where you can get the right sticker at the right time for the right relationship.” The company also renewed its focus on building a niche for itself. “Hike has always been a place for close friends and significant others, and because the market has suddenly become so big, doubling down on this niche makes a lot of sense.”

With India having over 400 million smartphone users, Mittal believes even if 20 percent of them choose to have their private space, Hike could potentially see a user base of 80 million. “That’s a pretty big space to play in,” he says.

“In 2020, with new technology at our disposal, why are people still hanging out on a list of chats, on a chat thread?” asks Mittal. He is now gearing up to launch HikeLand, something he calls a safe place for one to hang out with, where relationships can be built and deepened around experiences online. “It is about building a virtual world,” says Mittal. At the centre of that would be HikeMoji—a virtual clone of oneself—that the company launched last November.

Experts believe that Hike is on the right path. “With augmented reality and virtual reality becoming crucial in 2020 and 2021, the focus on gaming and virtual avatars is a step in the right direction,” says Tarun Pathak, associate director at Counterpoint Research. “It will be able to monetise gaming in a big way, and with a large millennial user base and a focus on a niche, it has the right target audience.”

Will this help?
With these plans Hike is laying the foundation for a strong revenue-led growth. Mittal is banking on the virtual economy, led by a deep understanding of human psychology, for that. “People spend money on stuff that they don’t need. That is likely to happen in the online world too,” he says. “You will want to start curating your online self equally, if not more than the offline self.”

That’s easy in Winzo as it’s a gaming platform. “I can bet ₹5 and you can bet ₹5 in a challenge and Winzo keeps an amount of that. This is the business model,” says Mittal. He also takes a cue from investor Tencent, which makes nearly 80 percent of its revenue from virtual goods. “Facebook makes 95 percent of revenue from ads,” Mittal says. “In China, people started spending money online as a sense of pleasure. So Tencent’s money is made from the virtual economy, their avatar programmes. People spend money in the virtual world to become better and compete with other people.”

Companies such as PubG and Fortnite have been following a similar model and raking in billions. “In a market like India the desire to get online self-worth is much higher. Human beings are all status-seeking people,” says Mittal. On Hike, he believes, people will start demanding exclusive items for their avatars. “We thought we’ll get there eventually, but people are demanding it now,” says Mittal. “Can we bring Zara on board and sell t-shirts for ₹2? In our virtual economy, the most expensive item will be no more than ₹100 to ₹200.”

“It has a renewed focus on monetisation, which works out well. Indians, too, have begun warming up to avatars and their branding. Scaling up, meanwhile, will be something to watch out for, especially since the life cycle of an innovation remains short,” says Joshi of Everest Group.

Faisal Kawoosa, founder and chief analyst at consultancy firm techARC, reckons that while gaming provides an opportunity to scale up, HikeMojis continue to remain niche. “I think, it has exhausted most of its capabilities,” he says. “As far as stickers and emojis are concerned, these are models that can be replicated. But there has been a massive gap in the Indian gaming space and that is an opportunity for Hike.”

Where does that leave Mittal? “The sure shot way for companies to die is to stop innovating,” says Mittal. “Our understanding of the markets and desires and capabilities have gotten much better.” And with 5G services likely to be rolled out soon, he believes he has to walk into the unknown to find new insights that nobody has found and use them to innovate. “We are excited about the future,” says Mittal.