'Siddhartha has assets at least 10 times his debt'

No trace of Café Coffee Day's VG Siddhartha yet; three-tier search operations are on in Mangaluru, a city left puzzled with his disappearance 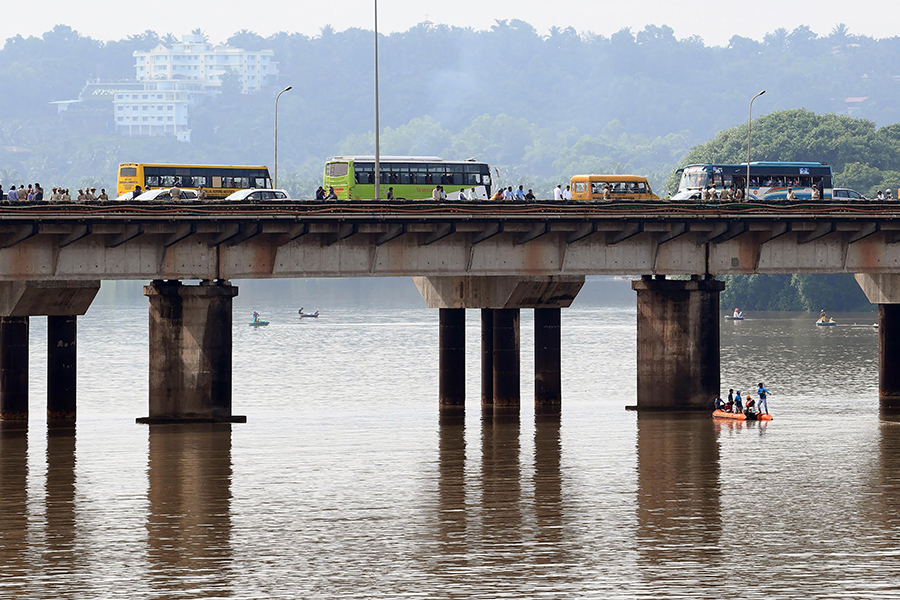 Mangaluru: The coastal city of Mangaluru went into shock over the disappearance of the Coffee Day top boss VG Siddhartha, 58. Search and rescue operations, headed by the Indian Coast Guard (ICG), are in full swing. The ICG and Coastal Police, with the help of local fishermen and river-bank experts, have been on the hunt since 3 am on Tuesday, said Sasikanth Senthil, deputy commissioner of Dakshina Kannada district, who is overseeing the operations. Suspicions are that Siddhartha jumped off the Nethravati bridge into the river.
Siddhartha is also the son-in-law of former Karnataka Chief Minister, SM Krishna. Local fisherman Anwar Ahmed and his friends were angling—the pastime of fishing with a rod and line—at 6 pm on the southern side of the river. They say they had seen a man looking down the river, and then jumping into it a few seconds later. They tried to throw a net to get him out, but could not do so as the current had already picked him up. The police, fire department and the ICG officials have confirmed that all they can do now is to search.  With the rain letting up on Tuesday, the search operations were not hampered. “But that did not help much as the water was muddy and divers could not see beyond a few feet despite underwater lights. Three motorised dinghies, one hovercraft and an ICG ship have been deployed for the rescue operations. One helicopter was expected to join the search operations from the Goa base of ICG,” SS Dasila, the commander of the Coast Guard (Karnataka) told Forbes India.  “The search cannot continue once darkness sets in at 7 pm on the river surface, or if it rains. However, we are ready with powerful lights even for night operations on both sides of the river and near the backwaters,” Hanumantharaya, deputy commissioner of police (law and order), told Forbes India. Three more Coast Guard teams are expected to join soon. Local divers who have taken part in similar search operations in the past said that in the monsoon, the river current is so strong that it can change direction at any time. As a result, bodies have been found even kilometres away on the Kerala side at Manjeshwaram, or even closer at Kotepura or the backwaters near Mangaluru city.  Siddhartha, who studied at St Aloysius College in the city, has large landholdings on both sides of the Nethravati river. His close friend, UT Iftikar, told Forbes India, “He does not have to take an extreme step for financial problems, as he has assets at least 10 times his debts. He has landed property of over 15,000 acres for urban, plantation, estate and recreational projects in many countries, and a series of resorts at tourist destinations. I still do not know why he would choose this. Perhaps he has a sentimental attachment to this place as it is bang in the middle of two large plots of land he owns.” Yathish Baikampady, a local fisherman and an admirer of Siddhartha, said, “The place where he has allegedly jumped is deep during the monsoon and that makes the search more difficult. Youth from the fishermen community have come in big groups to aid the search operations,” Baikampady said.