Nachiket Mor: The Business Of Morality 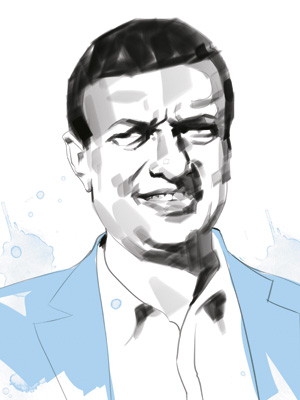 Nachiket Mor
The Man: The chairman of IFMR Trust opted out of the race for the corner office of India’s largest private bank to work in the social sector; the man behind several innovations in rural finance, and now rural health care. He tells us about the role of civil society in ensuring high standards of corporate governance.

The Oeuvre: Radical. Passionate about the rural sector. Went all out to make sure people at the Bottom of the Pyramid (BoP) could avail of banking services. Right now, SughaVazhvu, his latest venture, is trying to replace doctors with nurses and human judgement with software solutions. Believes in the power of technology.

The Message: We need neutral, tenacious civil society actors with the capability to deal with the underlying complexity of managing a business for the long term.

So What?
Maximising profits comes with a caveat. In the pursuit to maximise profits, a business can be subverted by those who seek to survive in the ecosystem. Therefore, a specialised set of Civil Society actors need to emerge that have the tenacity to stay the course, the capability to deal with the underlying complexity of the issues involved, and the required level of neutrality. Examples of such actors exist in South Korea and the United States that have persuaded large firms to engage in constructive dialogues that eventually benefits the average citizen.

In India, businesses and businessmen, particularly from the private sector, have always been viewed with some suspicion. Given our underlying socialist ethos, this is perhaps not surprising, but in recent times, this has worsened with reportage about the various means that some businesses have used to gain an advantage, be it bribing government officials and elected representatives, indulging in coercive practices with their customers, misusing monopoly power, concealing information, or ill-treating employees.

Businesses may be thought of as bundles of resources, both human and financial, that exist to address specific societal problems. The revenues and the profits generated by a business are intended to be a joint measure of the importance of the problem being solved and the skill of the business at solving it. Viewed in this manner, highly profitable businesses would indeed be the ones taking on the largest problems of society in the most skilled manner and would therefore need to be celebrated as such, instead of being vilified.

It also follows from this construct that the only moral responsibility of a business would be to maximise its profits because doing so would require it to maximise its contribution to society. In practice however, while businesses that thrive over the longer term do tend to adhere more closely to this vision, there is no question that this utopian capitalist ideal is capable of being subverted by managers and investors who discover flaws in the regulatory mechanism and seek to survive and grow by exploiting them, instead of focussing their attention on solving ‘real’ societal problems.

Profitability in this context becomes an insufficient metric of the morality of a business. Managements cite the tyranny of the quarterly analyst meeting as an explanation for the unwillingness of managements to chart out any longer-term course and to engage in activities which have no strategic purpose and which could even potentially destroy value, merely to meet a quarterly target. My personal experience of seasoned investors and analysts who control billions of dollars of investible funds is entirely at variance with this image. They tend to be well aware of the realities of running actual businesses and while they are performance conscious, they will patiently stay the course, where they believe there is true long-term value being created.

Managements often tend to create these problems for themselves by not being transparent with investors, about the true nature of the performance of the business. They constantly seek to maintain an overly positive and sunny stance in the mistaken belief that this will help their performance to be viewed more favourably. Boards and regulators often compound this problem by not insisting on more transparency in reporting, in part owing to their own inability to understand the true nature of the business, but also in part because they are concerned that it may reflect poorly on their own competency at not having foreseen a problem ahead of time. Incompetent and ineffective boards, and incompetent, and sometimes conflicted, regulators are where the major problems truly lie. This is particularly the case where public sector providers are also regulatees or where detailed rule-based regulation is the norm.

In India, we have an additional set of problems with the government, as a majority promoter-shareholder in several sectors, behaving less like a neutral custodian of the long-term national interest, but more like a regular business entity with the added ability to use its policymaking power to protect poorly performing businesses owned by it or to pursue short-term populist agendas to the detriment of entire sectors. For all of the reasons mentioned earlier, I feel that efforts at improving corporate governance or ethical standards of corporates, which principally rely on these issues being resolved in a spirit of volunteerism by managements or boards or by the regulator being more actively involved have, not surprisingly, met with limited success.

Very broadly, there are two sets of governance issues that one needs to be concerned about. The first set are those which could potentially allow managements to subvert the market-ethic by hurting investors and other more directly engaged stakeholders such as workers and customers. The second set comprises those issues which may benefit investors and perhaps even the more directly engaged stakeholders such as customers, but at a substantial longer-term cost to society at large. For each of the two sets of these issues, it is my firm belief that a specialised set of civil society actors need to emerge that have the tenacity to stay the course, the capability to deal with the underlying complexity of the issues involved, and the required level of neutrality.

Solidarity for Economic Reform (ser.or.kr ) in South Korea, is a good example of the first type of organisation that over the last decade, has run a successful campaign to improve the governance standards of the South Korean Chaebols such as Samsung and Hyundai, using a variety of tools available to them. The Environmental Defence Fund (edf.org ) in the US is an example of the second type that was, for example, successfully able to persuade McDonald’s that the polystyrene clam-shells had to go and be replaced by packages made from recyclable materials such as unbleached paper. Both these organisations go to great lengths to preserve their independence from the corporate sector and have had the benefit of widespread support from individual donors that respect and value their work.

The emergence of such high quality civil society efforts and the willingness of the average citizen to fund them through small, but regular donations are going to be critical if we are to mount a sufficiently aggressive challenge to these issues in India which have all the characteristics outlined earlier.