From his mother’s home-designing business, the managing director of Biba has now built the company into a pan-India brand with an eye on the global market 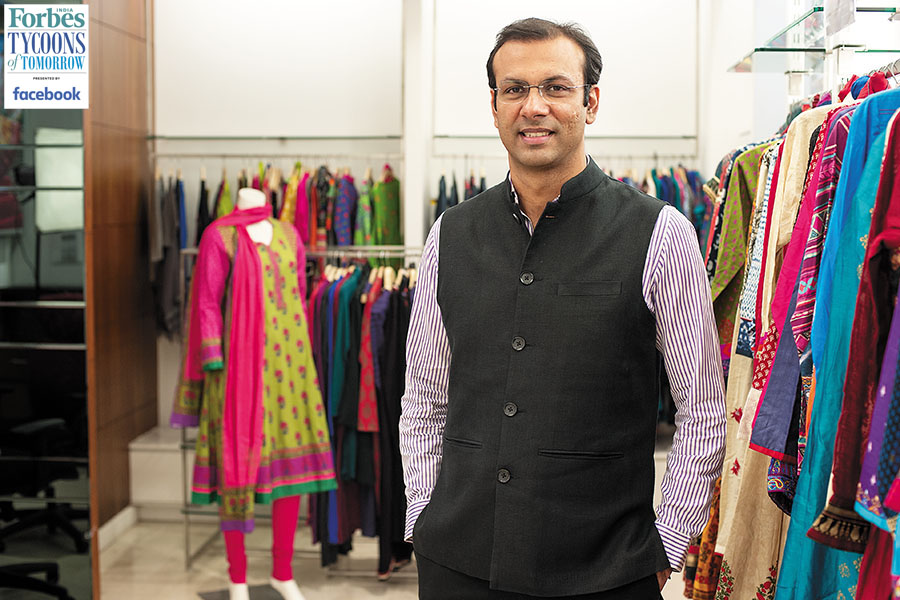 Besides being managing director at Biba, Siddharth Bindra is also a farmer and supplies iceberg lettuce to McDonald’s
Image: Amit Verma

Siddharth Bindra dons many hats. The managing director of women’s ethnic wear brand Biba is also an avid sportsman; even at 43, he continues to play cricket every weekend, with a team he has built over 15 years. But, perhaps none of those can match his farming skills, an expertise that links him directly to McDonald’s, the world’s largest fast-food chain.

Bindra’s foray into farming began around the same time he joined his mother’s fledgling fashion business in 1998. Today, Biba has considerable sway in the ethnic wear market in India and he is taking rapid strides to take the brand global. The company already has over 260 stores across 100 cities in India, and Bindra has laid the groundwork to raise that number by another 200 in the next three years. Last year, it produced over 6 million garments.

“I think fashion is ever evolving,” he says. “The market opportunity keeps getting larger and larger. Ethnic wear is still a very unbranded space. There’s a lot of consumption yet to happen.”

By his own assessment, the company only controls about 1 percent of the entire ethnic wear market in India despite being a market leader. “If you take the top brands globally, they control between 4 and 8 percent of the market share. That’s what we should target,” says Bindra. “That would take the topline over ₹3,000 crore.” At present, the company’s revenue stands at ₹500 crore, according to the ministry of corporate affairs.

It’s a far cry from when his mother Meena, a housewife, started out by designing salwar kameezes from her house. She took a loan of ₹8,000 that Bindra’s father, a former navy officer, helped arrange. That was in 1982. Back then, the salwar kameez, or Punjabi suit as it was commonly known (Biba is a Punjabi word for a pretty girl), was mostly restricted to northern India, particularly Punjab and Delhi. “With the money that my father helped her raise, she did a few exhibitions and it was an instant success,” says Bindra.

Her designs took retailers by storm, and Benzer, then one of the largest stores in Mumbai, contracted her to stock her products at their three outlets. Over the next ten years, as India’s economy liberalised and the retail industry grew rapidly, more retailers went looking for her products. By then, her reputation had grown and her company emerged as a wholesaler. The fact that it was the ’90s, a period when more and more women were joining the workforce and taking to the salwar kameez for functional ease, helped the business boom.

Siddharth, who meanwhile had finished college, was looking to go abroad for an MBA, a move that he felt was enough to land him a consulting job. He had also completed a six-month course from Harvard University in future options, derivatives and capital markets, laying the groundwork for his degree. “The idea was that I would go to one of the top 10 business schools in the world,” Siddharth recalls. “So I took the GMAT. But then, if you needed to get into any of the top universities, you needed at least two years of work experience. That’s when I decided to help my mother.” That break was the turning point. “I began liking the work.”

Over the next few years, the mother-son duo worked in tandem to establish the brand further. In 2002, Biba became a household name when Kishore Biyani, the retail magnate, decided to produce a Bollywood movie, Na Tum Jano Na Hum, and the company was roped in to produce its merchandise. “We were the first company to do official Bollywood merchandise,” Bindra says.  “We rocked it.”

Over the next five years, Biba made official merchandise for 10 more movies, including Devdas. “That helped us tremendously with brand building. We also simultaneously started a shop-in-shop concept in which a store is set up within a store, mostly at malls or retail chains.”

Since then, there has been no looking back. With the setting up of shop-in-shop, Biba went from a wholesaler to a retailer and in 2004, it launched its first standalone store in Mumbai’s Inorbit mall.

By 2007, Biba had 25 such stores, but the Bindras also realised that retail is capital intensive. That year, they raised ₹12 crore from Biyani. “We grew to 80 stores with that fund.”

With the rapid growth, Biba also began to diversify its portfolio. By 2011, it had added a kids category, and in 2014 it roped in fashion designer Rohit Bal to create a new line of designer wear.

“Along the way, business progressed from products to mix-and-match to girls’ wear,” Bindra says. “Today, we are a comprehensive portfolio of women’s wear that ranges from ₹800 to ₹25,000. Our first store was 600 sq feet, and now our stores are 2,000 sq ft on an average. We have just set up our first 5,000 sq ft store in Vijayawada.”

In 2013, when Biba’s revenues had grown over ₹300 crore, Biyani exited the company and PE firms Warburg Pincus and Faering Capital stepped in to buy stakes for nearly ₹300 crore. The deal valued the ethnic wear maker at nearly ₹1,000 crore. “In 2013, that acquisition helped the category,” Bindra says. “Nobody had made money in retail. We provided the first profitable exit. That’s when people realised that brands are here for good, that they are profitable and here to grow.”

In the luxury segment, the company has tied up with designers Anju Modi and Manish Arora. The premium category contributes 90 percent to the company’s revenues. Bindra is also looking to add newer categories, including accessories such as jewellery, footwear, and bags.

“Biba has been able to build a strong brand for itself,” says Harminder Sahni, founder and managing director of Gurgaon-based consultancy firm Wazir Advisors. “But fashion is ever evolving. These companies shouldn’t limit themselves to just being ethnic wear makers. Women will always buy new clothes, and hence they must look at the market from a wider perspective to grow.”

Biba has also started an affordable arm, Rangriti, that Bindra reckons has the potential to emerge into a ₹500 crore business. Rangriti currently has close to 60 stores across the country. “The market is so underserved,” Bindra says. “We have over 650 districts and everybody wears ethnic clothing. Rangriti is doing well across so many places in the interiors.”

India’s ethnic wear industry is currently pegged at over ₹82,200 crore and is expected to grow to ₹1,26,210 crore by 2019, according to consultancy firm Technopak. The market is dominated by women’s ethnic wear at 83 percent. “Companies like Fabindia and Biba have been the torchbearers of the Indian ethnic wear industry for long,” Ankur Bisen, senior vice-president of the retail and consumer products division at Technopak, says. “So far, they have had momentum on their side, but there are newer entrants. A brand like Biba may be out of reach for a huge section of the population, and affordability is a huge factor. That’s where Rangriti has potential.”