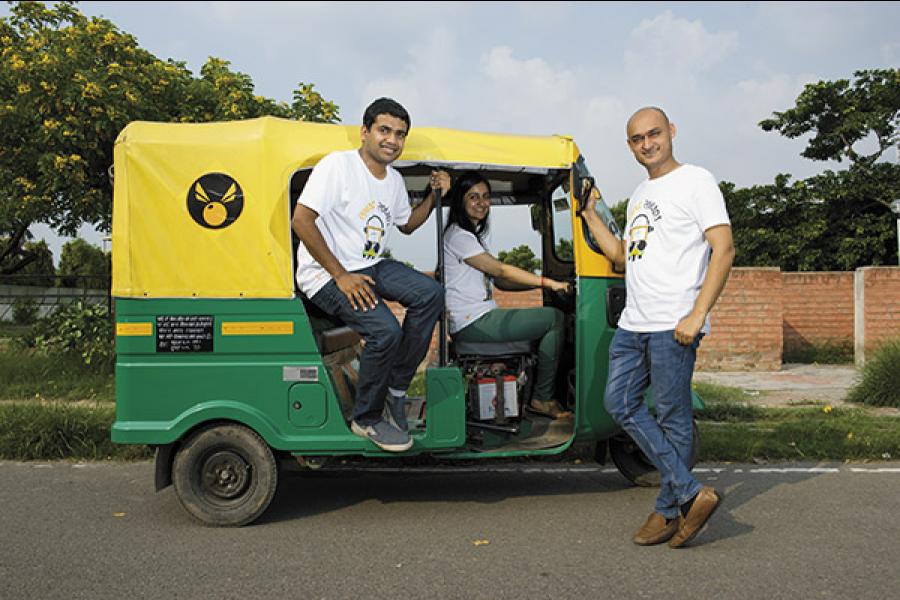 Art of War 101, yaar,” says Samar Singla, with a smile. “Don’t fight on your enemy’s strengths. Fight them where they’re not there.” We’re in an office in Chandigarh. Singla, who is the co-founder and CEO of Jugnoo, a company that enables users to hail autorickshaws through its platform, is seated at one end of a long table, next to a wall with splashes of colour. Given the setting, the reference to an ancient Chinese military treatise should sound peculiar. But, it doesn’t.

In November 2014, when Singla and his former IIT-Delhi classmate Chinmay Agarwal launched Jugnoo, they were entering a veritable battlefield. The ‘taxi wars’ between Bengaluru-based Ola and global heavyweight Uber had just begun to heat up, and the autorickshaw segment seemed like a natural extension. It singed Jugnoo in its early days: While Ola had unveiled its auto-hailing services a month before Jugnoo’s launch, Uber followed suit in early 2015. Naturally, investors were sceptical and Singla has no qualms admitting that, at least in theory, they were “a company that shouldn’t have existed”.

It’s a statement that belies its actual implication. A humble brag, if you will. Jugnoo is present in 40 cities across 13 states, claims to service about 40,000 rides a day and has close to 12,500 drivers on its platform. The numbers might look piddly next to Ola’s claim of 120,000 drivers across more than 70 cities, but in under two years, Jugnoo has managed to raise a total of $16 million in funding from investors including Paytm, Snow Leopard Ventures, Rocketship.vc and others.

This is where Singla’s The Art of War theory kicks in (never mind its literary accuracy). “When you’re a company that shouldn’t exist, but you are thriving, that means you’ve cracked something that most people don’t know about,” he says. It’s what Singla’s betting on: Jugnoo’s ability to find “pockets of profit” outside mere ride-hailing, instead of going up against a larger competitor head-on.

The first such pocket is hyperlocal delivery, utilising idle autorickshaws on its platform to deliver perishable products quickly. Its first such foray into the segment last year was shortlived because of the sudden inflow of money and steep discounts that occurred in the segment. That was also the time some significant players like Tiny Owl and Pepper Tap shut down. “The main issue was unit economics, which made this business relatively unviable,” says Anil Joshi, managing partner at early-stage venture capital firm Unicorn India Ventures.

Things have changed since, believes Singla. With the exit of several startups, the discounting has abated. Enter Fatafat, Jugnoo’s business-to-consumer autorickshaw delivery service that was launched in May and is so far present in Chandigarh and Gurgaon. There is also a renewed focus in terms of the items—Fatafat will be focussing only on selected “problem items”, namely fresh fruits and vegetables, which have higher margins than other grocery products. “When you’ve got this ubiquitous vehicle, it makes sense to use it in other ways,” says Chris Kolenaty, founder, Snow Leopard Ventures. “And if you can figure out that model and what specifically you want to put inside that vehicle, then you’re solving multiple problems at once.”

The second pocket Jugnoo is looking to exploit is in the business-to-business logistics segment. Launched in June, Jugnoo’s Dodo Deliveries works as a logistics solutions provider for vendors to supply a variety of goods to their customers. This would not be limited to certain groceries, as is the case with Fatafat, but also extend to pharmaceuticals, hardware and more. For this, Jugnoo will look to utilise both its existing autorickshaw network as well as other channels, such as motorcycles and commercial vehicles.

From the company’s perspective, it’s a great way of better utilising the existing supply of autorickshaws. “It’s a harder challenge,” says Kolenaty. “You have to train the drivers. But I think it makes more sense to use this vehicle for moving passengers and products, rather than using another vehicle.”

Although Fatafat and Dodo are still nascent, the initial signs, the company claims, are promising. “Our hyperlocal deliveries have been profitable from day one,” says Isha Singla, co-founder and chief process officer at Jugnoo.

Says Dhananjay Sharma, an associate consultant at Bengaluru-based research and advisory firm, RedSeer Consulting, “They don’t have the dedicated force problem.” Hyperlocal delivery services also need to account for things like employee compensation and the common practice of poaching employees. “Jugnoo doesn’t have to worry about all that because their hyperlocal play is providing an alternative source of income to its drivers.” Besides, he adds, “right now, most hyperlocal services are failing. That is an opportunity.”


Meanwhile, the company continues to differentiate itself in the ride-hailing business. And this is a landscape that is much more competitive than its logistics services. Though Uber suspended its autorickshaw operations late last year, Ola Autos remains and is Jugnoo’s biggest challenger. Smaller services like mGaadi (which was recently acquired by Yatra) and Autowale make up the rest of the segment. And while Singla claims that Jugnoo services a higher number of daily rides, RedSeer’s Sharma says that as per their study, “Ola is the clear market leader right now”.

Ask Singla what sets Jugnoo apart from its competitor, and he replies immediately: “Focus”. The company, though present in larger cities, chooses to focus on tier-II and tier-III towns. But the focus isn’t limited to geographical presence. “We just focus. Our core team is just 10 people. In a startup, you can’t have a complicated problem statement. Uber and Ola have so much of their own chaos that they’re fighting a death battle.” There has been some friction between Ola and Jugnoo too, with the latter alleging that interns from Ola had been booking rides on its platform and then cancelling them. Singla finds the attention given to conflicts frustrating. “I don’t understand why venture capitalists and the media are so obsessed with competition,” he says. “Five million autos; thirty million rides a day; we do 40,000 rides a day. They’re irrelevant numbers.” The potential to scale, he insists, is huge, and only when companies reach a certain scale will competition matter. “What I prefer to focus on is new technology.”

The company has already integrated an autorickshaw-pooling feature on its platform. It also recently announced the filing of a patent for offline booking of autorickshaws. In the absence of internet connectivity, “we’re providing users with the option to interact with our system through SMS or missed calls so that we are able to serve them,” says Agarwal, the company’s co-founder and chief technology officer.

“Being specialised in the autorickshaw space, Jugnoo has an edge over the others. However, it needs to keep innovating if it is to compete with deep pocketed, bigger companies,” adds Joshi of Unicorn India Ventures. According to company data, revenues for FY16 stood at Rs 16.46 crore, with a net loss of Rs 34.78 crore.

The fundamental question, however, continues to be around the growth prospects of the segment: Will companies be able to scale with autorickshaws? On the face of it, the players are optimistic. With many vehicles already on the roads, the largely unorganised segment seems ripe for the taking. But there are issues.

Uber’s and, to an extent, Ola’s reluctance to be in the auto segment stems from a possible cannibalisation of their taxi business. “Autos were originally considered the cheaper options to cabs,” says RedSeer’s Sharma, “but as cab hailing platforms have tried to incentivise their drivers and consumers, hailing a cab has become cheap, almost the same price as an auto.” That deters the big cab-hailing services from going all out in this segment. It also explains Jugnoo’s confidence about “focus” being its key differentiator.

The same price component that somewhat restricts Ola and Uber’s involvement in the autorickshaw-hailing space is also proving to be a potential disruptor for autorickshaws themselves, leading to strikes and frequent outbursts of anger by autorickshaw unions. But Singla believes this to be an opportunity for aggregators to come together to drive change. “Auto drivers are either for e-hailing or against it. I don’t understand why we (platforms) should have this animosity,” says Singla, arguing that in the face of significant legal and social hurdles ahead of them, the industry should try to work together. For now, though, Jugnoo, which began as an experiment at a college festival in the PEC University of Technology in Chandigarh, continues to soldier on in the shadow of two tech giants.

And despite Singla’s pleas for amity, the cut-throat competition looks set to continue. Sun Tzu’s The Art of War, then, may still come in handy.

Tweets by @forbes_india
The quest for the Amazon of healthcare
The big picture: Instagram is driving Facebook's future