You can sample heritage, trains, sea views and, definitely, a crab 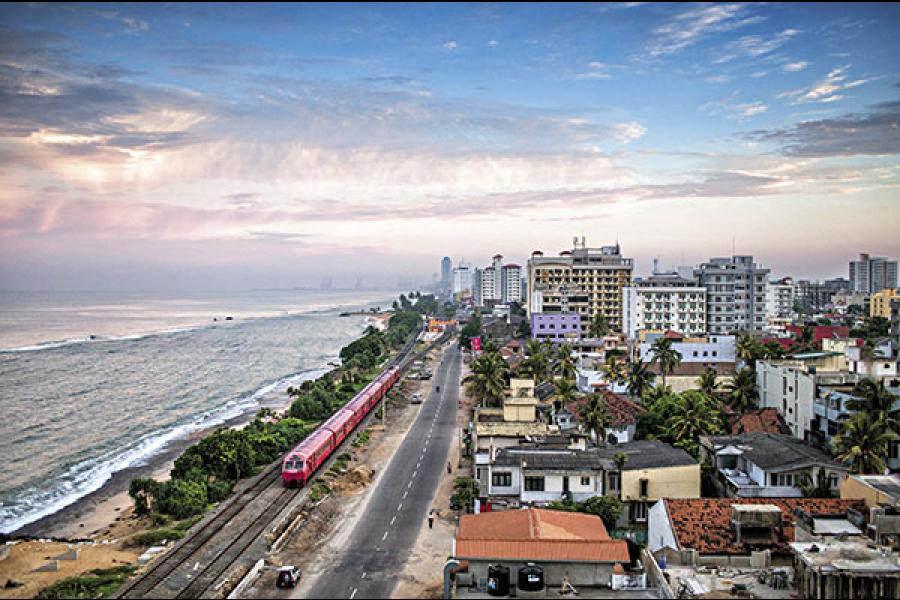 Image: Melih Cevdet Teksen
Colombo’s commuter trains that run along the waterfront will give you one of the best experiences of the city

Most holidayers to Sri Lanka barely spend a few hours in the capital before heading off to either the hills—Kandy and Nuwara Eliya—or the beaches in the south of the island—the likes of Bentota and Galle. Yet Colombo is in itself a worthy destination. With the end of the civil war in 2009, checkpoints are down to zero and the city of 5.8 million has its fair share of sights and sounds. Unlike in India, local travel is hassle-free and inexpensive. Everything, from buses to autos (called tuk tuks), is tourist-friendly. Still, even if you want to pack in a lot in a limited time, it’s best to put on a pair of walking shoes, grab a bottle of water and explore the city on foot.

In the AM
Start the day with a local breakfast of string hoppers: These are rice flour noodles served as discs and eaten with hand. Add a curry—it could be yellow dal and the coconut-based pol sambol—and you’ve got yourself a local start to the day. Top it off with steaming chai. Many restaurants near Colombo Fort Station or near the southern part of Galle Face Road will serve this. Or, to save time, request your hotel to rustle it up. Take a quick stroll around Pettah Market on your way to the next stop. (If you decide on the hills or the beach, train tickets can be bought in advance at Colombo Fort station.)

Post-breakfast
Head to the National Museum, Sri Lanka’s largest. Established in 1877 by Sir William Henry Gregory, an Irish writer-politician, it houses an extensive collection of Sri Lankan (mainly Sinhala) art and artefacts dating back a millennium. While the display leaves much to be desired, history buffs can get a taste of the country’s regalia as well as the throne and crown of the Kandyan monarchs who ruled the country from 1473 to 1815. The museum lawn is home to probably the largest peepul tree in South Asia spanning around 50 metres. Set an alarm to leave the museum in time for lunch. 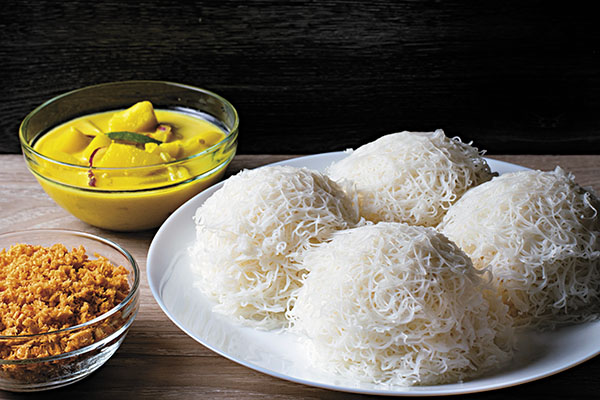 Café on the 5th
Located on 5th lane is the eponymous Café on the 5th. An open air dining place with eclectic cuisine, the place features everything from Sri Lankan kottu (shredded roti and vegetables or meat) and hoppers to noodles, burgers and rolls. The menu is rotating so there is always something new. Order a leisurely meal leaving just enough room for desserts that include English specialties like éclairs and pineapple cake. The Café scores highly among Colombo natives who come in large numbers for lunch before heading back to work. Post 2 pm, the place has a languid feel: Ideal to pace yourself over an ice tea before setting off towards Galle Road. 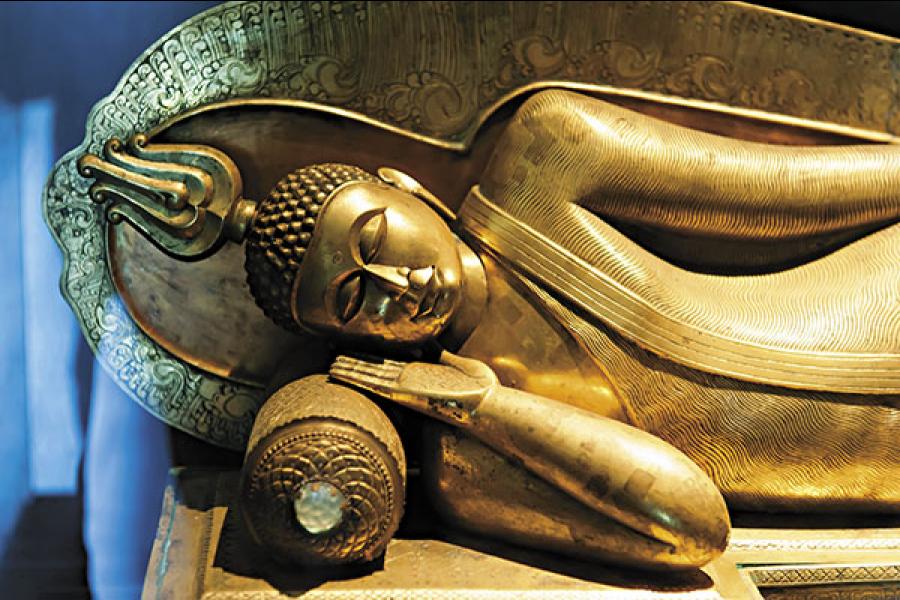 Image: Getty Images
The Reclining Buddha at the National Museum

Waterfront ride
The bylanes of Colombo are clean and well-kept, and the row houses deserve a second glance. Plan your afternoon here. The kirana shops there are similar to those in India. The best experience of the city awaits you in Colombo’s commuter trains that run along the waterfront. Nothing separates the track and the vastness of the Arabian Sea. As the train curves in behind Galle Face Road, one gets a clear view inside Galle Face Hotel— one of the oldest in Colombo comparable with the Taj of Apollo Bunder in Mumbai—with its wide pool and palatial rooms. Down the road is the more modern Taj Samudra. While some trains transport you back to the 1960s with their bright red coaches and no lights, there are modern Chinese-built metro coaches as well. Both run on the same track. I suggest you catch the train at Bambalapitiya station and ride it along the water to the Slave Island Railway station. It’s worth it. 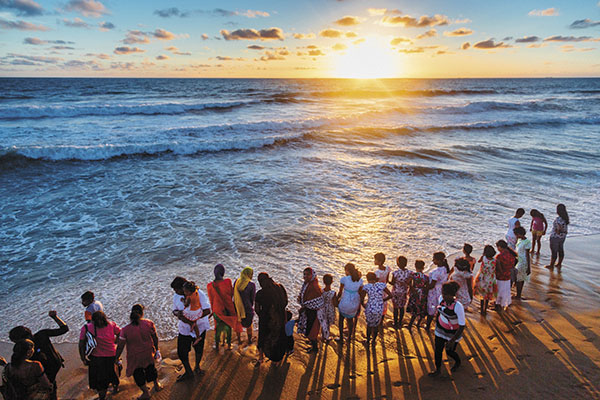 Galle Face
Colombo’s best known promenade is where families gather in the evening. Some people use the area for their evening run while tour groups take a quick look and are off to their next stop, which is a pity because Galle Face has so much to offer. Street-side stalls sell everything, from peanuts to kottu roti to fried crabs. Walk along the promenade and sample the offerings every 50 metres or so and stop for the sunset. And when you’re done, its time to head to what most people would describe as the highlight of their Colombo visit. 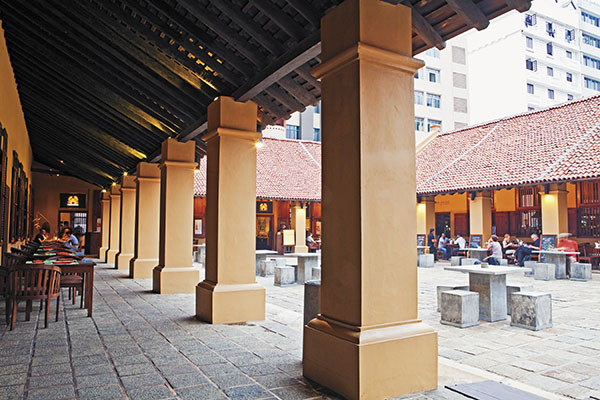 The Ministry of Crab
A short walk from Galle Face, in the precincts of the Dutch Hospital Shopping District, is the Ministry of Crab— the city’s best known restaurant. (The area also houses several bars where one can get a drink before heading for dinner.) Advertisements bombard you with its many pleasures the moment you land at the airport. Mention its name and the immediate reaction of a local is “you must go”. Book well in advance, even months if possible—email reservations are accepted. Once there, be prepared for the feast of a lifetime. Started by former cricketers Mahela Jayawardene and Kumar Sangakkara, along with chef Dharshan Munidasa, the restaurant serves fresh crabs in addition to other seafood and meat. Most patrons I noticed settled for crab cooked in one of their half dozen styles and a plate of bread or rice. Since the restaurant only serves crabs caught that day, they were some of the softest I had eaten. Their Tiger beer is chilled and the western rock music just right. It is the perfect note to end your Colombo visit, if 12 hours is all you have. 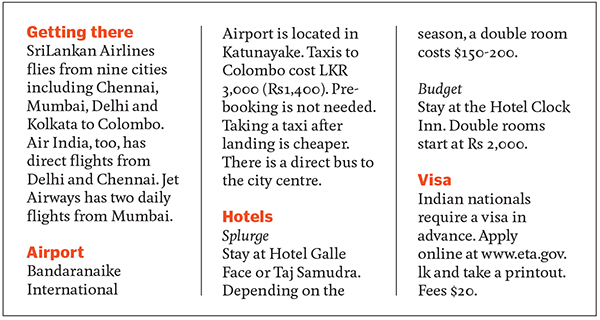 In this new series, we give you a tasting tour of some of the most exciting cities of the world