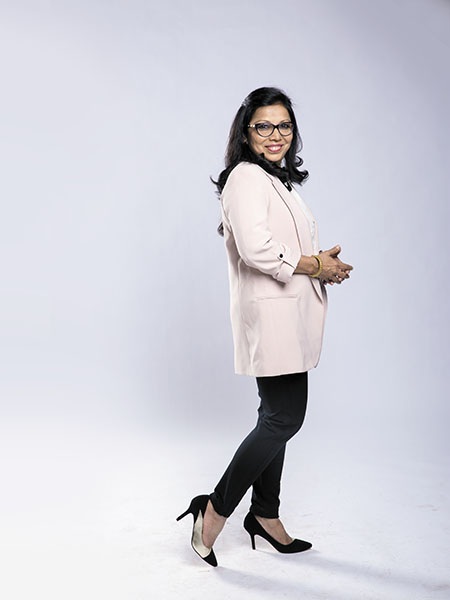 Instead of wallowing in self-pity, Revathi Roy picked up the pieces of her broken life and turned  her passion into a business
Image: Mexy Xavier

On one wall of Revathi Roy’s crowded cabin hangs an amateurish portrait of author JK Rowling. The words painted alongside—in block capitals—are telling: ‘Rock bottom became the solid foundation on which I rebuilt my life’.

“My son gifted this to me,” says Roy with a smile, adjusting her dark-rimmed glasses to read the quote aloud. “He told me, ‘This is exactly how your life has been’.”

Roy was a 45-year-old housewife with three young children when her husband slipped into a coma in 2004. After two years of anxiety and mounting medical bills, he succumbed to his illness. “I didn’t even have money to buy food,” she says matter-of-factly. But instead of wallowing in self-pity, Roy picked up the pieces of her broken life and started rebuilding.

As a rally-driving enthusiast—she participated and came second in the Lavasa Women’s Drive in 2010—Roy decided to turn her passion into a business. “I’m a teetotaller. I would anyway be the one dropping my friends home after a night out. So I thought, why not make a living out of it?” Promptly, she borrowed a tourist taxi from a friend and pleaded with GVK—the conglomerate that runs the Mumbai airport—to give her an official slot at one of the terminals. They agreed and, soon enough, Roy was ferrying passengers to and from the airport. The economics graduate then followed it up with an ad in a local newspaper, calling on other women drivers. Two others came on board and Roy incorporated her company as Forsche—a play on the car company Porsche, as well as a twist on the words ‘for she’—thereby pioneering Asia’s first women’s taxi service in 2007.

“We were three girls in three taxis. It was great fun,” reminisces  Roy with a broad smile. “We were the darlings of the media. They spoilt us with all the coverage.” The spotlight helped. Mumbai-based finance company IL&FS as well as the Japanese financial services group ORIX invested in Forsche, helping Roy scale up to 30 taxis. However, the arrangement turned sour, prompting Roy to exit in 2009. Today, the renamed ‘For-She’ has all but fizzled out. “You need real passion to run such businesses,” explains Roy, who used the money from her payout to set up Viira Cabs—the Mumbai-based taxi service with all-women drivers. Within a couple of years, Roy exited that business too. “Once a company runs on autopilot, there’s no point in sticking on,” she says. Moreover, while Viira Cabs continues to run, Roy points out that it was a “huge mistake” to buy cars and create an asset-heavy business model because in the long term, it’s difficult to sustain . 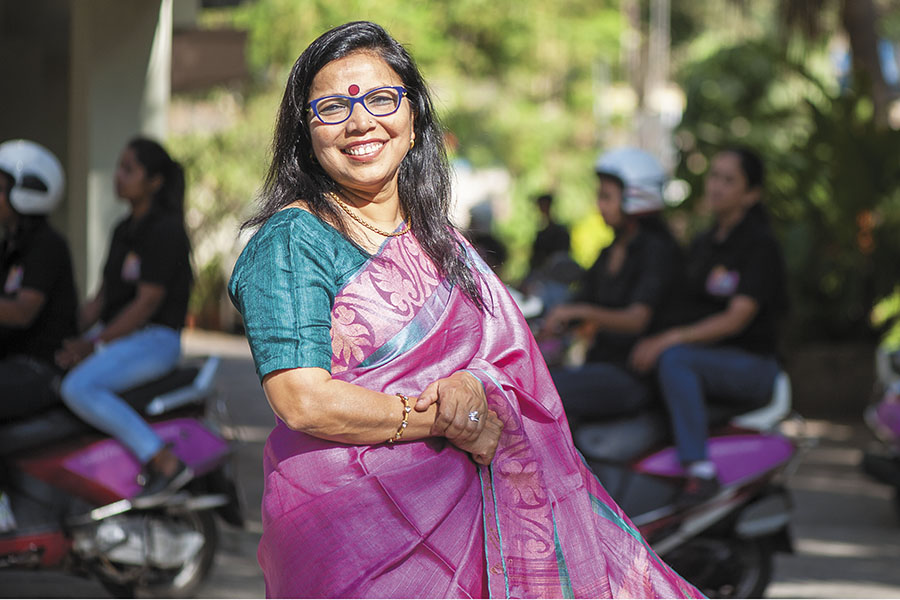 Today, at 57, Roy is CEO of India’s first all-female hyperlocal delivery startup Hey Deedee. Incorporated as Zaffiro Learning, she set it up a year ago along with financial investor Jagdish Gothi of Kamdhenu stores. Hey Deedee mobilises women from low-income communities, trains them to drive two-wheelers and has them undertake last-mile delivery for companies like Amazon, Pizza Hut, Subway and logistics provider Shadowfax among others. “The ecommerce sector in India is set to explode. Our entire business model is based on fulfilling their logistical needs,” Roy says. That’s not all. Her business hinges on the empowerment of women. “The ladies we train come from backgrounds where every day is a fight for survival. I want to empower them with a skill so that they can become financially independent and earn respect. If I could do it, so can they,” she says.

In between her conversation with Forbes India, Roy excuses herself to address a classroom full of black-uniformed Hey Deedee trainees. Assembled in an adjacent room, complete with desks and posters depicting road signs, the girls’ chatter drops to a whisper as their boss enters. “Good morning, ma’am!” they chirp in unison. But Roy means business. She gets to the point quickly: “Only wear the simple pearl earrings we have given you. Nothing long and dangly. And don’t gossip with customers when you go to deliver parcels,” she admonishes in Marathi. Some burst into a giggle while others listen on intently. After a 10-minute pep talk with the girls on professionalism and potential opportunities, including a tie-up with food-tech startup Scootsy, Roy hands over the floor to a female trainer before resuming the interview.

Hey Deedee’s business model is simple: After a 45-day training period, which includes classroom and on-road training, as well as training in basic English and personality development, the girls deliver parcels on behalf of companies like Amazon, who, in turn, pay Hey Deedee Rs 30 per delivery on average. The girls do about 10-12 deliveries a day, claims Roy. The service is currently available in Mumbai and Bengaluru with Nagpur on the anvil. Importantly, the business model is asset-light—unlike Roy’s Viira Cabs days. Apart from the two-wheelers used for training purposes, Hey Deedee doesn’t own a single vehicle.

Instead, Roy has tied-up with financial institutions to offer the girls loans at reasonable rates to purchase two-wheelers. “We do thorough background checks on the girls. The EMIs also are not a worry since the girls are on our payroll, earning Rs 10,000 a month,” she says. The lure of owning a vehicle keeps employee attrition—common in such businesses—low.

“I never thought I would own a vehicle,” says an excited Jyoti Thakur, who recently bought a Hero Honda Dio. “My life has changed because of Revathi ma’am,” adds the 38-year-old in Hindi. She was a housewife who would rely on odd cleaning and cooking jobs to make ends meet until she heard of Hey Deedee through her basti (locality) supervisor. She enrolled for the training programme eight months ago and now undertakes deliveries for Subway in the Prabhadevi and Worli areas of Mumbai.

“I can now send our 5-year-old daughter to a good school. Earlier with only my husband’s [a security guard] salary, it was not possible,” she says.

The 45-day training costs Hey Deedee Rs 10,000 per girl, of which the girls are required to pay Rs 1,500. The gap funding comes partly from the Maharashtra State Skill Development Society under the government’s Skill India initiative, and the remaining chunk from RPG Enterprises’ philanthropic arm, RPG Foundation. Within a year of operation, Hey Deedee has 68 women on the road and another 1,757 are under various stages of training. “It’s a scale business. That’s when we will make money per girl,” says Roy. Her aim is to train 15,000 girls to ride two-wheelers over the next two years. Recently, Hey Deedee also launched its own parcel delivery service.

“It’s not a unique business model. Last-mile delivery is being done by others too,” says Biocon Chairman Kiran Mazumdar-Shaw, who recently made a philanthropic investment in Hey Deedee. “But it is Revathi’s resolve and fighting spirit that struck me.” (Mazumdar-Shaw was part of the jury for this special issue.) Another investor, Manjari Kacker, former member of the Central Board of Direct Taxes, who now serves on the board of Indiabulls Housing Finance, echoes Shaw’s views. “She’s a fighter. And she is making a difference to the lives of so many girls, every day.”

After successfully shifting the gears of her life following a personal tragedy over a decade ago, Roy continues hard at work. This time, she says, it’s not about her. It’s about the girls.