The rise of OTT, the increased popularity of South and Hollywood films, and the growing disconnect with the masses are causes of concern if the Hindi film industry wants to survive this crisis

Prabhat Choudhary is founder of Spice PR and Entropy digital. 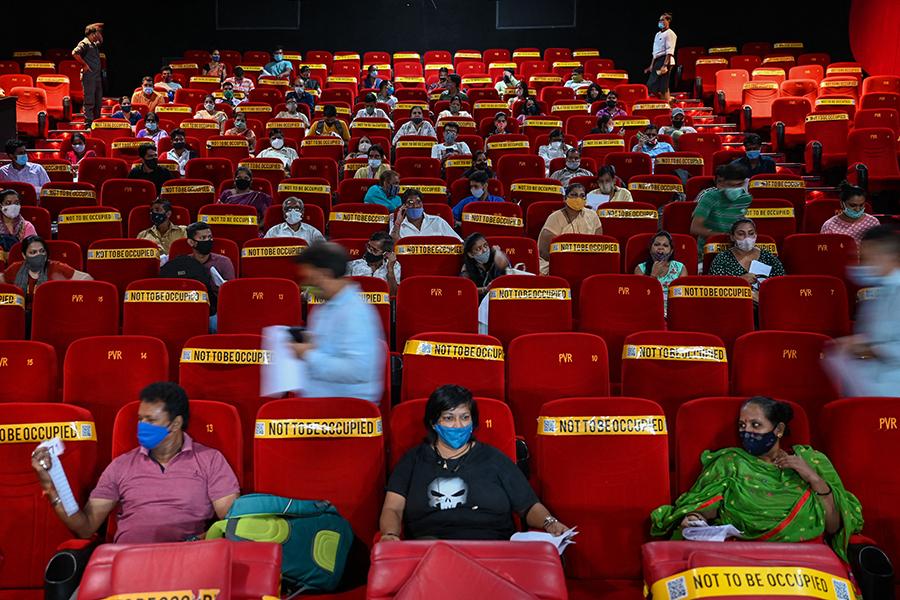 OTT has set the bar of content very high. It made audiences expect more from their viewing time. This syndrome has the power to make the content of films better; Image: Punit Paranjpe/ AFP

How has the pandemic impacted Bollywood and the entertainment industry in general? Will the entertainment business, specifically the theatrical film business, go back to how it was? Why are Spider-Man and some Southern films scoring high on the box office, whereas Hindi films are struggling? Is there a need for a collective course correction for Bollywood, and is there a need to reach out to and replenish our bases amongst the masses? These are questions that are being continuously discussed. One has been asked these in various forums as well as privately. I will try and build a narrative of answers to address them.

For Bollywood, the pandemic wasn't or isn’t a bad dream that it will just wake up from. Rather, it's been like a long tunnel that has brought us to a different landscape—one that bears some similarity with our earlier world but has seminally changed. It feels like we were or are inside a time travel machine and the film business didn't restart from where it had halted two years ago.

So what has changed? Why is the entertainment world not the same since the first lockdown in March 2020?

Those who say that introduction of one new medium never changes things for the existing media are, at best, telling us the half-truth. Imagine India of 1965 when Dev Anand's Guide first released. The only forms of mass media that existed apart from cinema were radio and newspapers. Now, imagine if that continued to be the case even today. While we would have had many more cinema screens to watch the same movie, and the film industry would be way bigger in terms of financial size, the avenues of consuming entertainment would have remained unchanged.

But television arrived, so did satellite TV channels, and the internet followed. Then came social media and now we have streaming services. Technology always brings changes to the way we live, and if it doesn't kill the old, it certainly changes it.

OTT has changed audiences remarkably and for the better. The pandemic lockdown acted as a massive catalyst to popularise the streaming platforms. What would have taken us ten years, has happened in the last two. Audiences have stumbled upon a Pandora's box of content. We are watching Spanish, Mexican, Korean, Israeli content—enjoying and celebrating it like never before. Our entertainment industry is competing with Money Heist, Squid Game, and Fauda, as also with homegrown shows such as Mirzapur, Paataal Lok, and The Family Man. Regional content from all over India is also a major participant in this renaissance of content. Bollywood did find a place to release its films on OTT platforms, but it very well knows that for Hindi cinema (or any other language) and its stars to survive long term, theatrical flourish is a must. It’s the magic of box office numbers that creates superstardom.

OTT has set the bar of content very high. It made our audiences expect more from their viewing time. This syndrome has the power to make the content of our films better. This will push the cinema content makers out of their comfort zone.

Rise of Hollywood and South India

To be honest, this is a pre-pandemic trend that has gotten more pronounced in the early days of the market reopening. Hollywood 'event' films like Spider-Man: No Way Home getting a massive opening across all the cinema markets and demographies in India, is an emphatic reminder of a trend that started showing with Marvel films like Avengers: Infinity War, Avengers: Endgame, and Disney's The Jungle Book.

Pushpa, a Telugu film dubbed in Hindi, starring an actor who has never done a Hindi film is likely to do more than Rs 50 crore net in Hindi markets. This is inexplicable even if you take the Baahubali syndrome into account. Allu Arjun seems to have had sleeper fan cells, deep in the Hindi heartland. What is it that makes the youth of the Hindi heartland who have grown on the staple diet of Bollywood go crazy over Prabhas, Allu Arjun, and junior NTR? Do they relate more with the content that the south is making?

While the pandemic lockdown period was almost infertile for business, except for OTT releases, social media was abuzz with conversations about Bollywood. Lack of accountability, entitlement, display of privilege on social media, while the common man was suffering, became a constant topic of conversations. The absence of Friday releases didn't help the disconnect that Bollywood was developing with the collective consciousness of our society. In fact, it hastened the process of alienation.

Cumulatively WE have a task on hand

Entertainment marketers are a small community and we must realise that our job is not just to sell but to connect. We need a road map. This industry, more than a hundred years old, continues to have a deep impact on the making of our pop culture. It has a lot of inherent strength too. Change is not necessarily a crisis until it’s made into one due to lack of acknowledgement or inflexibility. Each change brings with itself a set of opportunities. The challenge coming from OTT content can revolutionise cinema content in India.

The cohabitation of OTT and theatrical form of entertainment is perhaps the best news for the creative talent of our country as well as the audiences. Collaboration with the South industry can create a truly pan-Indian film industry. Bollywood stars and their choices continue to be consumed across various sectors and segments of consumers in India.

What needs to be done is acknowledgement of a changing environment and an urgent need to connect with the masses. Content that captures the imagination of Tier 2 and Tier 3 cities is what we desperately need, and we need young stars that can speak simultaneously to various Indian audience segments. The task is cut out for filmmakers and marketers like me.

The writer is founder of Spice PR and Entropy digital.

4,607
Thank you for your comment, we value your opinion and the time you took to write to us!

Tweets by @forbesindia
Prev
More Spielberg, less Tarantino: 2020 was the year of OTT and so will be 2021