Nishtha Satyam, deputy country representative for UN Women in India, talks about working with the government, private companies, financial institutions and other stakeholders to use gender-based approaches for inclusive impact 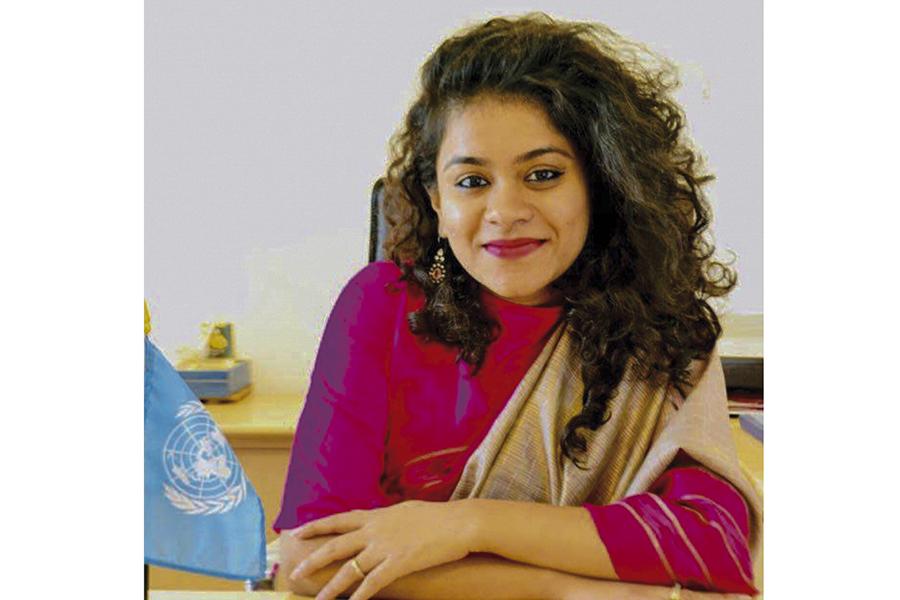 Multiple academic studies and research reports published in the wake of the Covid-19 outbreak have indicated that the pandemic has disproportionately impacted women compared to men. Take, for instance, a July 2020 analysis by McKinsey Global Institute, which states that existing gender inequalities exacerbate economic disadvantages for women. Using data and trends from unemployment surveys in India and the US, the study estimates that female job loss rates due to Covid-19 are about 1.8 times higher than male job loss rates globally, standing at 5.7 percent and 3.1 percent respectively. The study highlights that women make up 39 percent of global employment, but account for 54 percent of overall job losses.

A report titled ‘From Insights to Action: Gender Equality in the wake of Covid-19’, published in September by UN Women and the United Nations Development Programme (UNDP), indicates that about 70 percent of the world’s health care and social workers are women, which means that women are more likely to be first respondents and frontline health workers. However, a study published by the British Medical Journal on October 1, which analysed Covid-19 task forces and expert committees across 87 countries found that despite comprising over two-thirds of the global health workforce, “women hold only 25 percent of senior decision-making roles”. The study, titled ‘Symptoms of a broken system: The gender gaps in Covid-19 decision making’, highlights that there are just two women compared to 14 men in the task force constituted by India to fight the pandemic, which is just 14.3 percent.

“We have to make policy more participative. We cannot have policies for women without including women,” says Nishtha Satyam, deputy country representative for UN Women in India, who has been working on a spectrum of issues, ranging from socioeconomic empowerment to political representation of women. She talks to Forbes India about supporting women in entrepreneurship and improving their workforce participation, the need for a focussed governance plan to protect minorities and the marginalised, and why India has to adopt a gendered approach toward allocating funds and implementing policy measures ahead of the next Union Budget. Edited excerpts.

Q. More women than men might have lost jobs during the pandemic. What is the scale of impact on women’s labour force participation?By 2021, our estimate is that about 47 million girls [worldwide] will be pushed back into extreme multidimensional poverty. Analysis conducted after the Ebola outbreak indicated women took twice the time as men to take their workforce participation back to pre-epidemic levels. And 50 percent of women did not make it back to where they were in the professional space.

It is important to understand why this happens: First, the starting point for women is different from men. You’re looking at over 70 percent labour force participation for men and a corresponding 23 percent, and falling, participation for women. You’re looking at a gender pay gap of almost 30 to 70 percent depending on the industry. Not to mention how Covid-19 has especially hit sectors that employ more women than men, be it hospitality, textile, schools etc. Second, women are, especially in the unorganised sector, not the primary contract holders. Look at the construction industry, for example. You see women on construction sites doing a lot of hard manual work, but they do not have a direct work contract with the thekedar [contractor]. So it becomes easier to push them out compared to men. When the size of the table shrinks, it becomes more difficult for women to get a seat there.

Finally, when the world bounces back [after Covid-19] it will be more difficult for women to get back to where they were for multiple reasons, including the quantum of unpaid care work that has gone up as a result of the pandemic. This is why we [UN Women] urge governments to have a gender-based recovery and rehabilitation plan. Otherwise, we will just leave women behind.

Q. The pandemic also seems to have exacerbated issues like access to networks and capital for women entrepreneurs, along with other constraints that make business and revenue growth difficult. Are there solutions and interventions you are exploring?The pandemic has impacted mobility, making it difficult for the woman to reach out to the market. It has also impacted safety. In rural India, there is an additional problem of limited access to information, because there will be one mobile phone in the house that will be owned by the man in most cases. Women in business have lost access to working capital and opportunities.

We’re making a couple of efforts to address this. We’re working with the State Bank of India to restructure the existing loan scheme for women-led self-help groups (SHG) in order to give them working capital at a no-collateral basis for building their business. We are working with venture capitalists and angel investors to break stereotypes surrounding women entrepreneurs. At the government level, we’ve been working with [citizen engagement platform] MyGov on the Shree Shakti Challenge, where we call women entrepreneurs across the country to come up with innovative, tech-based ideas to counter the pandemic, which we mentor, coach and nurture. 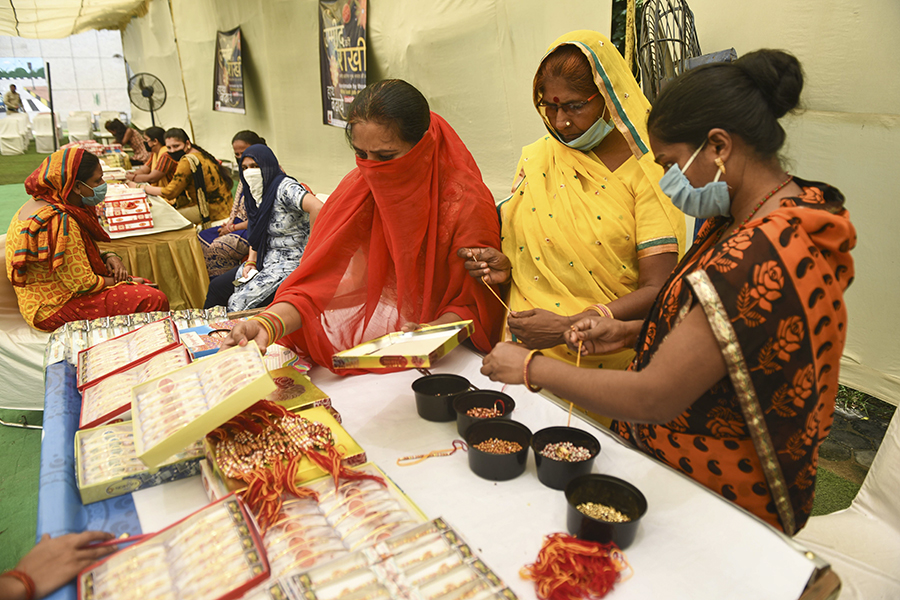 The demand-side also needs to be worked on, so we are also looking at big business groups that can procure more from women-owned-and-managed enterprises, thereby integrating them into the supply chain. We’ve had a fantastic start with [home appliances company] Voltas in Gujarat during the pandemic, where we are helping them set up their first women-managed factory. We’re trying to get the word out so as to enable more companies to encourage such initiatives. Take the case of the all-women pump manufacturing factory set up by the Kirloskar Brothers [in Coimbatore, Tamil Nadu], which is one of the most efficiently-managed factories across the world. Women there assemble a pump every 20 seconds! So we want companies to be open to such newer possibilities.

Q. The Code on Social Security passed by the government recently excludes various categories of workers, particularly ASHA and Anganwadi workers who have been working on the frontline during the pandemic. How can we ensure that women in the unorganised workforce are not sidelined?We have to make policy more participative. The fundamental point is that we cannot have policy for women without including women. The whole world lives in the ignorance of [not realising that] 70 percent of frontline workers are women, and that they are exponentially more exposed to the pandemic. They are the only cadre we have today and it is important to protect them.

Women from minority communities have been especially vulnerable during the pandemic. We have to centre stage them, reach the farthest first. If you are focusing on the women at the end of the line, you will have to go through the line to get there. That will take intentional focus of knowing who these women are, where they are, how their needs are differential, how do we include them in the programmatic response, and how do we bail them out. It is going to take us time to reach there so our intentions cannot be sporadic. It has to be a comprehensive, coordinated effort between different government ministries and other stakeholders. So the upcoming Union Budget is going to be an important tool to understand how we focus on the most vulnerable.

Q. India has been producing gender budgets since 2004-05, but year-on-year, we see that it has been a woefully underutilised policy provision. How can the government, this time around, be more innovative and responsible toward fiscal allocations for women?Gender-responsive budgeting is a conversation we’ve been having since 2004 but unfortunately, it has been underutilised. Again, when we look at gender-based budgets, allocations are just one part of it. We have to also look at implementation, monitoring, taxation, dialogue with multiple stakeholders etc. Those mechanisms are yet to be built. But we are seeing political and bureaucratic will. In my interactions with the finance ministry and the ministry of women and child development, I have understood that a gender-responsive budget is a personal mandate. The ministries have been consistently holding cross-stakeholder meetings on gender budget and methods to improve it. There are tools that have been launched to improve inter-state learning, and we are seeing a renewed interest at the state-level and also among frontline officers on the need to report in a gender-responsive way.

Q. Are we doing enough to collect and process gender disaggregated data?We still don’t have enough gender disaggregated data around which we can design interventions. And this is not just about India. Across the world, we do not have data on how 50 percent of the world consumes, behaves, reacts, responds… we still collect and process data on the understanding that the default responder is male.

Coming to India, do we have enough data to make the decisions we are making? No, we do not. Do I see that changing? Yes, I do. One example is the upcoming Census, which is the largest democratic data collecting exercise across the world. Having worked with the government on the Census, we find that the government is open to introducing newer methods and newer tools of collecting and building a gender disaggregated database. We’re also working with the private sector to invest in collecting gender disaggregated data, which will help them know their customers, vendors and employees a lot more.

6,345
Thank you for your comment, we value your opinion and the time you took to write to us!

Tweets by @forbesindia
Prev
Patriarchy rules politics too, but these women want to change that
Next
Women hold 17% of board positions in corporate India, but only 11% leadership roles