The ecommerce boom: A reality check

Till recently, the Indian ecommerce sector could do no wrong. New-age entrepreneurs with business ideas were being wooed by venture capitalists and private equity investors from abroad who wanted a share of this exciting new economy in the making in India. If Silicon Valley had spawned startups which are the toast of the world today, India was ready to witness its own boom in the e-economy. The result was a massive spurt in valuations—think Flipkart, Snapdeal and a host of smaller but significant ecommerce firms across various verticals. Online retail and allied services became the next big thing, and quite a few attracted staggering valuations which made the older, listed brick-and-mortar companies look jaded in comparison. 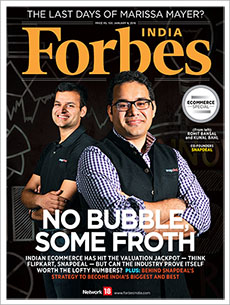 Cut to the present and, much like the debate currently raging across the world, the Indian startup and funding ecosystem is also wondering whether it is sitting on a ticking time-bomb of overvalued ecommerce companies which may show you massive growth, but have no profitability path in sight. Are the valuations, therefore, unreal? Are they creating a bubble waiting to burst? It is time to take a long, hard look at the sector and ask the uncomfortable questions.

It is against this background that our Ecommerce Special issue has been put together. Led by Editor (Enterprise) Deepti Chaudhary, Senior Assistant Editors Salil Panchal, Debojyoti Ghosh and Shutapa Paul and Assistant Editor Anshul Dhamija decided to deep-dive into the great ecommerce debate. Whether it is the niggling issue of a potential bubble, or examining interesting trends (like the emergence of app-only offerings and the online furniture space) or understanding the new Snapdeal strategy of spawning its own supporting ecosystem, Forbes India’s editors bring you a comprehensive look at the ecommerce space in India.

There are no clear answers yet. However, experts suggest there are pockets of overvaluation, and investors are moving away from merely investing in growth. Ecommerce firms are also recalibrating their strategies and ensuring that profitability, together with growth, is the new game in town. One thing is clear: Investors are asking companies to show them the money. As Ashish Shah, co-founder of online furniture firm Pepperfry, puts it: “One cannot say that today I will grow and tomorrow I will make money. Both growth and making money have to happen simultaneously.” And that will be the ecommerce mantra of tomorrow.