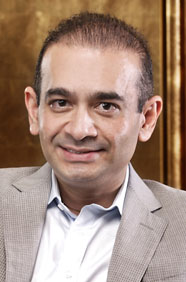 Diamond jewelry designer is reportedly mulling an IPO of his $1.8 billion (revenue) Firestar Diamond. Meantime, he's expanded the high street presence of his eponymous brand by adding 2 more boutiques, in London and Macau, bringing the total to 8. He's aiming for 30 boutiques in a dozen countries by 2020. Modi's ultrarich and celebrity clients include Hollywood actress Kate Winslet, who wore his jewels at the Oscar ceremony this year.
The diamantaire celebrated 5 years of his brand and his wife Ami's 40th birthday in March with a gala held in a Jodhpur palace hotel