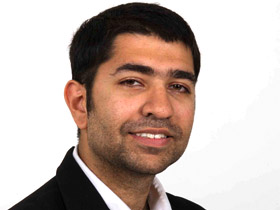 A quick look at Gautam Bhatia's work shows that he has the chops to be part of the team that is working on multiple challenges to the Aadhaar Act. The 2011 National Law School graduate studied at Oxford University on a Rhodes Scholarship. He then went to Yale University to study constitutional law, as he wanted "his legal education underpinned with a sound understanding of constitutional philosophy." (Bhatia believes the Indian Constitution is a transformative document and has written a book on the Freedom of Speech in the Indian Constitution.)

Back in India, his earliest legal training was in the trial courts where he assisted Advocate Jawahar Raja in Delhi. Bhatia worked on the bail petition of singers of the Kabir Kala Manch, a cultural organisation that campaigns against social inequality in 2015. From there, an introduction to Advocate Arvind Datar, who was working on the National Judicial Appointments Commission, made Bhatia apply his constitutional law learnings.

In August 2017, Bhatia saw himself thrust into the limelight as the second chair to Datar arguing for the Right to Privacy. The issue had emerged out of the multiple litigations challenging the Aadhaar Act, in which Bhatia had made his entry into the Supreme Court by working for Datar, challenging the linking of an individual Aadhaar number to the holder's PAN card. While the Supreme Court is still to decide on the validity of the Act, Bhatia has managed to carve a niche for himself. "Gautam's sound understanding of constitutional law has resulted in a lot of senior advocates relying on and respecting his research," says Nikhil Pahwa, founder and editor of Medianama, who has been associated with the legal challenges to the Aadhaar Act.