In just a few months, Kapil Sharma and his comedy show have become a must-see for audiences across all backgrounds 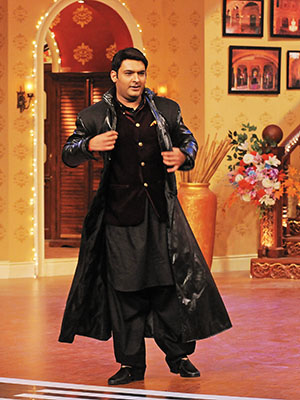 For a kid who grew up in the Amritsar police quarters, sang at school functions occasionally, and actively took part in plays during college youth festivals, becoming India’s biggest comedy show host wasn’t even a distant dream.

“For me, a successful career in comedy is nothing but happenstance,” says Sharma, 32, whose television show Comedy Nights with Kapil has become a mandatory pitstop for Bollywood celebrities keen on leveraging his popularity.

Sharma’s fatalism is understandable:  He was twice rejected at the nominations stage of Star One’s popular The Great Indian Laughter Challenge show (the channel has since been renamed Life OK).  But his persistence paid off, and he was third time lucky—he went on to win the show in 2007 and, today, the man who would be a singer is India’s most popular comedy show host.

When Forbes India met Sharma, he had just returned from a gruelling 12-hour shooting schedule; also, it had been barely 24 hours since he had landed in Mumbai after a week of live performances in Sydney and Muscat. A sprain in his back had impaired his movements; he walked slowly to the couch in his living room and tried to make himself comfortable.

His apartment in the western suburb of Andheri, bought in 2007, is a veritable bachelor pad. A treadmill takes centre stage in the living room, and a few of his friends from Amrtisar traipse in and out, preparing for a jam session at night. This is stardom in the classic television style—working odd hours and travelling for shows to far-off lands. Sharma, clearly, has arrived.

After his win at the Laughter Challenge in 2007, Sharma decided to move from Amritsar to Mumbai to try his hand at comedy shows on the small screen. His talent saw him continuously showcased on Sony Entertainment’s Comedy Circus; his ratings were soaring. But there was little room for complacence. The entrepreneur in him urged him to do his own show; that was when he wore his producer hat. His plan: To blend theatre and stand-up comedy.

A keen observer, Sharma had noticed at Ramleela events during Dussehra that a majority of the crowd would either be drunk or disinterested. "Now how do you entertain such a crowd?" says Sharma. "I decided to join the crowd and start talking to people. The moment they start to get the feeling that I am one of them, I can get them rolling.”

The show he conceived is based on BBC’s The Kumars at No. 42; it includes a gag, live audience and celebrity guests. Unlike the British show, here the audience would also play a role. “We wanted the audience to participate in our show and celebrities to be themselves, more casual than when they judge a dance or reality TV show,” says Sharma.

He kept the humour clean and chose subjects that would appeal to people from all backgrounds. Sharma wanted to be watched not only in the cities but in every part of India. And such has been his impact that the 10 pm slot, which he occupies, has become an extension of prime time.

“I wanted to put up a show that would interest both an Ambani and a rikshawala and that is the reason my show talks about the problems affecting a lot of people, such as inflation, milk and onion prices, etc,” he says. Sharma also believes that kids play a huge role in making stars out of performers, so it was important that the show also appeals to them. “Just like we remember Ramayana after so many years, I want the kids to remember my show for years to come,” he says. 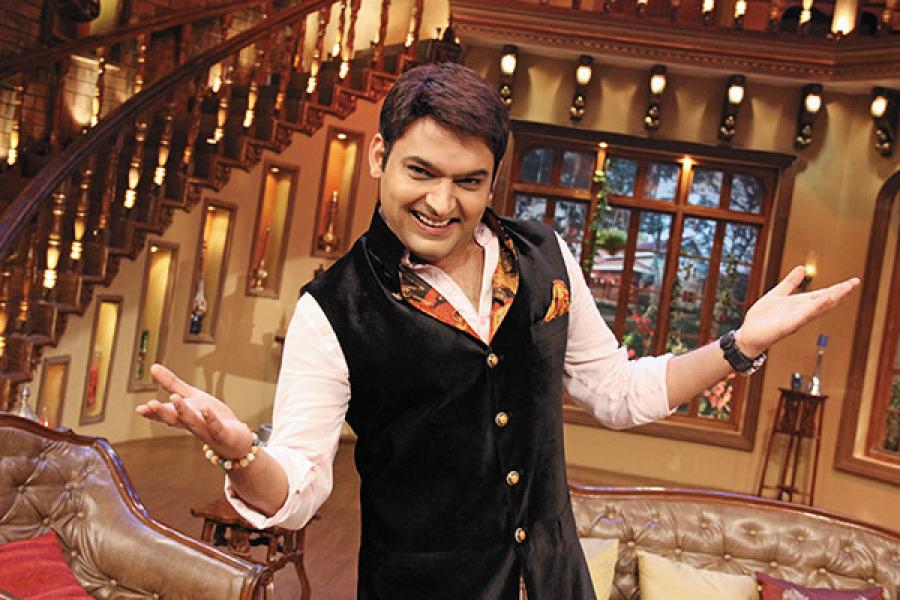 The show’s down-to-earth appeal is balanced by the star power it attracts. Sharma’s personal favourite is Dharmendra. Sharma had wanted him on the first episode of Comedy Nights with Kapil, but his team had said that the veteran actor was not available. So Sharma personally met Dharmendra and requested his support as it was his first show as a producer and host.

“Dharampaaji's film had already been released so he didn't need any promotion. Still, he agreed to come,” says Sharma.

The show launched in June and was an instant success. It is consistently No. 1 on TRPs in the non-fiction genre. In fact, Sharma is struggling to accommodate all the stars who want to attend his show. Shah Rukh Khan, Ranbir Kapoor, Deepika Padukone, Rohit Shetty, Saif Ali Khan and Kareena Kapoor are among those who have already shaken a leg and shared a laugh with Sharma.

Yet, Sharma is clear that the show is not going to become a vehicle to promote products or movies. Every act and aspect has only one objective: To make the audience laugh. To that end, he has even revised his own notions. His first thought was to have seven artistes wear similar costumes and discuss a single event. But he had seen the popularity of well-etched characters with the saas bahu soaps. He decided to introduce two strong characters; Gutthi and Dadi, his creations, are now considered to be the real crowd pullers.

The show has two writers who work on the skeleton script but all the punch lines are created by Sharma. Most of the script is finalised on the day of the show. He tries his best to keep himself abreast of current affairs but a significant part of his scripting is based on his observations. That is the reason why he spends time with the aam aadmi whenever he travels.

Sharma says he owes everything to the ten-odd years that he spent in theatre. He believes that his acting background has played a key role in his success. In fact, he would like to test his acting potential in Bollywood. He has been approached by many filmmakers but Sharma says that he wants to be careful in his choice of a role—and it may not necessarily be a comic one. He was recently approached by Anil Kapoor to play a terrorist in his popular television serial 24; Sharma had to refuse because the timing did not work out for them. But he is sure that he will get the time, the opportunity and even the role that he wants—he is prepared to wait.

Work keeps him too busy to watch any TV serials or movies. Sharma, however, is a huge fan of biopic films. Bhaag Milkha Bhaag and Paan Singh Tomar are two of his favourites.

We glance at the treadmill as we wrap up the interview and can’t resist asking, “Do you regularly use the treadmill?” Sharma, who can barely stand up, replies deadpan: “No ji. We just use it to dry our clothes.” And that’s our exclusive dose of comedy with Kapil for the evening.

Tweets by @forbesindia
Saina Nehwal: The Girl and the Game
Methodology: How We Crunch The Celeb 100 Numbers