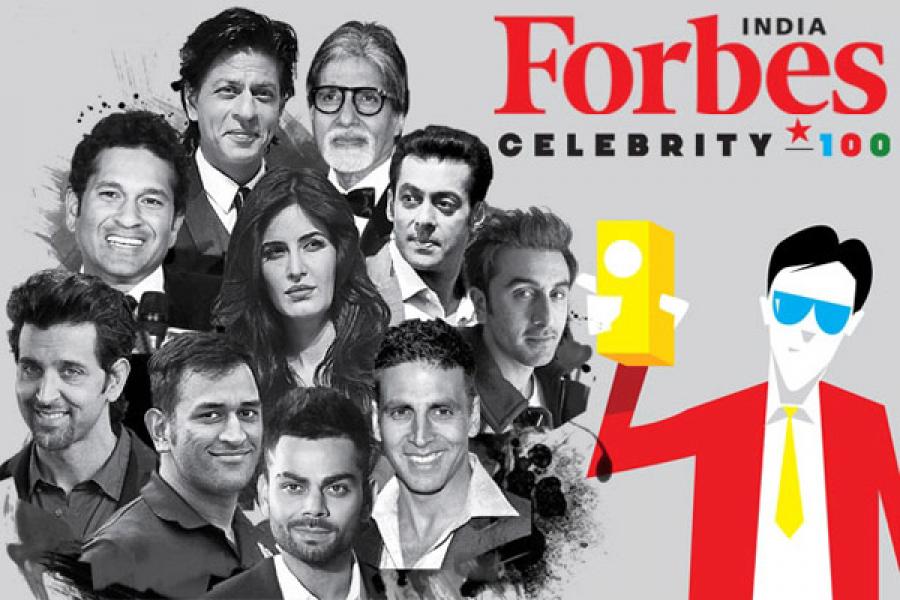 Shah Rukh Khan retained his No. 1 spot in the 2nd edition of Forbes India’s Celebrity 100 List, a ranking of India’s most powerful celebrities. Shah Rukh, the Baadshah of Bollywood, continues to be on the top on the back of his earnings, even though star cricketers scored above him on the fame rankings.

Mahendra Singh Dhoni (No. 2), with his immense popularity and endorsement deals, moved up from the third spot last year, switching ranks with actor Salman Khan (No. 3), who slipped to third place. They are followed by Sachin Tendulkar (No. 4), who moved up from No 6 and  Amitabh Bachchan (No. 5) who retained his position, completing the top five on the list.

Film actors -- all male, with the exception of Katrina Kaif (No. 9) -- dominate the Top Ten in 2013.  Cricketer Virat Kohli (No. 7), features on the cover (Virat Kohli, The Gladiator, pg. 86). At 25, Virat Kohli has already achieved more on the cricket ﬁeld than most do in their entire careers. He has also brought to the sport an aggression that promises to transform the team, and for the better. That attitude coupled with remarkable skill has made this man an unconventional role model and a marketer’s delight.

Cricket is the closest competitor to Bollywood and our fame index is testimony to that. The decision to put Virat Kohli on our cover this time was also motivated by the passion this sport continues to evoke in its fans. Kohli, incidentally, is the youngest celebrity to make it to the top 10 this year.

There have been two exits from the top 10 this time. Kareena Kapoor and Virendra Sehwag make way for Ranbir Kapoor and Hrithik Roshan. Sehwag does not just lose out on the fame count (a drop from 4 to 7), his earnings also fell; Kareena’s earnings eroded by Rs 17 crore, while her fame rank came down to 23 from 13 last year.

While the Forbes India Rich List focusses on net worth, the Celebrity 100 list is arrived at by measuring money (earnings estimates) and fame. The list includes movie actors, television stars, sportspersons, authors, ﬁlm directors, music directors, singers and stand-up comedians. Their gross pre-tax earnings are combined with their fame scores to arrive at the Forbes India Celebrity 100 List.

Nearly a fourth of the list in 2013 comprises newcomers. The notable ones include Ravindra Jadeja (28), Shikhar Dhawan (39), Shankar-Ehsaan-Loy (SEL) (52), Ranveer Singh (66), Prakash Jha (67). Navjot Singh Sidhu, the former cricketer who carved out a new career as a TV personality, also made it to the list this time, at No. 81. Kamal Haasan (47) didn’t make it to list the last year, but the controversy and success of his film Vishwaroopam ensured he was in. Sridevi, another star from Kamal Haasan’s era, also makes it to the list at 73rd spot. 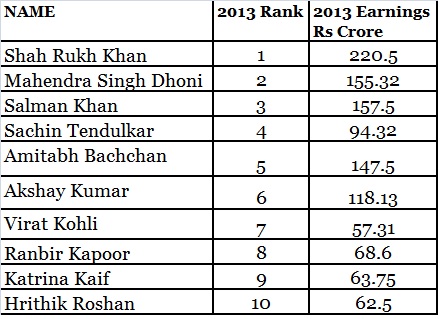 The Celebrity 100 measures money and fame, which includes estimated entertainment related earnings from October 1, 2012 to September 30, 2013, and how visible they are on print, television and internet (including social media).  Our principal data partners Exceed Entertainment, Galatta magazine, LexisNexis, IOS Sports and Entertainment, Percept Talent Management, and TAM-Eikona helped provide data for Celeb endorsements as well on print and TV exposure. We were also supported by indiantelevision.com, radioanmusic.com, tellychakkar.com, and Nielsen BookScan for data gathering process on select category of Celebs. The entire process was verified by Ernst & Young, our official tabulators.
The magazine priced Rs 125, will be available across the country on newsstands from 13 December 2013. For more details and coverage on entertainment business check our 2013 Celebrity 100 List

Show More
Get the latest stories, videos, and podcasts from Forbes India directly in your inbox every Saturday
Thank you for your comment, we value your opinion and the time you took to write to us!
Comments 49