Ayushmann Khurrana's earnings fall short of the List's price of entry this year. Yet, his unorthodox roles have earned him a distinctive identity in Bollywood 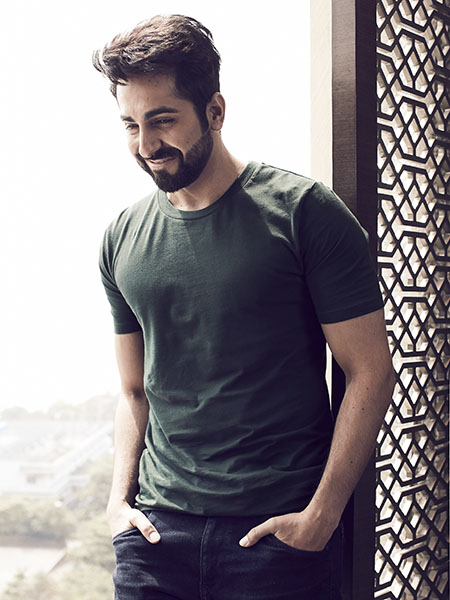 From his debut film Vicky Donor (2012), with its witty take on infertility and sperm donation, to Shubh Mangal Saavdhan (2017), which discusses the much-tabooed topic of erectile dysfunction, Ayushmann Khurrana’s penchant for unconventional roles has earned him a definitive identity in Bollywood.

The 33-year-old says he has no qualms about being part of films that explore beyond-the-pale subjects. “I think you need to be courageous and experimental with your craft.

Acting and film-making are about taking risks,” Khurrana tells Forbes India. “In this day and age, when there are lots of options on digital platforms to get edgy content, you have to deliver something different to pull people to the movie hall.” The actor, who had made it to the 2013 Forbes India Celebrity 100 List with net earnings of ₹2.58 crore, adds, “It’s fun playing taboo characters and subjects.”

His offbeat characters and a rocking debut with Vicky Donor notwithstanding, Khurrana could not make a mark at the box office with urban-centric romcoms like Bewakoofiyaan (2014) and Meri Pyaari Bindu (2017). However, his Dum Laga Ke Haisha (2015), with its message against body shaming, did not go unnoticed at the box office and among critics. He delivered two back-to-back hits Bareilly Ki Barfi and Shubh Mangal Saavdhan in 2017. Shubh Mangal Saavdhan, where his character suffers from a sexual disorder, is an antithesis to Vicky Donor where he portrays a sperm donor.

The actor admits that the films that have worked for him are the ones where he has either essayed a middle-class person or ones set in small towns. “If you’re changing yourself in every film, and for every character, you will get exhausted as an actor,” believes Khurrana. “You [an actor] need to establish yourself in a particular genre first before making a shift,” he says.

And 2018 will see him do just that. In his upcoming thriller Shoot the Piano Player, he plays a visually-challenged pianist. While it’s a new genre for him, Khurrana’s ambition is startlingly different. “I would love to do a film which would require me to go through a body transformation. [I’m] just waiting to show off my abs,” he laughs. [In Bewakoofiyaan he did get a chance to flaunt his abs, but only briefly.]

Khurrana, who says he wanted to be an actor from a young age—“I was always interested in theatre. In class five, I played Shylock in The Merchant of Venice”—also had a few pit stops along the way: The postgraduate in mass communications worked as a radio jockey and anchored reality shows on MTV, Star Plus and Colors before filmdom beckoned. Acting apart, Khurrana has also earned his stripes as a playback singer with one song each in six out of his eight films. “I would only sing if I’m required to… if it goes with the character and narrative of the film,” he asserts. The two films in which he hasn’t sung a song are Meri Pyaari Bindu and Dum Laga Ke Haisha. While in the former, his co-star Parineeti Chopra essayed a role which required her to sing, in the latter, Khurrana had played a character with a lot of complexities. “I thought I should separate the singer from the actor in that particular film.”

He also has his own two-year-old music band, Ayushmann Bhava (Sanskrit for ‘blessings for a long life’) that has performed live in the US and Dubai. “That’s my alternative [career],” says the actor.