Raam Reddy has turned a fusion of hobbies into his profession 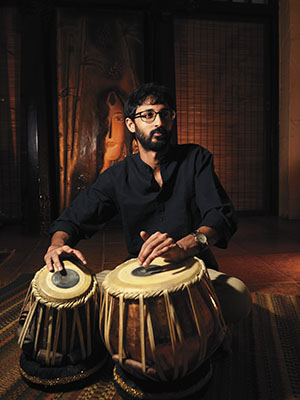 Image: Bmaximage
For tabla aficionado Raam Reddy, rhythm is one of the most important aspects of storytelling

When Bengaluru boy Raam Reddy was making his debut feature film, Thithi, his goal was to create something he believed in.

The result: The Kannada film became the first Indian movie in eight years to be screened at Switzerland’s prestigious Locarno International Film Festival in 2015; it won the Golden Leopard in the ‘Filmmakers of the Present’ category and the Swatch First Feature Award. Thithi also won the Grand Jury prize at the Mumbai film festival in 2015 and is slated for a theatrical release this summer.

Reddy, who made Thithi after completing a course in direction from Prague Film School in 2012, calls this an “incredible and unexpected” start. “The European audience, which is removed from our world, enjoyed the film, and that was rewarding for us,” he says.

Although Reddy tasted success with his eighth short film, Ika (2012), the turning point, he believes, was when eminent international producer Sunmin Park decided to back Thithi during her association with the Work-in-Progress Lab of NFDC’s Film Bazaar in 2014.

“While most filmmakers have a great passion, Reddy’s passion has clarity, which ensures that he is going to continue making better films,” says film-programmer Deepti DCunha, who sources and curates films for Indian and international film festivals, apart from NFDC’s Film Bazaar. “I never think of the audience because it stains the creative process,” he says. “It is no longer honest, from the heart, as you end up projecting an expectation.”

Last year’s 30U30 listee Chaitanya Tamhane, whose Court was India’s entry to the Academy Awards, says, “Thithi is not just a delightful film but also a massive social project. It’s nothing short of a miracle for a 26-year-old filmmaker to achieve this level of refinement and elegance. I feel fortunate to have a peer like Raam Reddy and I can’t wait to see what he will do next.”

Filmmaking, though, was incidental for Reddy, who dabbled with poetry-writing, basketball, tabla and wildlife photography in his school days. He also authored a novel, It’s Raining in Maya, at the age of 19, while pursuing a degree in economics in Delhi’s St Stephen’s College. It was only when he accompanied a college friend to a film set that he realised filmmaking was a fusion of all his hobbies: A fortuitous visit, for both him and cinema.