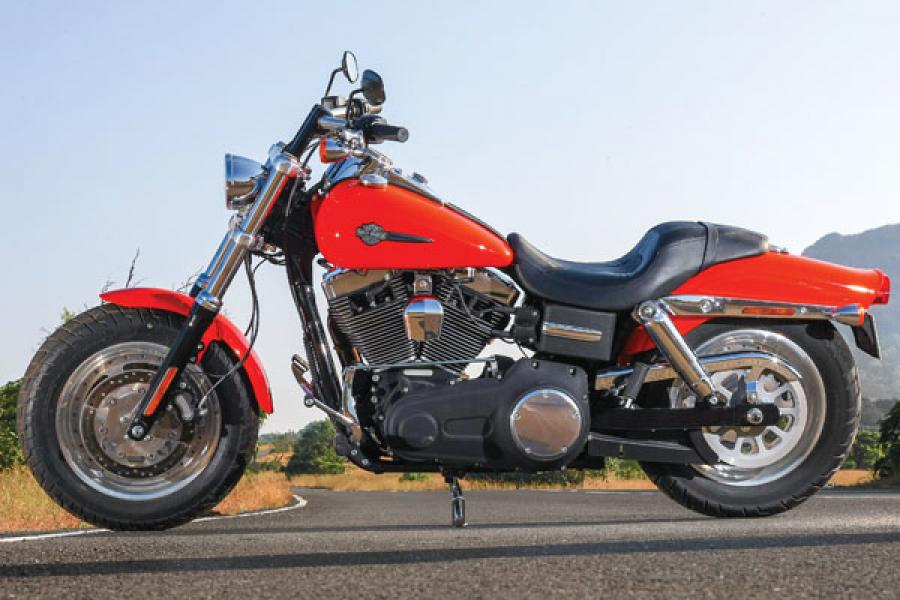 Is it a mix of the Fat Boy and Street Bob? That’s the immediate question that sprung to mind when I first heard about the Fat Bob. And, after seeing the motorcycle and riding it, I concluded that it actually is a mix. Not actually between the Street Bob and Fat Boy, but between cult choppers and drag bikes.

And it gets the ‘Fat’ tag from its massive front end, with a fat 130-section tyre and thick forks.

So, what’s the Fat Bob like? Typically American: It sits low, is quite big, and looks imposing. Our test bike was bright orange (it suddenly seems to be the preferred colour among nearly half a dozen motorcycles that have been launched in the past twelve months).

The distinct identity that the colour lends is enhanced by the dual headlights finished in chrome. Twin headlights were trending a decade ago, but do not look outdated even today, especially in chrome. There’s loads of chrome all around: The front forks, handlebar, instrument pod, airbox, engine, exhausts, and rear suspension.

The handlebar is flat, but sits on high risers, which makes it very comfortable. The tear-drop tank ends in a wide comfortable seat, which is a single piece including the pillion perch (which is a tad too small). This is surprising, since the tail piece continues well beyond the seat.
The clocks sit on the fuel tank like most other Harleys, and the dummy fuel cap on the left, which is actually the fuel gauge, is a nice touch.

The overall styling is tilted towards the classic look.

Sitting under the fuel tank is the familiar fuel-injected 1,690 cc V-twin (popularly known as the Twin Cam 103 engine). Peak torque produced is 135 Nm at 3,500 rpm. This engine is known for the loads of torque it offers even at low revs, and is mated to a six-speed gearbox with adequately spaced ratios, making it well suited for both city roads and highways.

The engine, when cranked up, is not as loud as several other Harleys; it hints towards the Night Rod’s sporty sound. Open the throttle in any gear, and there’s tractor-like torque on offer. There’s a sense of solidness to the engine peculiar to most Harleys. That’s how the Americans like it: Big, burly motorcycles with enough torque to uproot a tree stump.

The Fat Bob’s light front end is a bit of a surprise, but very welcome. This makes traffic riding a breeze despite its dimensions. The rear dampers are one of the most comfortable ones. In conjunction with the relaxed riding position, it makes it an ideal highway machine as well.