Reflections on parenting, life and death, and what it means to live in the eternal city 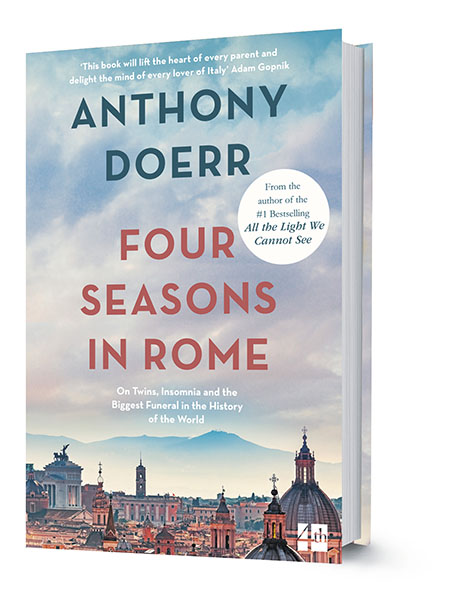 When Anthony Doerr landed in Rome, wife and toddler twins in tow, it was autumn. It was his first time in the city and he found himself having to put aside the book he was meant to write on his year-long fellowship because he was overwhelmed. As he writes in his book Four Seasons in Rome, “Every time I turn around here, I witness a miracle: Wisteria pours up walls, slices of sky show through the high arches of a bell tower; water leaks non-stop from the spouts of a half-sunken marble boat in the Piazza di Spagna. A church floor looks soft as flesh; the skin from a ball of mozzarella cheese tastes rich enough to change my life.” The gaze, he says, “widens and drifts; the eye is insatiable. The brain drowns”.

Considering they are new parents, their brains have been drowning in other ways, too. They struggle with sleepless nights and brands of milk, look for a babysitter, and as the “earth trundles along” and “autumn seeps away”, in early December, a friend tells them that if it snows, they must run to the Pantheon, because to see snowflakes come drifting down the hole at the top of the dome is to change your life forever.

Doerr’s life has changed for a year, but Rome is eternal. His mind, he says, caves in at the sight of the Pantheon, built around AD 125, even as he tries to get his head around statistics like the Pantheon’s vault, made of concrete, has a diameter of 143 feet, while the hole, the oculus, is 27 feet across. There are other things that occupy him. He wonders about how long it must have taken to make the around 220 plaster flowers, the size of patio tables, hanging from the underside of Michelangelo’s cornice of the Palazzo Farnese. And the many things Rome has to try to keep clean all across the city: “Fonts, flower petals, pediments, railings, hieroglyphics on obelisks, the furrowed robes of ten thousand solemn Madonnas, and the plump cheeks of a hundred thousand grinning cherubs”.

As he discovers Caravaggio’s masterful use of white and illumination boxes in churches, and marvels at dawn in February, like “a series of folding petals blooming outward”, you make your way through Rome with him into spring when “colour flies into the eye” and it is as if an “illumination box has been mounted above the city and finally somebody has plunked a coin into the slot”.

His descriptions of nature and food are a pleasure to read, so that you pause and savour the words, while his reflections on parenting, and on life and death, make you ponder. As summer approaches, Doerr realises the impermanence of their time in Italy, and, leaving the kids with the babysitter, he and his wife take off for Umbria every Wednesday to explore, walk around, and eat food that is often “a poem”: Blown campanella with local sheep’s milk cheese, topped with Parmesan and black truffle fondue… the loin of a Valnerina piglet in a pecorino, pear and Montefalco red-wine sauce; and a hot, wet chocolate flan smothered with orange cream.

Doerr’s is not a guidebook to Rome, it’s a rumination, a familiarising and a revisiting, a glimpse of what it might be like to live there. Roma, they say, non basta una vita, one life is not enough, but living through four seasons is a start.

Tweets by @forbesindia
This $ 52-million startup spotted a bright opportunity in LED lighting
Aditi Kothari Desai: Like father, like daughter