A book on Cricket and Discontents

Cricket historian Gideon Haigh’s book is a collection of essays that chronicles the travails of the cricket world in the second half of the past decade. He trains his guns on the Board of Control for Cricket in India (BCCI), the International Cricket Council (ICC), the Indian Premier League (IPL), Allen Stanford, Lalit Modi and spot fixing, as he tries to makes sense of the cacophony surrounding ‘The Gentleman’s Game’.

Haigh primarily focusses on India, the economic epicentre of cricket, and the BCCI as he analyses the way the game is administered. A book on administration is rarely so compelling. His insights into the backbiting, arm-twisting cronyism and shady practices within cricket boards across the world as they bend over to accommodate the BCCI connect many dots. 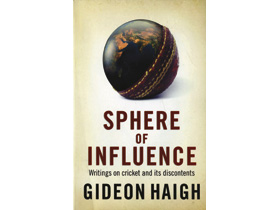 One such example is the IPL scandal that blew up in everyone’s faces last year, beginning with the controversy around the Kochi and Pune teams. Modi found himself in the dock, with Sharad Pawar, his mentor, expected to bail him out. But N. Srinivasan, former treasurer and current president of the BCCI, and Shashank Manohar, outgoing president, the two most powerful men in cricket weren’t having any of it. They wanted Modi out. The Times of India published a startling revelation that City Corporation, a company associated with Pawar, had made an unsuccessful bid for the Pune franchise. They were warning Pawar that he couldn’t defend Modi anymore. A BCCI source told Kolkata’s Telegraph newspaper that Modi could afford to be so blatant because of an arrangement with Pawar.

The book is filled with anecdotes like these. When Haigh writes about the maladies in the game, and a Westerner’s reactions to India, he is spot on. His works on spot-fixing are a must read for anyone who goes beyond reading the day’s scores in the papers. After reading the book you feel cricket has a dismal future in board rooms and no one is in a hurry to try and change it.

Haigh, however, falters when it comes to the fourth part of the book, Asian Giants. There is only so much you can write on Kapil Dev, Sachin Tendulkar and Muthiah Muralitharan and we’ve heard, read, and seen it all. That is possibly the book’s only flaw.

Tweets by @forbesindia
Running on Empty: Milk, Beer and Petrol
How The Rupee Runs