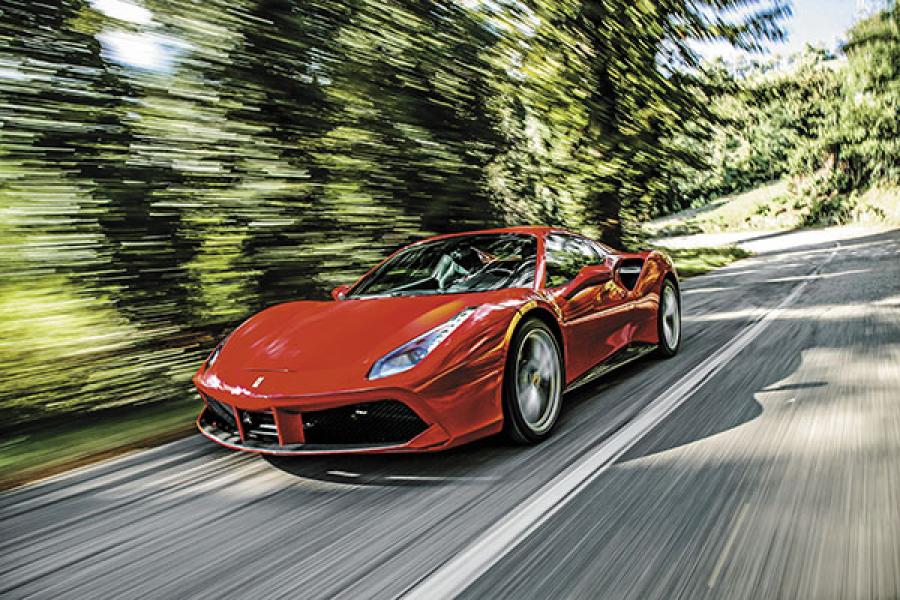 The 488 Spider has come a long way—from the 308 GTS’s targa top to the 348 Spider’s soft top to the 458’s retractable hard top, which has been carried forward on the 488 Spider. Ferrari has been aggressive with the 488’s design, so that the flair and elegance of the 458’s design has made way for more angles and scoops.

Gone is the 488 GTB Coupe’s elegantly sloping glass rear window, with its view of the V8 beneath; it has been replaced by a flat deck area surrounded by flying buttresses. The 488’s aerodynamics is unprecedented, and the drag coefficient of 1.53 is a record for a Ferrari convertible.

The only obvious change in the interiors is the turbo boost gauge on the instrument cluster.

The biggest transformation in the 488 is the V8 engine, which has been downscaled from 4.5 litres to 3.9 litres. So there’s a marginally smaller bore and stroke, but the air that enters the cylinders is now forced with the help of two turbochargers. The effect, obviously, is more power (100 horses of it) and more torque (40 percent more of it).

With the 488’s V8, Ferrari is wiping out all the fallacies associated with turbocharged engines, including the perceived shortfall in sound. Sure, the 488’s force-fed V8 doesn’t rev all the way up to 9,000 rpm, so the frequency of the sound is lower, but is it a sound you are going to feel shortchanged with? Only if you’re obstinate or deaf.

The 488 can be a handful if you’re not gentle with the throttle and correct with steering angles.

The vehicle gets the second generation of the Side Slip Control (SSC). The SSC2 not only works in tandem with the evolved versions of electronic driving aides such as the ESP9 and F1-Trac, but it also controls the active dampers. But perhaps the more important detail is that it will help you carve silly slides without ending up in the gravel traps. 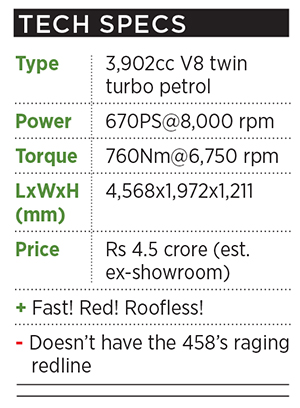 The 488’s brakes borrow bits from the top-of-the-range LaFerrari, which means they are lighter and also have better stopping power.

The hard top retracts in all of 14 seconds, and it does so even on the move, at speeds of up to 45 kmph.

The rear window pulls up in three stages, cutting out the wind buffeting so you can have conversations even at 200 kmph.

As with most convertibles, the 488’s chassis had to be reinforced to make sure it doesn’t flex. So, the 488 Spider is 23 percent stiffer than the 458 Spider, and 50 kg heavier than the 488 GTB Coupe. But this hardly affects performance.

Ferrari claims that 0-100 kmph times between the coupe and convertible are identical at exactly 3 seconds, while zero to 200 kmph takes 0.4 seconds more, at 8.7 seconds.