'The beast' is a real monster, and it loves wheelies 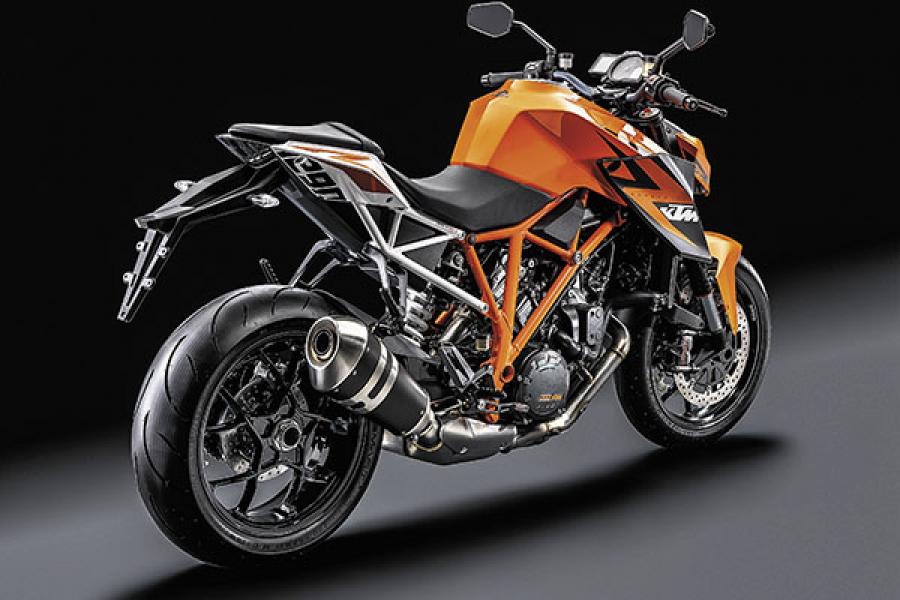 They call it “the beast” and it certainly looks the part. And then you hear the numbers: 180+ PS, 195 kg and 2.6 seconds (claimed) to 100 kmph. It doesn’t help when veteran MotoGP rider Jeremy McWilliams adds, at the end of the product presentation, that the biggest problem he has with racing is keeping the front wheel down in practically every gear.

In designing the replacement for the 990 Super Duke, KTM engineers have taken things to an all new extreme. The street-going 1290 Super Duke, with its 1,301 cc engine, makes 177 PS of power and 144 Nm of torque; it’s also packed with technology: A slipper clutch, ride modes, multi-level traction control, anti-wheelie control and ABS that can be switched off.

Having just hopped off a 390 Duke that I rode on the way to the track, the 1290 immediately feels like a much larger motorcycle. You also sit inside the bike rather than on it, but there is a comfortable reach to the flat bars over the large fuel tank and the foot pegs allow for a very comfortable riding position. 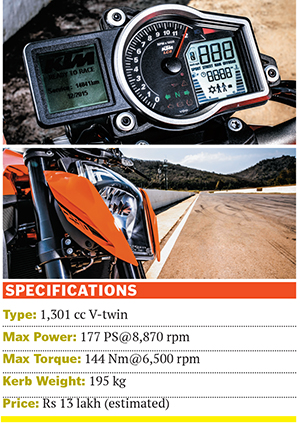 With the first proper prod on the throttle, “the beast” immediately lets you know that there is some serious horsepower and torque on tap. For a large motorcycle, it turns very quickly. The suspension is firm, but over a bad, bumpy surface, it was forgiving as well. But the biggest impression you’re left with is how brilliant that torque-laden motor is. In any gear, at any speed, you just open the throttle and it literally takes off, front wheel skimming the surface of the track, anti-wheelie software working overtime.

The first session was over before I knew it and then it was time for the race-prepped version. As I pulled out of the pits and got on the gas, I inadvertently pulled a small, unexpected power wheelie. Damn! It’s feisty. The throttle response is even quicker on account of the Akrapovič race system and requires an even more precise right wrist. It’s a lot louder too and the thundering boom of that V-twin with the stock exhaust is replaced with a snarl from the free flowing pipes.

With the grip on offer from the slicks, I never came near the limit of traction, so I never felt the electronics cut in. That is, apart from the anti-wheelie. It’s a beast for what it can do: It’s blindingly fast with traction control on, and just doesn’t want to stay on two wheels with it turned off.

The street bike is also brilliantly easy to ride and you are always in control of how exciting (or scary) you want your ride to be. KTM is mulling which motorcycle to bring to India in the future as its flagship model for the subcontinent and I’m desperately hoping it picks this absolute monster of a motorcycle.

Tweets by @forbesindia
Real estate bill will help weed out bad apples
Fashion's hottest company... is based in Maine