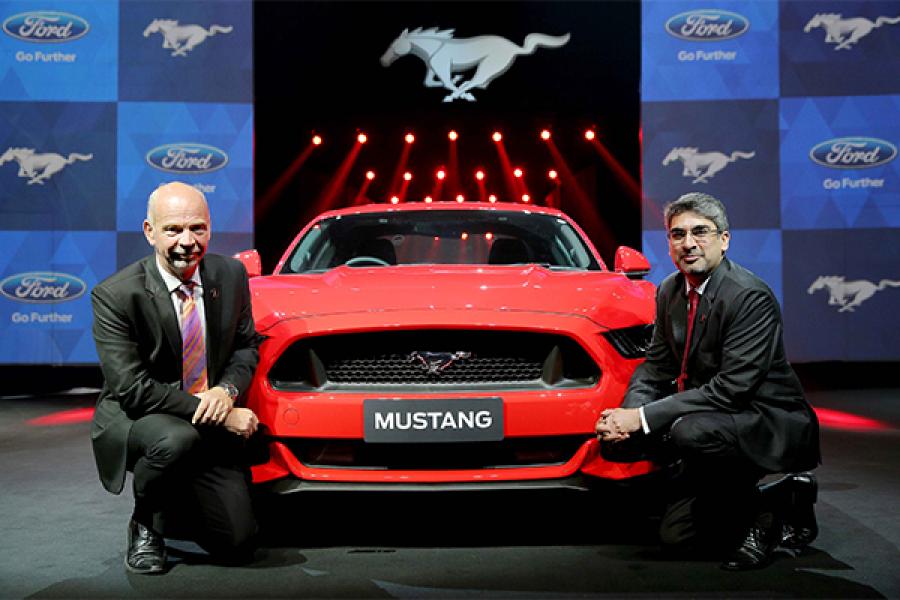 American automaker Ford unveiled its muscle car, Ford Mustang GT on Thursday in New Delhi at a pre-Auto Expo event. An official launch will follow in the second quarter of 2016, said company officials. The car will be on display at the upcoming Auto Expo from February 3-9, 2016.

“Throughout its long history, the Ford Mustang has been a symbol of optimism and confidence for people all over the world,” said Nigel Harris, president, Ford India. “The new Mustang is a modern interpretation of the American icon, and we are thrilled to be giving our customers in India the opportunity to experience this piece of automotive history for the first time.” The latest Ford Mustang will be brought to India through the completely built up (CBU) route.

Compared to its global counterpart with multiple engine choice, the Indian version of the Mustang comes with a 5.0-litre V8 gasoline engine that gives a competitive whopping 435 bhp and 542 Nm. In India, it will have only a 6-speed dual-clutch automatic gearbox unlike the global model that comes with a 6-speed manual gearbox.

“The new Ford Mustang is a one-of-a-kind vehicle and is going to appeal to Indian drivers who value the style, performance, and heritage that the Mustang name brings,” said Harris. “With advanced new technology, an iconic design, and world-class power, it truly sets a new standard.”

The first Mustang was sold way back in 1964 and since then the automaker has sold over 9 million cars and is currently in its sixth generation. The Mustang has assumed cult status since its introduction and made a significant dent in popular culture.