It's roomier and loaded with features like Kinetic Seats and Active Brake Assist. And gets a near perfect score on the way it drives too 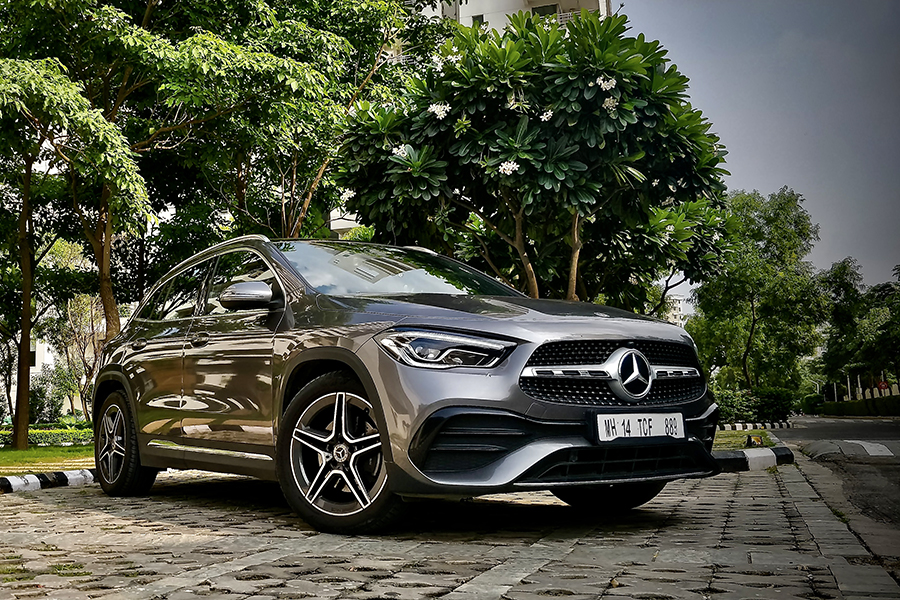 The new GLA is sleek, muscular in certain places, and easy on the eyes.

Transformations are hard, to put it mildly. Especially in the world of automobile design. How do you arrest your audience’s attention? How do you put up with the intensity of the scrutiny it’s going to attract, regardless of the design direction you go with? The good news is that, for Mercedes-Benz, redesigning the GLA was required more than forced. The old one simply aged rather quickly.

But this… hats off, Mercedes. It’s always easier to say this in hindsight, but this is how you should have designed the GLA in the first place. Gone is the low-slung look, and gone, too, are the decidedly awkward angles you can catch it at. The new GLA is now so grown up, and so much better looking at the same time. It doesn’t feel or look half-baked in the least, and for the amount of money it’s commanding, it needed to be. The one that’s on show here is the AMG Line trim, which always helps spruce things up a fair amount when it comes to visual drama. The massive 19-inch wheels are a case in point, and they suit the overall look of the GLA to a T.

Have a quick peep inside and you start to really get into the groove of what Mercedes is going for here. Swathes of black are interrupted by a generous helping of brushed silver that lends an immediate air of premiumness to the entire cabin. An uninterrupted screen goes from the centre of the dashboard all the way to the edge of the steering’s right corner. If it weren’t for a closer look, you could very well be fooled into thinking that it’s one giant screen instead of two sizeable screens with a near-invisible partition in the middle. The screen in front of the steering is, of course, the one that houses the instruments, while the one to the left of it is of a touch variety that navigates all the functions of the car—media, navigation, colour themes, phone connectivity… the works. Directly under the centre touchscreen are three very radical-looking vents, below which are your HVAC controls, and that’s… it. The simplicity and modernity of it all is what strikes you immediately, and that’s the way it should be. You pay a premium to de-clutter your life and make it easier to deal with, and the GLA understands and complies with that. 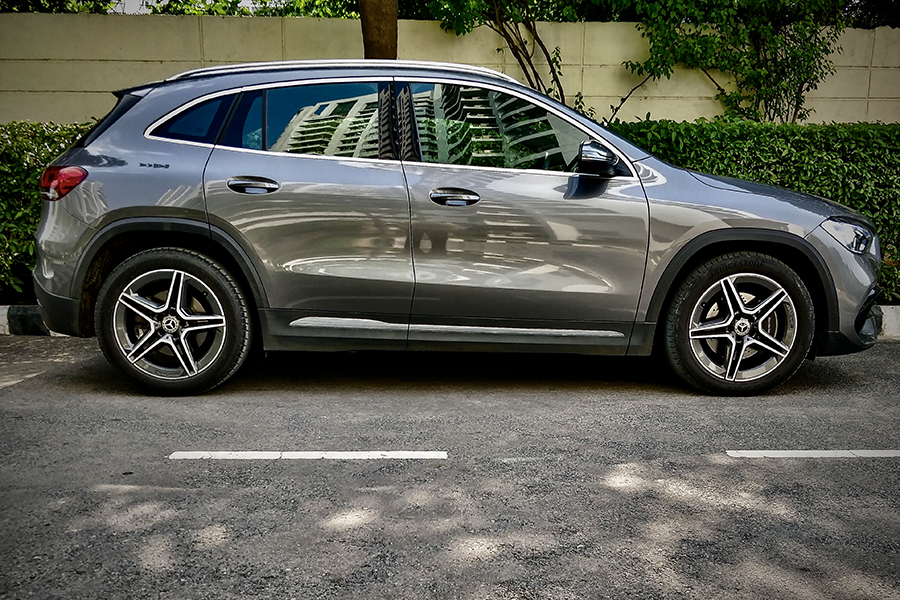 It may look compact, but the insides will surprise you.
Luxury, of course, doesn’t entail just that. Where the new GLA scores massively over the old is in the space on offer. It’s kind of a given considering the longer wheelbase, the wider track and the taller roof, but it’s still quite pleasing to see the actual amount of room inside the GLA. Legroom at the back? More than you’d need, honestly, and definitely a hefty amount more than the previous GLA. Headroom, too, is commendable, especially once compared to the old GLA that had more of a coupe-like design theme going on. This one mimics an SUV much more effectively in that regard.

There are even two sunroofs to help the more claustrophobic of you out during longer drives and, of course, a pair of vents to help circulate some air at the back. There really is very little cause for complaint in the new GLA, and this writer is genuinely happy to see that. Sure, the boot space could have been better, but that’s only because the space-saver hogs a considerable amount of space. Without it, you have a very acceptable 435 litres on offer. Think a few airport bags and a week’s worth of groceries, and you’d be set. Still need more space? Drop the rear seats and you should be satiated. 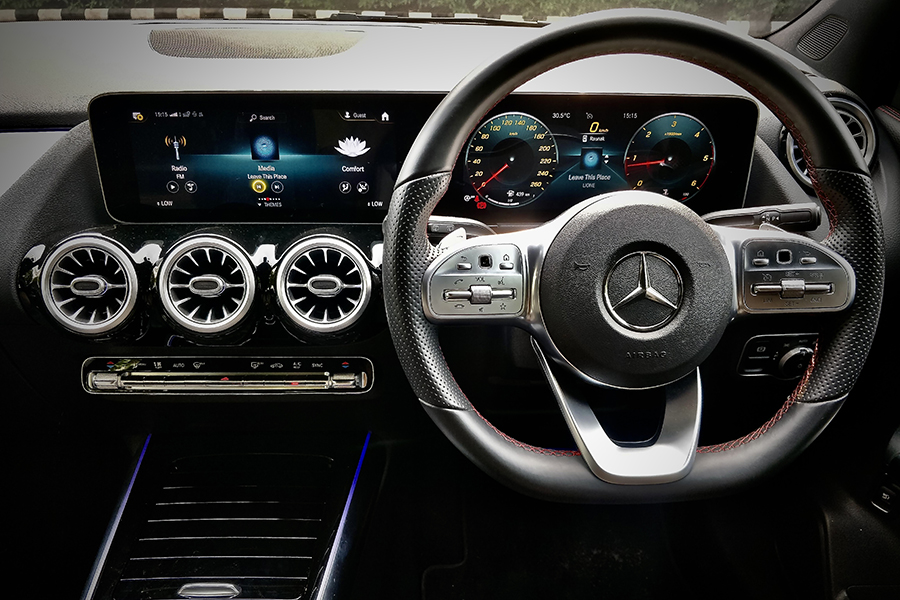 Minimalist and premium, the GLA's cabin is a delight.
It’s not short on features, either. The seats get a very useful ‘Kinetic Seats’ function that essentially gives you tiny prods every so often in an attempt to get you more comfortable while on the move. Sure, it’s not a full-blown massage you’re getting, but it’s still quite thoughtful. Other cool bits include being able to customise the colour of the LED mood lighting strips that run around the cabin, being able to remote start your car so you can pre-cool the cabin, having Alexa and Google voice commands to help guide you, and, my personal favourite, the Active Brake Assist system that automatically slows the car down if it senses that an object or vehicle in front of you is coming too close for comfort.

But perhaps the best bit about the new GLA is the way Mercedes has built it. Be it in the way the materials have been put together, or the general quality of plastics and metal used throughout the car, and even the satisfying way the doors shut with a hefty feel, it all reeks of a car that’s seemingly built tough and built to last. It’s always nice to see that. Especially in cars that are of this calibre. 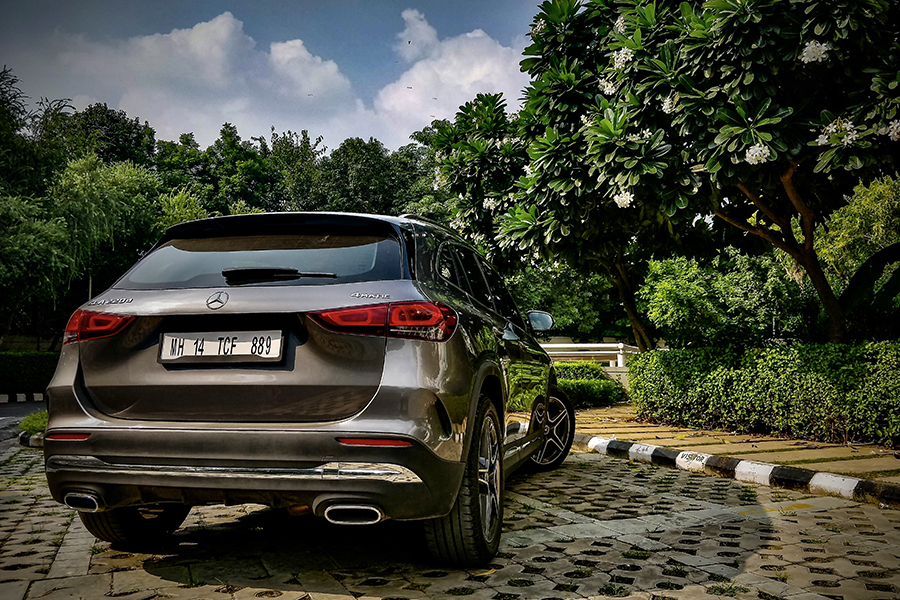 Tail-lamps mimic the other Benz SUVs, but that's no bad thing.

Then, of course, there’s the way it drives, and I’d give it a near perfect score here. There’s a very good reason for that missing mark, but I’ll get to that in just a minute. For a start, some numbers: 190hp and 400Nm from a relatively humble 2.0-litre turbo-diesel engine. Were you expecting more? Well, I was. But here’s the thing: I was wrong. It doesn’t need it. It’s been tuned to perfection. There’s a strong flow of torque from very low down in the rev range, so you always have enough on tap to execute a quick overtake if required, and the 8-speed twin-clutch auto should be a poster boy for how gearboxes should behave. It’s quick, smooth, efficient and highly enjoyable when you switch over the paddle shifters behind the steering wheel in Sport mode. There’s a strong surge of power from 2000rpm all the way to around 4500 revs, which might seem like a small band to operate in, but shift up a gear and the surge continues, almost seamlessly at that. Quick car, indeed. 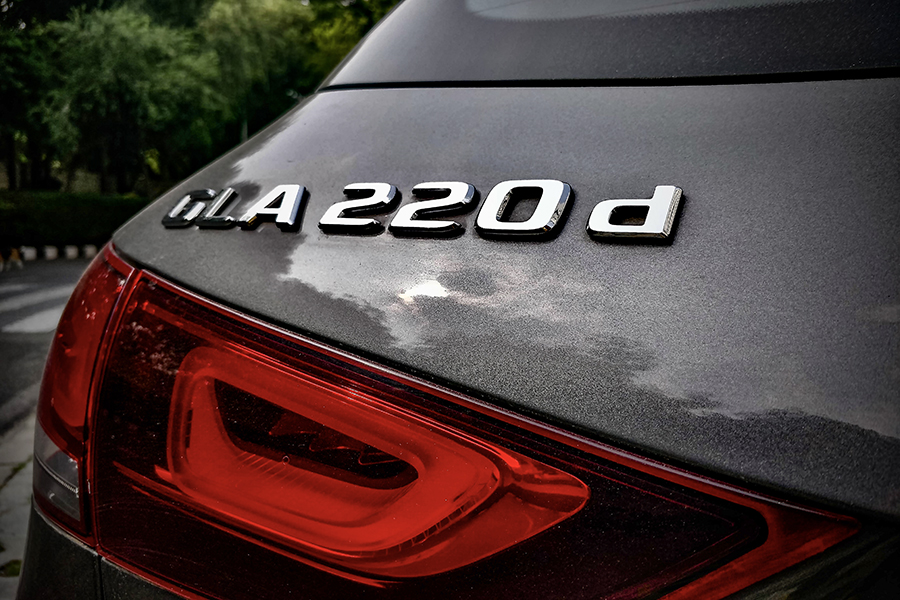 That's Mercedes-speak for, 'Oozes torque.'
It even rides over our pothole-ridden roads with inordinate ease. It shouldn’t, ideally. I really thought it wouldn’t once I saw the 19-inch wheels, but Mercedes has pulled it off, somehow. Even around corners, when you think your inner Indycar wannabe is out to play, the steering doesn’t play spoilsport. There’s just so much feel and liveliness that comes across that it begs you to push harder and, well, simply put, just enjoy yourself.

The only trouble is that while you’re doing that, the liveliness of the engine could end up dampening the mood, somewhat. And by that I mean, it gets loud. The turbodiesel makes a fair racket when pushed, and it filters into the cabin quite a bit, so I wouldn’t deem this to be the most relaxing cruiser. This is the only place I’d mark it down.

All said and done, though, that’s but a minor glitch in what is otherwise a genuinely complete car. I keep coming back to it, but this is just so far off the previous GLA. It’s night and day, honestly. And that’s just what it needed to be taken seriously again. After a good few days with it, I couldn’t have taken it more seriously, which is also, in my books at least, a bit of an issue. But… Mercedes is one step ahead already. There’s also an AMG spec. The GLA 35, I believe they call it. Now that’s what I call covering all bases.

Tweets by @forbesindia
In Australia, it's 'long live king coal'
Startup Fridays Ep 26: 'Building deep tech in India is like growing rice in a desert: You need perseverance' - Parag Naik