Across the country, builders are pulling out all stops for their luxury home developments even though it is a market that is taking off slowly and fraught with challenges 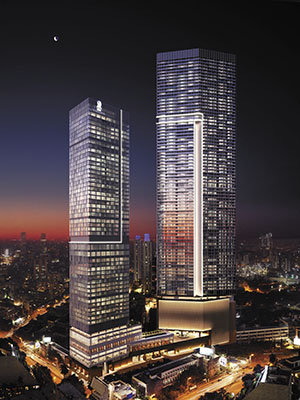 Luxury homes make a bold promise: They’ll turn your lifestyle upside down. Neighbours will envy you for a lifestyle they can only aspire to. Your address becomes your calling card. And, most importantly, like any true luxury product it can be passed on to the next generation.

Developer Vidyut Saraf has a simple definition of luxury. “It is what people don’t know they want,” says the deputy managing director of Kolkata-based Forum Group.

And, at Three Sixty West, a luxury housing project in Mumbai’s midtown Worli, Vikas Oberoi is going all out to do just that. The epiphany struck after he had finished work on the design, and construction had already begun. Oberoi had the best architects (Kohn Pedersen Fox) and designers (Tonychi & Associates) and the apartments would be serviced by Ritz-Carlton; but other luxury developments in Mumbai had similar offerings. The project lacked an edge—that something extra that would help Oberoi Realty push sales. He then chose an unconventional addition to differentiate Three Sixty West. He decided to bet big on sports.

While all luxury projects come with sports facilities, Oberoi decided to go one step further. He engaged Populous, a firm that specialises in designing sports facilities and convention centres. Among their claims to fame are the Emirates and Wembley stadiums in London. Populous would ensure that residents have access to not just the finest facilities but top-class cricket and tennis coaches. Among the sports that will be taught are kickboxing and badminton, Oberoi says. “When you design your house you don’t let go of an idea just because it has come to you late,” says the chairman and managing director of Oberoi Realty. The project is expected to be complete by 2017.

Across India, luxury homes have become the holy grail for developers who want to rise above the pack. They aim to have one showcase project—a trophy project—that can really stand out and help distinguish them from the rest. More than that, they can potentially bring in the money: For instance, in Mumbai, these apartments can sell for as much as Rs 40-50 crore each.

Ask Lodha, the country’s largest real estate developer by revenue, which is building Lodha Altamount on Altamount Road in Mumbai, in place of the three-storey Washington House which the Lodha Group bought from the US government for Rs 342 crore in 2012. Three years later, Abhishek Lodha, managing director of Lodha, has launched the Luxury Collection, a brand that will develop Lodha’s luxury residences in Mumbai and London. For the Altamount Road building, its signature luxury project, Abhishek Lodha says it will pay an “inordinate attention to detail and service”. This property will be managed by St Amand, a bespoke concierge service (owned by Lodha) that will provide five-star levels of comfort for residents.

In New Delhi, Tata Housing plans to develop four luxury villas at Hailey Road in the heart of Delhi; these could sell for Rs 150 crore each. These signature villas will come with private pools, landscaped gardens and terraces, patios, private elevators, jacuzzis and sun decks.

Ashwinder Singh, chief executive of residential services of JLL India, points to branded residences as a new trend. These are often by invitation only and are serviced by the likes of Four Seasons, Ritz-Carlton and St Amand. What’s interesting is that both Lodha and Tata Housing also have affordable housing projects. Why then would they want to develop luxury residences—something that requires a very different skill? Sales of these apartments can take months to close while the marketing campaigns have to be very subtle. Mass advertising in the case of luxury homes tends to put off buyers. While they refuse to admit it, insiders (people working with these developers as well as their publicists) say that every developer wants to have at least one project that he can boast about. Just like the residences become the calling card for people staying in them, so have they become for the developers.

Of course, it all boils down to the sale.

So who are the buyers for these residences? Sotheby’s Wealth-X reports that the average Mumbai buyer is 56 years old and has a median net worth of $55 million (or around Rs 350 crore). Forty-six percent of buyers are self-made and unlike in London and Singapore, where most of the buyers work in banking and finance, in Mumbai most are either from business families or highly-paid professionals. While most buyers are self-made, those Indian luxury buyers who have inherited their wealth prefer real estate as an investment class.

“And those who buy them want to live in them. Not too many properties are bought with the intention of leasing them out,” says Amit Goyal, CEO of Sotheby’s Realty, North India, who is currently handling all-India operations.

Sotheby’s set up its first India office in November 2014 and says the market growth has been slow due to the drying up of liquidity. Sellers don’t want to sell as prices have fallen while buyers are still on the sidelines as the homes may be available for less in a year from now. For instance, farmhouses in the outskirts of Delhi that can sell upwards of Rs 50 crore are already available at 25 percent less.

And while it waits for the market to pick up, Sotheby’s has seen traction among non-resident Indians. Most want a second home in India and have been persuaded to buy due to the weaker rupee and lower prices. Sotheby’s regularly conducts events in London, Dubai, Australia, South Africa and Hong Kong where NRIs are invited to preview homes from its catalogue. While the brand name helps, it is also the transparency that Sotheby’s offers that has set new standards in the Indian market— title deeds are checked and lawyers arranged to do a due diligence on the property. “Prospective buyers have very little time and everything must be arranged before hand. They want zero surprises,” says Goyal. On average, a deal in the luxury space takes three months to close.

Even after deals are struck, developers realise that keeping buyers happy is of paramount importance. They could influence other buyers, it is believed. Vidyut Saraf, who is constructing an 80-apartment luxury development named Atmosphere in Kolkata, focuses on just that. The developer hired a box for the Indian Premier League matches in Kolkata where buyers could bring their guests. The Forum Group also owns an Inox theatre, which is housed in its mall in south Kolkata. Last row seats for major releases are reserved for buyers in the luxury development. He sees this as a relationship-building exercise where the developer has to go the extra mile.

Vikas Oberoi meets all buyers at Three Sixty West personally before they sign on the dotted line. “It is more like a final meeting to reassure them. By now the price has been set and only one out of ten buyers would back out at this stage,” says Oberoi.

The manner in which developers have gone about conceiving their projects—the wide panoramic views, the high ceilings, the concierge services—all show that luxury real estate at a par with developments in London and New York have arrived in our cities. The first of these apartments will be delivered post 2017 and buyers will be able to judge developers on their promises. Will the standards match up to London, New York and Dubai’s? It’s hard to say at this stage despite what the developers promise. Perhaps that’s also one reason why a large number of buyers are holding back. Amit Bhosle, managing director of ABIL which makes luxury homes in Pune, talks about a distinct slowdown in sales. “Earlier, buyers would buy during the lifecycle of a project. Now they buy only during launch and when it is close to completion. They want to see they are getting what they paid for,” he says.

As a result, all the developers Forbes India spoke to for this story reported anaemic sales. People associated with the projects mentioned admitted that they have not even sold half the inventory for projects that are slated to be completed in the next 18 months. Importantly, they haven’t been able to raise prices and must continue to pay interest on bank loans while buyers hold on to their purse strings. In the end, they may create the finest homes in India, indeed even those that can be passed on to the next generation with pride, but they would do it at a huge cost to their profitability. Perhaps, that’s the reason why no one has announced more luxury projects in the last year, and are focusing on completing those already planned or under way.

This calling card isn’t one you can get printed at your local press, clearly.

Tweets by @forbes_india
United Spirits Limited reports Rs 929 crore profit in Q2 of FY16
'For successful deals, PEs and promoters must be on the same page'