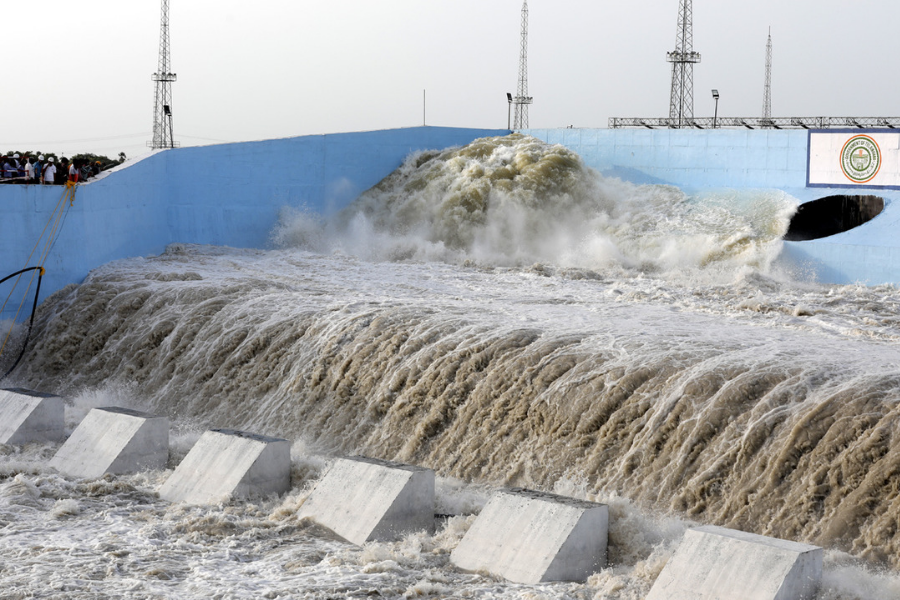 Hyderabad, India, August 12, 2019: Highlights: Megha Engineering and Infrastructures Limited (MEIL) has made yet another glorious achievement in the Kaleshwaram Lift Irrigation Project (KLIP). MEIL successfully commenced operations in the world's largest Laxmipur Underground Pumping Station (LUPS - the Package 8). The pump house has been named after the goddess Gayatri, successfully completed the wet run executed by switching on the 5th machine in LUPS on the night of 11th August. With this, around 3000 cusecs of water rose to over 111 meters and flew into Mid-Manair through the gravity canal. Telangana CM Mr K. Chandrashekar Rao is expected to inaugurate the Pumping Station on 14th August. MEIL has successfully changed the direction of Godavari River from downstream to the upstream stretch of the water contrary to the natural flow of water. The Pranahitha - Godavari river water will flow back to reach the LUPS from Medigadda via Annaram and Sundilla. A landmark in the global lift irrigation sector, the Laxmipur Underground Pumping Station Gayatri of Kaleshwaram Lift Irrigation Project has been completed in just 3 years. The KLIP has yet another engineering marvel in its name, the world’s largest underground pumping station, constructed 470 feet below the Earth’s surface. The LUPS would enable storage in several reservoirs through the year in the river belt. “KLIP is the world’s most innovative mega project in the industry. There is an underground pumphouse, 470 ft below the ground with twin tunnels and the largest surge pools in the world. This is an ultra-mega project in the world, having 7 motors, each having a capacity of 139 MW. These motors can lift 3 TMC of water per day. This accomplishment is ‘Make In India’ as the Motors are Indian-made and are based on Computational Fluid Dynamics (CFD) technology. All the electrical infrastructure has been constructed with 3057 MWs capacity, comprising of six 400KV and 220KV substations, transformers and 260 km of transmission lines, 7 KMs of 400 KV XLPE under Ground Cable. Other key features include the twin tunnels of length 4133 mt and diameter 10 mt, world’s biggest surge pools and the extraordinary size of the Pump House.” said Mr B Srinivas Reddy, Director, MEIL, speaking about the array of achievements. Lift Irrigation projects are usually constructed at ground level. However, This LUPS has been built underground with a pumping capacity of 2 TMCs of water per day. 21.6 Lakh CuM of soil has been excavated from 470 ft below Earth’s surface for lifting an enormous amount of underground water by pumps and motors. A 160 KVA capacity pump transformer has been set up to run the motors with 139MW of power. The project consists of four surge pools for storage ensuring uninterrupted water pumping. Further, the turbine pumps have been erected at a depth of 138 mt under the ground. Each motor pump weighs around 2,376 metric tonnes, which gives them the name ‘Mega Motors’. Megha Engineering Infrastructure Limited (MEIL) with 30 years of its rich technical expertise in such complex and high-end electro-mechanical works has been executing this project as a mission with an objective to deliver water to the farmlands in time and quench the thirst of Telangana.  “We feel honoured to be part of Telangana’s dream project and the world’s biggest lift irrigation project, the KLIP. It has been a privilege and a lifetime opportunity to execute with world-class technology by coordinating with the world’s best engineering suppliers and realizing the dreams of Telangana. CM Mr K Chandrashekar Rao’s supervision and determination pushed our team to complete the project in time.” said Mr Reddy, on being asked about the record-setting pumping station. To know about the World’s biggest pumphouse in detail, visit The Fact Sheet Of KLIP Source: Digpu
Disclaimer: This content is distributed by Digpu. No Forbes India journalist is involved in the creation of this content.

Tweets by @forbes_india
India in the 1980s: The lull that shaped the storm
Profitability improves for banks, but deeper concerns remain