A new TV channel in Tamil Nadu is eroding the clout of Sun News, Kalaignar News and Jaya Plus by staying non-partisan and focussing on real issues 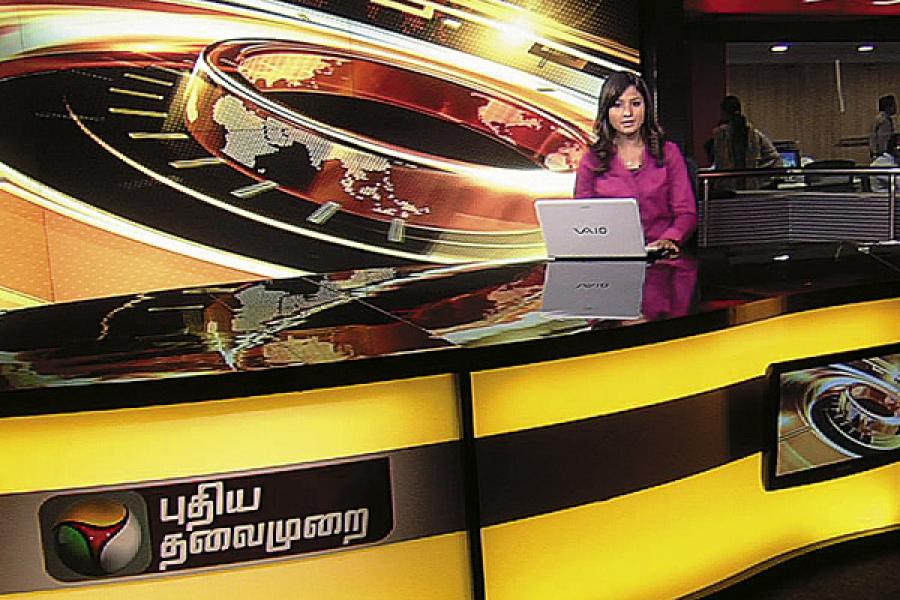 Tamil Nadu has the most balanced media in the whole of India, a long-standing joke in the state went, only, you have to watch two channels to achieve that balance. To know how bad DMK is, watch Jaya, and to know how bad AIADMK is, watch Sun.

Now, a new channel—Puthiya Thalaimurai (PT)—started by a group that runs a university and a few other businesses has been making waves in the state since its launch last August. Its claim to fame: Independence from any political party.

Gnani Sankaran, a political commentator, says PT has kept its promise so far. “Viewers see it as a credible channel, and they have been turning to it.” TAM (Television Audience Measurement) Media Research ratings attest to it. In most weeks this year, PT not only topped the list, but was also way ahead of its competitors. In the week ended May 12, it had a rating of 29.15, and its closest competitor, Sun News had 16.39.  It has performed consistently for advertisers as well, says Kavitha Srinivasan of Mindshare, a media planning company.

Even a couple of years ago, few would have bet on a channel that didn’t depend on political patronage or cinema/entertainment. For years, politics, entertainment and news comfortably shared the same bed in the state. In the ’40s and ’50s, the DMK built its cadre by gathering people in street corners, reading and interpreting news for them. When cinema became popular, they mixed propaganda with the art—Anna and Karunanidhi through their screenplays, and MGR and Jayalalithaa through screen presence. The tradition continued in the era of television too. Sun TV functioned out of the campus of the DMK headquarters for most of its existence, and now that space is occupied by Kalaignar TV.

“When we were thinking about the idea, almost everyone I spoke to said it won’t work here. They said distribution will be difficult. They said there will be political pressure. But here we are,” says P Sathyanarayanan, president, Puthiya Thalaimurai.

What explains the success? Part of the reason, ironically, has to do with politics. When Jayalalithaa took over the government a year ago, one of the first things she did was to revive a government-owned cable distribution company called Arasu to break the monopoly of Sumangali Cable Vision owned by the Marans. The move had an impact on Sun TV’s revenues. A Citi report earlier this year attributed the decline of cable revenues (it was down 45 percent year on year) to the revival of Arasu. But it also made the entry for a competitor like PT easier.

However, that’s only part of the reason. “It was a demand waiting to be met, says RBU Shyam Kumar, director-operations at PT, who was earlier with the Times of India, and helped launch its Chennai edition. He moved to PT to launch a magazine, Puthiya Thalaimurai, that targeted youngsters, but without depending on the usual fare of cinema and politics. The success of the magazine—its circulation is about a lakh now—indicated that an independent news channel focussing on real issues like education, health and infrastructure would succeed. PT’s campaign started on August 15 last year, with a tagline that translates to ‘freedom to know the truth,’ and the channel itself was launched nine days later.

One journalist spoke about the early days. PT’s first dial-in show was about to go on air and they were preparing for the embarrassment of a show without a single person calling in. However, the moment the show went on air, hundreds of numbers showed up on the panel. They knew then that they were doing something right.

PT has not just positioned itself as an independent channel, it has also invested in news gathering. When Cyclone Thane hit the coastal areas of Tamil Nadu, PT hired a helicopter and took a couple of farmers on board while reporting. It sent its reporters to cover a human rights convention at Geneva. During the protests in Kudankulam, it had three reporters on the site.

The channel has aimed at not being only regional. It has a bureau in Delhi and started its innings there by covering Anna Hazare’s protests. Recently, it sent a reporter to Chhattisgarh to cover the abduction of a district collector. And people watched. It’s simple, says, S Srinivasan, director-news, who was earlier with Mint and Headlines Today. “If you do good journalism, it’s good business.”

Which also means, you shouldn’t pay too much attention to Television Rating Points or TRPs. “I know how crazy it can get if you go down that road,” says B Kailasam, head, creative, PT. Son of the renowned filmmaker K Balachandar, Kailasam was producing soaps for general entertainment channels, before he got fed up with the mindless pursuit of TRPs. He took a sabbatical for a few years, and joined PT to head its talk shows and longer features. Now, he tells his team: “We are a diverse set here, let’s do what we are passionate about, let’s have the faith that what works for us will work for our audience.”

That seems to have worked so far. One of its shows Ayudham Seivom (let’s make tools)—a phrase from a popular song by Bharathiar—is about rural innovations and has turned out to be a huge success. Similarly, Kazham Irangivargal (those who stepped into the battlefield), a programme on entrepreneurs, found a lot of resonance with the audience. Another show, Konjam Soru, Konjam Varalaru (a little bit of food, a little bit of history) is a food programme that also delves deep into history. It has become a hit.

Behind the idealism and the confidence of having seen early success, PT also has a systematic and calculated approach to build its own brand and expand viewership. A while ago, it roped in Giri ‘Pickbrain’ Balasubramanian (quizmaster for the Tata Crucible quiz show on CNBC-TV18) to conduct quiz competitions in places such as Chennai, Madurai, Trichy and Coimbatore. Some time ago, it organised an awards function to felicitate achievers who were elected based on a state-wide face-to-face survey.

It has also been fairly successful in converting the TRPs into ad revenues. Even when it launched, its rates were that of the market leader, says B Shankar, CEO of Fourth Dimension Media Solutions, a part of SRM Group which handles PT’s media sales (among other TV channels). Sathyanarayanan reckons the company will break-even before 24 months of operations. Over the next few years he plans to expand to neighbouring states as well.

However, it’s a bit early to say if PT is having an impact on the way other channels cover news. “A single channel cannot change that. You need more competition for that to happen, and that will take time,” Gnani says.

Tweets by @forbesindia
What To Do In A Restaurant
Americas: Brazil Dips, Canada Slips