What Does Wise Leadership Mean?

Wise leaders are self aware, aware of their prejudices, their social conditioning and thus able to moderate the tendency to be over-optimistic with their intuitive instincts

Over a number of years I have been discussing with business friends the nature of wisdom and leadership. During 2010-2012, we conducted an enquiry into the nature of wisdom from a managerial perspective. We had  a number of questions to ask, including: what does wisdom really mean? Our survey involved 88 executives in Western countries and 94 Chinese executives – most of our survey respondents worked in commercial organisations at the most senior levels.

Management has often been regarded as a fact-based scientific approach and managerial decision-making requires knowledge (technical expertise, data, facts) and a rational approach. We asked our respondents if, in their experience, they could describe how wisdom might add something more to the decision making process. 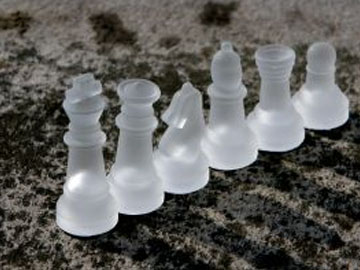 Our respondents gave us 18,000 wise words which we have analysed and mapped.  For example, a VP of a multinational insurance company described wisdom as “the critical element that separates good decisions from brilliant, successful decisions, as well as what separates the decision making of effective leaders from that of mere managers or bosses.” We analysed the words with our partners at the University of Queensland Business School. When we clustered the most commonly-used phrases and ideas we discovered that wise decision-making is like a three-dimensional prism of three human faculties: rational capability, intuitive capacity and humane character.

The idea of humane character is near to the way in which Aristotle described the good and proper function of human life as an activity of the soul that expresses genuine virtue or excellence. According to Aristotle, wisdom requires intuition and ‘scientific’ knowledge.  Defining intuition is tricky as there is a slightly mystical dimension to it. Cognitive psychologist, Gary Klein, resists the idea of there being any magical properties to intuition – he says that intuition is the way we translate our experience into action. Hunches, he says, are simply associations and connections rather than anything more visceral.   But Klein’s research leads him to believe that “many business intuitions and expertise are going to be valuable; they are telling you something useful, and you want to take advantage of them.” 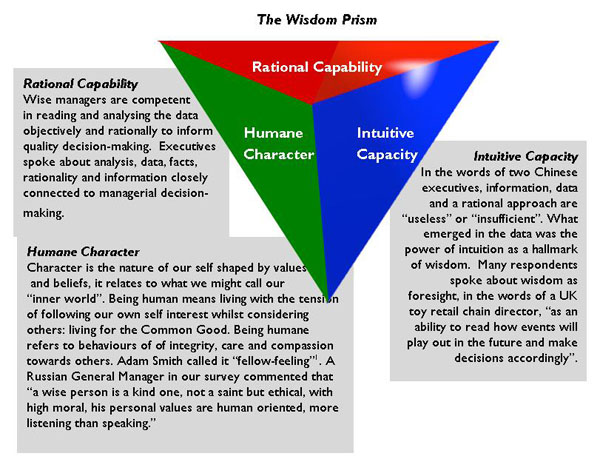 Intuitive instincts require checking wherever possible – primarily with known data points and knowledge using our rational capability. Being aware of the limits of one’s prejudices and expertise is also part of the rational balance to intuitive judgements. But in the twenty-first century we have observed a greater willingness to recognise that intuition and our sense of self is not fully explained by cerebral reason or ‘scientific’ knowledge alone.  Science can only measure outward behaviour not what people refer to as ‘gut instinct’. A number of psychologists have tried to construct psychological models and psychometric measures to identify  ‘wisdom-related performance’ and the relationship of wisdom with intelligence, personality and age. Even some neurobiologists are showing interest in the potential clinical significance of wisdom for rehabilitative interventions. But we are also witnessing a push-back against a ‘scientism’ that relies on what Professor Raymond Tallis calls “Neuromania and Darwinitis”.  Tallis has recently written that “to seek the fabric of contemporary humanity inside the brain is as mistaken as to try to detect the sound of a gust passing through a billion-leaved wood by applying a stethoscope to isolated seeds.”  The current interest in meditative, mindful and spiritual practices is an example of how we continue our search for humanity and the humane in spheres beyond biological and neuroscientific explanation.

However we might explain the place of intuition, it arises in the context of wisdom studies. In a hallmark study of wisdom and leadership, McKenna, Rooney and Boal explain the intuitive capacity of wise leaders as encompassing experience, self-understanding and a metaphysical quality. Wise leaders, they say acknowledge “the sensory and visceral as important components of decision-making and judgment…that does not bind them absolutely to the rules of reason thereby enabling vision, insight and foresight.”  Wise leaders are self aware, aware of their prejudices, their social conditioning and thus able to moderate the tendency to be over-optimistic with their intuitive instincts. But also they have learned to value intuition, having learnt to use it well in combination with their rational capability and experience.

So, what has all this to do with the complexity of management in business today? I cannot answer the question adequately in this short article but I can summarise four principles that come through our survey of 182 executives and support findings by wisdom research professors McKenna and Rooney of the University of Queensland Business School:


Despite all the bad press about some business leaders, there are many business leaders that demonstrate wisdom in their judgment and leadership. Paul Polman, CEO of Unilever has been praised for his selfless energy to lead his company to serve the Common Good and has made clear he only wants shareholders who are with Unilever for this kind of long-term project. And for the advocates of ‘Creating Shared Value” (CSV), Unilever’s share price continues to outstrip its competitors on the New York Stock Exchange. John Mackey, founder and CEO of Wholefoods, has demonstrated the wisdom of creating a company for the Common Good following his vision for “Conscious Capitalism”. And then there are the many business leaders who do not attract the media headlines who are admired within their own circles for their capacity to live beyond their self interest in making judgments that serve the good of all. This does not mean that wisdom does not take care of one’s self interest, it simply means that there is a wisdom to live for a bigger world and to combat the bad news with some good news about companies and brands that want to do good in the world as well as deliver financial returns.


1. Klein, G., 2003, The Power of Intuition: How to Use Your Gut Feelings to Make Better Decisions at Work, Doubleday, New York, p. 4.
2.  Gary Klein interviewed by McKinsey Quarterly, “When can you trust your gut?”, March, 2010. Source: https://www.mckinseyquarterly.com/Strategic_decisions_When_can_you_trust_your_gut_2557
3.  Raymond Tallis, 2011, Aping Mankind: Neuromania, Darwinitis and the Misrepresentation of Humanity, Acumen Books, Durham, UK, p.11.
4.  McKenna B., Rooney D. and Boal K., 2009, “Wisdom principles as a meta-theoretical basis for evaluating leadership”, The Leadership Quarterly 20, p. 179.

Tweets by @forbesindia
Lessons From The Dark Side Of Capitalism: How Pirates Help To Shape New Industries
Podcast: The World's Billionaires