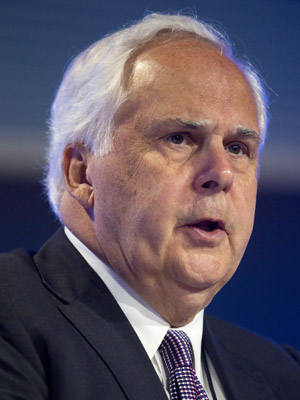 Childhood Challenge
Born in 1944, Smith is crippled by a bone disease as a small boy and watches sports from the sidelines. Regains his health by age 10, becomes an excellent football player and learns to fly at 15.

The Big Idea
Enrols at Yale in 1962. A disagreement with a professor leads to his developing the business model for an express delivery service. Decides it will need to carry small, high-priority packages at night, when airports aren’t congested.

G.I. Fred
Joins the Marines in 1966 and does two tours in Vietnam. Narrowly survives a Vietcong ambush after losing his helmet, grenade and gun. Brings his attacker down by aiming at his head but then hitting him in the knee.

Takeoff
Returns to the idea he developed at Yale and founds Federal Express in 1971 after raising a then astonishing $91 million in venture capital. Operations start in 1973.

A Big Gamble
In his first 26 months in business he racks up $29 million in losses. Desperate to pay bills, he flies to Las Vegas, wins $27,000 at blackjack and wires it back to FedEx. Yet by 1976 FedEx is flying smoothly and bringing in $75 million in revenue, though it remains heavily indebted. It goes public in 1978.

Turbulence
Looks east to Asia in 1989 with the $880 million purchase of the Flying Tiger cargo line. Integrating the two is difficult, and FedEx’s net income drops from $185 million in 1989 to just $6 million in 1991.

Pacific Overtures
In 1998 introduces the only next-business-day express cargo service from Asia to the US. It pays off. An international priority delivery brings in more than three times as much revenue as a domestic one.

The Crash
The Great Recession batters FedEx. The company barely ekes out a $98 million profit in 2009, down from $2 billion two years earlier.