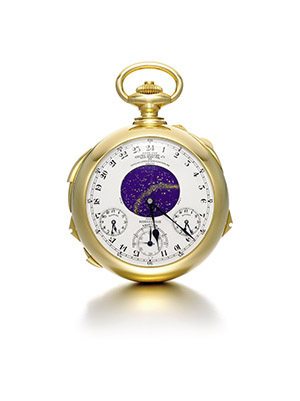 Considered the Holy Grail of timepieces, this 1933 pocket watch by Patek Philippe is expected to fetch $17 million at an auction in November what makes a watch the most valuable in the world? It’s super-complicated—literally. In 1925, banker Henry Graves Jr (considered the greatest watch collector of the 20th century) commissioned Patek Philippe to create a unique gold pocket watch. When Graves finally received it—eight years later—it was the most complex timepiece ever created by human hands. Among the watch’s 24 horological complications were a perpetual calendar, moon phases, a power reserve and the night sky of New York City. In 1999, Sotheby’s sold the Graves watch for $11 million, breaking the record for the most expensive timepiece ever sold at an auction. This November, to coincide with Patek Philippe’s 175th anniversary, the Henry Graves Supercomplication is returning to Sotheby’s. Now billed as the ‘Holy Grail of watches’, it is expected to set the record once again, with a pre-sale estimate of $17 million. But only time will tell.