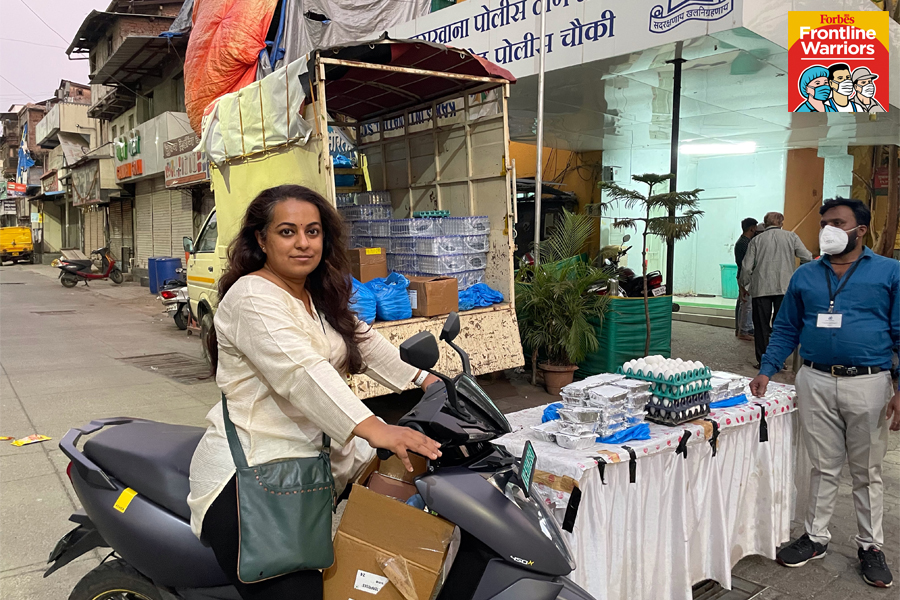 Megha, 2, was anxious to know why Aakanksha Sadekar hadn't come to deliver food to her home that day in April. The 32-year-old petroleum engineer explained to the little one that she just wanted to get some rest, when Megha replied, “Maasi, kal aana!” (Aunty, come tomorrow). Sadekar’s acquaintance with the little girl was just limited to meeting her for a few minutes while distributing food in her locality. That day, however, she realised that even random acts of kindness could help you build a family that looks forward to seeing you every day. “These families depend on me and I have to take care of them,” she tells Forbes India.

Ever since Sadekar, a British Indian, relocated to Pune in November last year, she has been pursuing her hobbies of cooking and driving, balancing it with her enterprise in the oil and petrol industry. She started with cooking home-made meals for her cousin who was a medical intern at the nearby Kashibai Navale Hospital and Medical College. Soon, India was caught up in the gruesome second wave of the pandemic, with Pune being one of the worst-hit cities in the country. On the heels of it, lack of access to food supplies became a reality.
On microblogging site Twitter in early April, Sadekar saw tweets by her medic friend who had to go hungry after a 12-hour shift, since it was too late for apps to deliver food. The next day onward, she took it upon herself to cook and deliver 10 extra packets for him and his colleagues. Soon, through word-of-mouth, more requests came in from the facility.
Sadekar now serves 100 meals a day from her home kitchen for the medical facility.
One day, as she was on her way to deliver food to the health workers, she was stopped by a cop with whom she got talking. She felt empathetic toward the fact many police personnel have to work long hours without access to home-cooked food, so the next day she reached the police station with a dabba.
The policeman then told her about the 2,000-odd street dwellers and their children in and around the Budhwar Peth and Shaniwar Peth areas of Pune. Apart from the 100 meals she was already serving to the medical facility and a few more to the police personnel, she decided to arrange food packets for the street dwellers too. She asked people on Twitter to help, and a hospitality entrepreneur stepped up to offer his warehouse along with two cooks. He promised this would add a daily capacity of about 750 meals.
The next day, April 10, the cops went out to Budhwar Peth and Shaniwar Peth and informed people that food would be distributed at the police station. Sadekar arrived that day with 500 packets of food, which got over in about 30 minutes and many street dwellers had to go back home without food.
Sadekar was determined to solve the problem and scale up the initiaitve. While she turned to Twitter for help again, the same day, she happened to stop by a canteen near the MIT campus for a cup of tea. There, she noticed the canteen feeding many security guards and construction workers from the nearby areas. She approached the canteen owner with her idea of distributing food for the street-dwellers. He worked out the logistics and the cost with Sadekar, arranged for two additional cooking stoves and hired 2-3 more people. With this, she was able to add about 1,200 to 1,500 food packets per day to what was being made at home and the warehouse of the hospitality entrepreneur.
Each food packet comprises rice or three rotis, one sabji and dal. The 200-odd children in and around the Budhwar Peth and Shaniwar Peth areas also get one egg each. On days when there is surplus food, it is distributed outside Sassoon hospital or railway station.
Around the same time, Sadekar has mobilised a small group of people via Twitter connections, who volunteer and help distribute the food packets. Freelance content writer Akanksha Mathur Sharma, for instance, handles the back-end work, including social media, for the initiative [which Sadekar runs through her Twitter handle Scottish Ladki]. Electric Vehicle manufacturer Ather Energy has given Sadekar a scooter for delivering the food. As of May 7, Sadekar had distributed a total of 20,000 food packets to the street dwellers, medical workers and police personnel. She has self-financed the initiative, though she’s now got help from close friends and Twitter.
Her penchant for a drinking tea often leads to her sitting with local residents in every location. These interactions have helped her realise some of the issues faced by people in different localities. For instance, though there are NGOs in these locations, transpeople find it difficult to access food and ration kits. To tackle this challenge, Sadekar now works with Anita, a transperson, who helps her reach out to the community and distribute food. “Yesterday, on Mother’s Day [May 9], a street dweller who was over 50 years old told me that I take care of them like a mother,” Sadekar says. For her, that is the biggest motivation to keep going.

Tweets by @forbes_india
At India's funeral pyres, Covid-19 sunders the rites of grief
The psychedelic revolution is coming. Psychiatry may never be the same.