How to build a better Tesla

If Elon Musk is Tony Stark, then Rivian founder RJ Scaringe is Clark Kent. Meet the mild-mannered entrepreneur whose battery-powered SUVs and pickup trucks are electrifying the auto industry 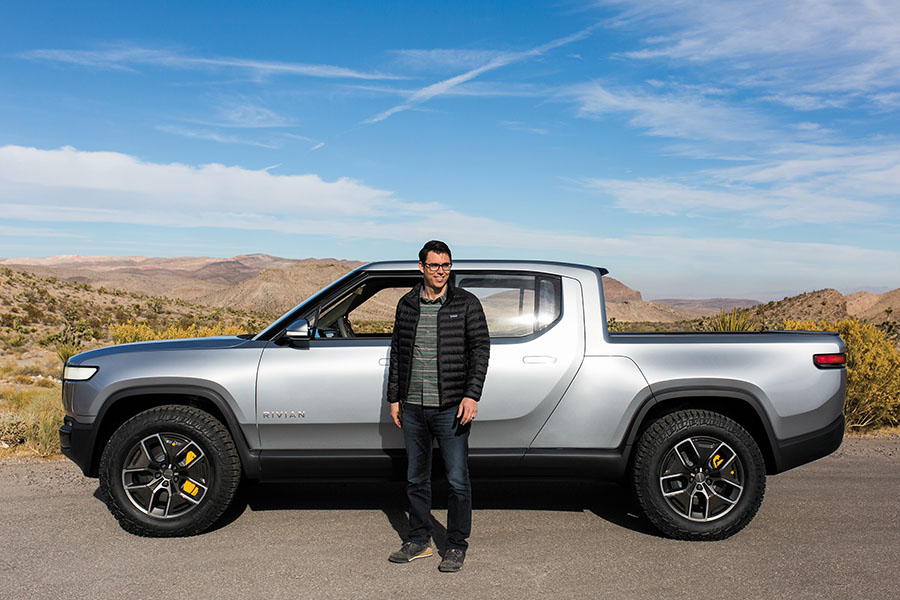 Off-road warrior: RJ Scaringe named the company in honour of the Indian River Lagoon near where he grew up in Florida
Image: Courtesy Rivian Automotive

The talk of November’s Los Angeles Auto Show wasn’t Mercedes-Benz, Porsche, BMW or any of the usual luxury car suspects. Rather, the buzz was created by a little-known electric-vehicle (EV) builder, Rivian Automotive, based in Plymouth, Michigan. After nearly ten years of developing EV technology, the company unveiled its first two battery-powered autos: The R1S, a seven-seat sport utility vehicle, and the R1T pickup truck.

Designed for people with active lifestyles, the so-called adventure vehicles exhibit a Range Rover aesthetic—rugged, capable and luxurious—and are packed with the latest high-tech amenities such as internet connectivity and a host of autonomous driver-safety features.

Scaringe’s love affair with “things that move”, as he puts it, began as a child. As soon as he was old enough to handle tools, he helped a neighbour rebuild Porsche 356s in his garage in Melbourne, Florida. “My favourite was a late-1950s Speedster,” Scaringe says. By high school he had become obsessed with the idea of building his own brand of automobiles, and he gained the knowledge to do so by earning his doctorate in mechanical engineering from MIT’s prestigious Sloan Automotive Lab.

While there, however, the budding automaker became conflicted. “It was frustrating knowing the things I loved were simultaneously the things that were making the air dirtier and causing all sorts of issues, everything from geopolitical conflict to the smog to climate change,” Scaringe says. So he changed course, deciding to focus on environmentally friendly EVs.

A slow-rolling startup, Rivian was founded in 2009 and began to develop an electric sports coupe, much like Tesla’s Roadster, Scaringe admits.

But within a couple years, that plan was shelved. “[We weren’t] building something that the world truly needed that was different than other things in the market,” he says. Undeterred, the young entrepreneur changed directions once again, redefining the company’s mission around the future of mobility and focusing on luxury utility vehicles. 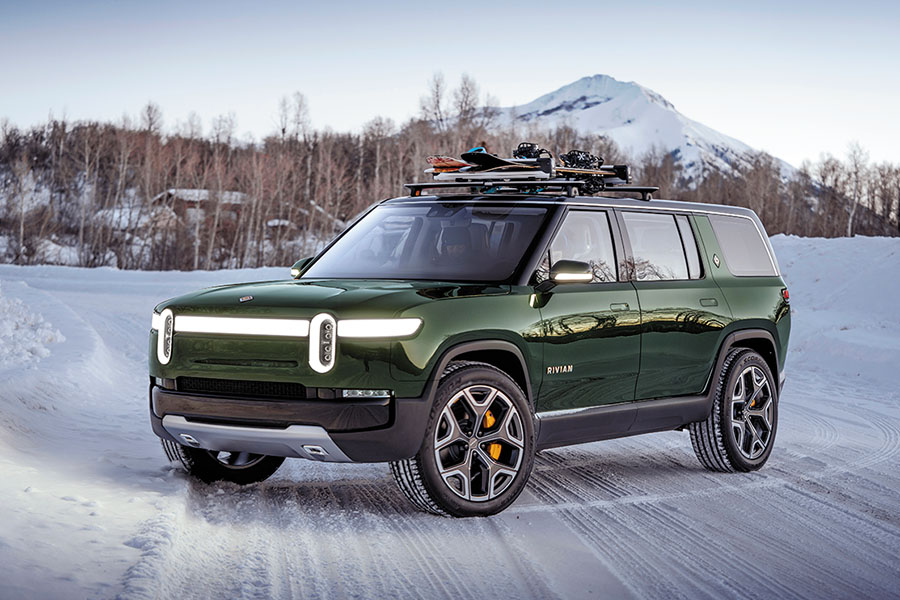 The R1S, a seven-seat sport utility vehicle, in its natural habitat

So why has it taken nearly a decade to produce any vehicles? “[We’ve been] getting all of the pieces lined up,” Scaringe says. That consists of developing the technology, putting together a strong business plan, building the organisation, and setting up a supply chain and a manufacturing system.

He’s also spent years building a dream team of engineers and designers, including Mark Vinnels, Rivian’s executive director of engineering, who came from McLaren (where he developed the much lusted-after 720S and MP4-12C), and Jeff Hammoud, the vice president of design and a veteran of Jeep, where he oversaw the Grand Cherokee and the Wrangler.

Rivian employs around 700 people, half at its engineering centre in Plymouth; most of the rest are at tech centres in San Jose and Irvine, California, with a few at an engineering facility in the UK. More will be added over the next two years as the company ramps up manufacturing operations at its facility in Normal, Illinois, a former Mitsubishi plant Rivian acquired in 2017 for $16 million. 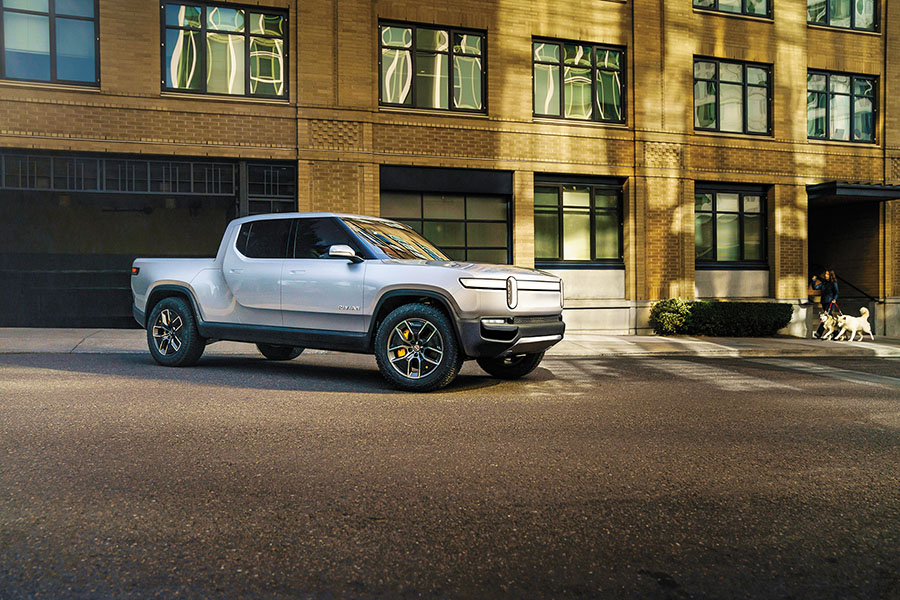 Technically speaking, the R1T and R1S are similar. They are based on the same skateboard-style chassis (meaning that all mechanical components—battery, drivetrain, suspension—are contained in it). They claim to offer outstanding performance, including up to 400 miles of range, which is nearly 75 miles more than any other EV currently on the road or in the pipeline for the next two years. And they promise exceptional handling and sports car speed—both will be able to sprint from zero to 60 mph in three seconds. Above all, Rivian promises genuine offroad ability. Try driving your Tesla on the dunes of a beach or up a rocky hill.

Once production starts in Normal next year, the company, like Tesla, plans to sell directly to consumers, strategically placing a few display shops around the US to get the Rivian name in front of the right customers. To provide more options, a five-passenger utility vehicle is also in the works, with more adventure models to come later, says Scaringe, who is careful not to overpromise: “I tend to be quiet to outsiders about what we’re doing. Let the results speak for themselves.”

A potentially more profitable revenue stream will come from selling Rivian’s technology to automakers and tech companies. “We can leverage our skateboard technology in its entirety or sell pieces of it, such as the battery pack,” Scaringe says. Although no partnerships have been announced, Rivian is in negotiations with a well-known brand that’s not a traditional automaker—but it won’t rule out working with one in the near future.

“RJ has built a company that can pivot on a dime,” explains John Shook, a member of Rivian’s board of directors and a former production manager for Toyota in the US and Japan.

Now that his lifelong mission to become a carmaker is a reality, Scaringe believes his priorities as a CEO include making sure the direction of the company is clear, that the right team is in place and that the culture allows people to work without silos or bureaucracy. But if push came to shove, the MIT engineer would rather be in the lab: “I really enjoy working our network architecture, thinking of our skateboard platform.” In other words, RJ Scaringe has just started rolling.