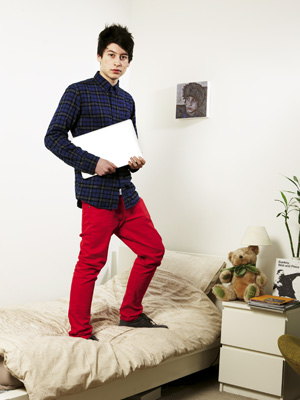 Nick D’Aloisio stares out the window of a hired car at the glow of evening traffic. He has just waved good-bye to his entourage at Heathrow Airport and is en route home to London with the surreal events of the last week playing in his head: Meeting Ashton Kutcher in Los Angeles, walking into the minimalist studio of Apple’s head designer, Johnny Ive, sitting with mobile analyst Mary Meeker, then flying to Munich to speak at the Digital Life Design conference. Wearing bright-red jeans, purple sneakers and a blue checked hoodie, he chatted breezily onstage about the iPhone app he created on his bedroom computer.

Summly simplifies and boils down the content of Web pages—reference material, news items, Quora answers, you name it—to a few bullet points. In the audience was Arianna Huffington, who was so impressed she tweeted about him. “Oh, and he’s 16,” she added.

This was a popular addendum to the buzz around D’Aloisio, along with labels like “boy genius” and “wunderkind”. Sure, Mozart had already written eight operas by age 16, and Pascal had produced his first theorem. But neither of them ever managed to raise a round of funding from Horizons Ventures, the private investment vehicle of Hong Kong real estate billionaire Li Ka-shing—a backer of Facebook, Siri and Spotify—as D’Aloisio did late last year. Horizons has been showing off its latest star, flying him to Silicon Valley and trotting him around to meet key tech figures—with his mom in tow.

Where did this kid come from? Born in Australia, D’Aloisio started reading college textbooks about astronomy at age six and staring into the broad, star-filled sky Down Under. “There was no light pollution,” he recalls. He also studied Caterpillar trucks, then made 3-D animated films on the sophisticated movie software Maya and obsessed over model trains.

By age 12, when D’Aloisio moved to London with his father, a vice president at Morgan Stanley, and mother, a lawyer, he started conquering computers. When he discovered that anyone could develop an app for the iPhone, he learned programming by downloading Apple’s SDK (software development kit) and buying reference books from Amazon, then adapting what he learned to his own experiments.

In between classes and the occasional rugby game, he created an app called SongStumblr, which used Bluetooth to show users what people nearby were listening to. He taught himself the basics of artificial intelligence software and built an app called Facemood, which tells you the emotional state of your friends by monitoring their Facebook status. He never revealed his age online and after three years netted roughly $30,000 from one-off sales of his apps, about $1.50 each, after Apple’s 30 percent cut. By 15, he’d set up his own company; his mother signed all legal documents, since he was underage.

D’Aloisio never discussed his hobby with his classmates at Kings College, one of the UK’s top private schools and part of the elite Eton Group attended by Prince William. But school played a role in his next venture. Last year, while studying for a history exam, he grew frustrated with the flood of text from Google search results. Paradoxically trying to save time, he poured himself into writing a program to summarise content in an easily digestible preview.

He used his knack for languages—he was studying Latin, Mandarin and French—to create a program that could extract the most relevant sentences out of long text. Microsoft Word once had a summarising tool that ran on a “linear” algorithm that searched for the most frequent keywords sequentially.

D’Aloisio figured he could do better with a “genetic” algorithm that could be trained to choose important sentences as a human does, in any language. The program detects the topic of a text and on that basis applies particular metrics to determine, say, if numbers are more important than descriptive words, and extracts critical sentences accordingly.

Surely, this could be used for a lot more than just a personal study tool, D’Aloisio realised: A service for media companies, financial institutions, law firms or any organisation having to extract key points from scads of data. “We could train the algorithm to get good at summarising certain authors,” D’Aloisio says in between mouthfuls of cheeseburger at a trendy grill in Shoreditch, an up-and-coming neighborhood in London, full of artists and startups.

D’Aloisio spent last summer honing his knowledge of AI and writing code. He contacted a linguistics researcher at MIT’s Semantics Lab and paid him $250 to analyse the algorithm. Conclusion: Summly came out 40 percent closer to how people actually constructed summaries than competitors did—good enough for D’Aloisio to release a free app (then called Trimit), which ran on an iPhone and received regular updates as he refined it. A patent search revealed that, despite those for a half-dozen similar apps, none featured the trained, AI component or tie-in with the iPhone. He set up a website and a demo video on YouTube.

Exuberance—and inexperience—led him to his first big blunder. D’Aloisio started bombarding reporters, including this one, with hundreds of pushy emails, begging for coverage. Mild interest from tech blog Gizmodo sparked more than 100 emails, oozing histrionics. “Please reply?! We really need to know if we can get this article out today?” went one. In others he lied in desperation about getting fired if his app didn’t get press coverage.

Deciding the app was half-baked anyway, Gizmodo featured Trimit as “worst app of the week” and published hit tunes from his worst emails. “I thought it was a bit harsh,” D’Aloisio says. But, he adds, “I wouldn’t have been found if I hadn’t done that. I’m not ashamed.”

By then he had bigger concerns. Two investment funds contacted him via his website last July. One was Li’s Horizons Ventures; Solina Chau, the fund’s founder and manager, had seen a story about Trimit on TechCrunch and was intrigued by the technology. (Horizons had already sunk $15.5 million into Siri, the AI-based virtual assistant application later bought by Apple and integrated into the iPhone.) When D’Aloisio mentioned his age (then 15) at the end of the first call with Horizons, they were shocked but “very excited”, he says.

There were more conference calls while D’Aloisio emailed documents about his proprietary tech to Hong Kong. “Since the Siri launch with Apple, so many companies are trying to put a stamp of artificial intelligence on what they do, and the vast majority is not AI,” says Frank Meehan, a Horizons board member who took part in the investment. But D’Aloisio’s AI was completely legit, he adds. After due diligence Chau gave her thumbs-up, and Horizons bought a 25 percent stake for $300,000 last September.

D’Aloisio was over the moon and spent half the money on contractors. No Xbox 360 or trip to Disney World for this kid, who has to clean up his own room but gets no allowance from his parents. Within three months Summly, as the app was now called, had been downloaded 130,000 times (all gratis to build recognition).

While Kings College gave him several months off, D’Aloisio haunted Shoreditch in search of office space. Meehan and others at Horizons counselled him on how to deal with other companies (and the press). “Your brain may work at light speed,” Meehan told him, “but other people also have other things on their plates.”

How will he make money? D’Aloisio plans to license Summly to Web browsers, search engines and media and financial companies, hoping to charge for either a regular subscription or every 1,000 summaries—fees to be determined. He is currently talking with Stanford University, Cambridge and MIT about research partnerships.

Those discussions keep an eye on continuous improvement of his app. D’Aloisio is trying to hire a handful of full-time programmers who will train the algorithm to mimic choices made by humans. This is a tedious and time-consuming process, and involves reading thousands and thousands of Web articles (such as Wikipedia, movie reviews, Quora answers), choosing the three to five most important sentences and feeding them into the system.

That, he explains, is where search is headed over the next five years. “By then the Internet will have sorted out curating and indexing,” he says.
Search interfaces like Google haven’t changed in a dozen years, despite the dramatic rise in content. But that’s changing. “There will be a lot of AI-based curation services,” D’Aloisio predicts.

Some experts believe humans will trump robots and algorithms in guiding our future selves around the Web. “The real question for Summly is just how prevalent the behaviour of search will be in the near future,” says Steven Rosenbaum, author of Curation Nation. D’Aloisio puts it slightly differently: “Humans will change the paradigm, robots carry out the action.”