Festivals and events of the season 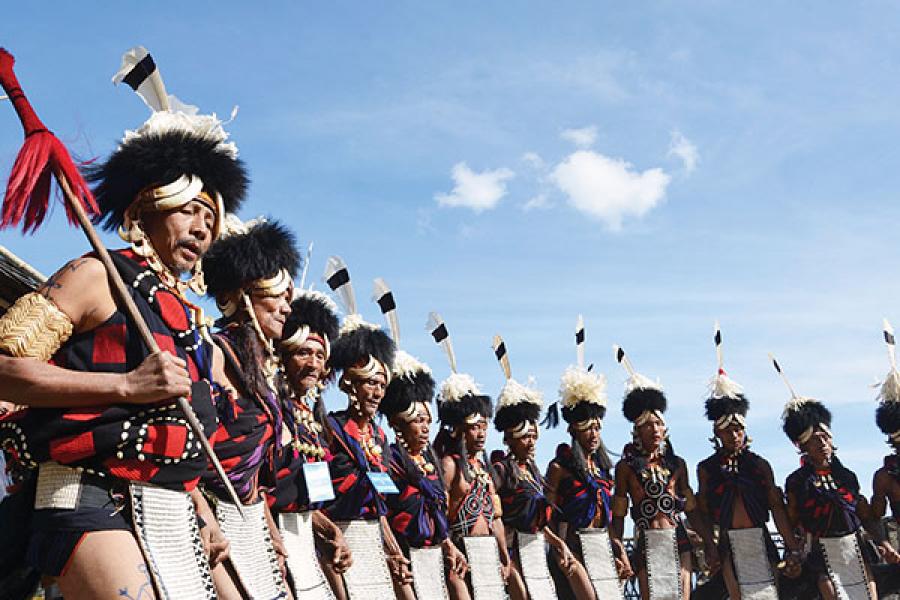 Image: Getty Images
Indian Naga tribesman perform on the first day of the Hornbill Festival at Kisama, some 15 kms away from Kohima

Gatherings
The Hornbill Festival
Naga Heritage Village, Kisama (near Kohima), Nagaland; 01–10 December
hornbillfestival.com
The many tribes of Nagaland each have their own festivals. To encourage unity and interaction between them, the state government organises this festival every year, featuring performances and sporting events, as well as displays and sales of local arts and crafts. And yes, there’s a rock contest! 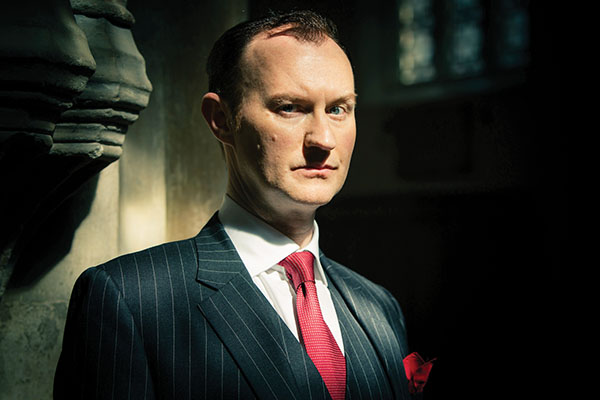 Image: Hartswood Films
Mark Gatiss, who plays Mycroft Holmes in Sherlock, will be a crowd-puller at ComicCon

Mumbai Film & Comics Convention
Mumbai, Maharashtra, 19–21 December
comicconmumbai.com
Comics conventions—and, indeed any kind of pop culture conventions—are a somewhat recent phenomenon in India, with nothing like the cult followings one would see in, say, the US. ComicCon India has been beavering away at it, with meets in the metros over the last few years. The Mumbai edition also includes cinema, and this year’s headliner is Mark Gatiss, co-creator and producer of the hit TV series, Sherlock.

Times of India Literary Festival
Mumbai, Maharashtra; 05–07 December
timeslitfest.com
The Old Lady of Bori Bunder jumped onto the litfest bandwagon in 2011, and, truth be told, it does a good job of it, bringing together a mix of the intellectual and the crowd-pleasing, stirring in some performances, helped along by the venue, the refurbished Mehboob Studio premises. Among the marquee names this year: Pico Iyer, Arianna Huffington, Naseeruddin Shah, Amish Tripathi, Upamanyu Chatterjee, Chetan Bhagat, Devdutt Pattanaik, Jeet Thayil, William Dalrymple, Manu Joseph, and (perhaps to ensure that other must-have litfest ingredient, controversy) Tarun Tejpal. 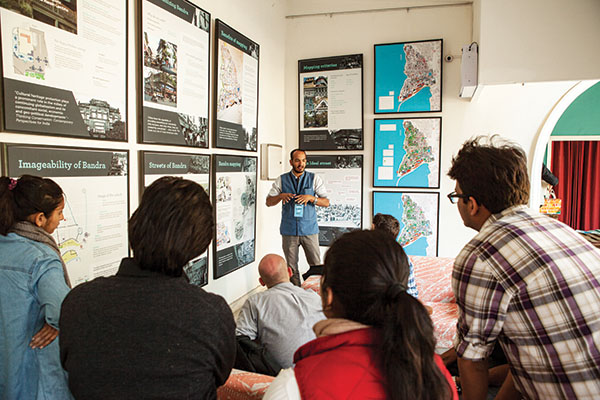 Unbox Festival
New Delhi; 12–14 December
unboxfestival.com
Not quite the mela type, this is more of a celebration of ideas. It specialises in interdisciplinary collaboration, throwing creative, academic, and development professionals into a mixing bowl of discussions and workshops, performances and exhibitions. 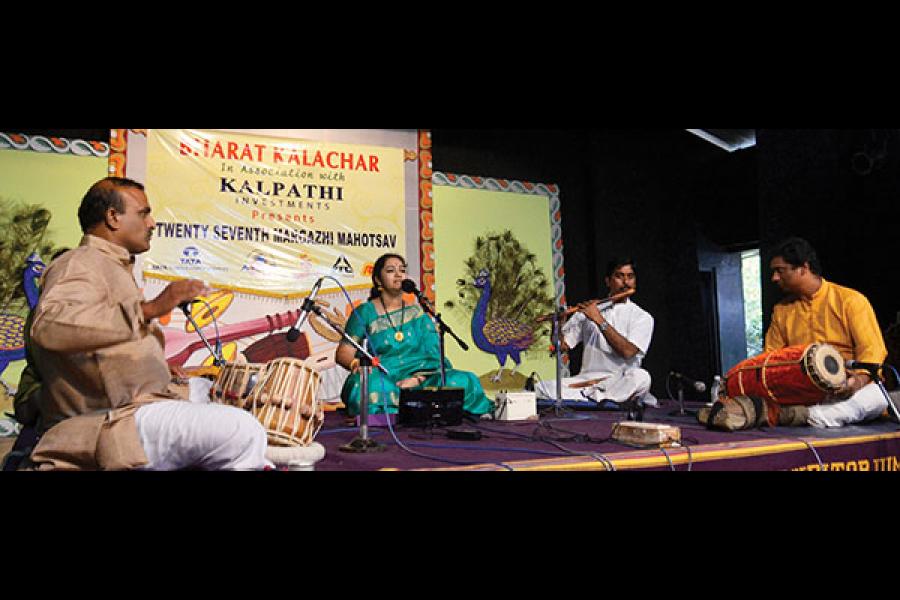 Image: M Shrinath / The Hindu
Spotlight
Madras Music Season
Chennai, Tamil Nadu, December 2014–January 2015
Right through the Tamil month of Margazhi, which runs roughly from mid-December to mid-January, the city reverberates to the sound of Carnatic music, with ‘sabhas’, associations of music aficionados, hosting concerts in practically every nook and corner. As many as 40,000 listeners turn up to listen to 2,000 concerts by 400 musicians in eight languages, not to mention performances by 150 classical dancers. 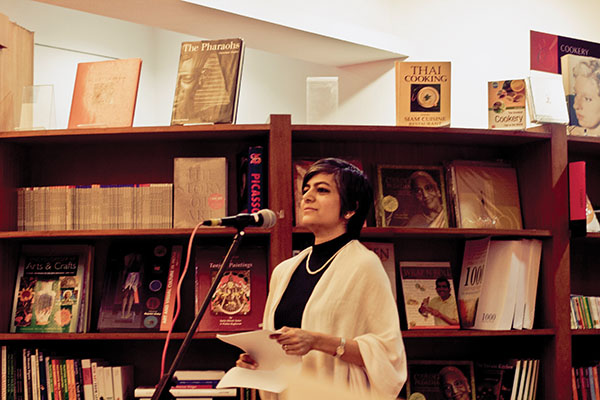 Prakriti Foundation gives a platform to new and old poets

Poetry with Prakriti
Various locations, Chennai, Tamil Nadu; 03–10 December
poetrywithprakriti.in
Now in its eighth year, this annual festival from the Prakriti Foundation gives poets unusual platforms in which to find and interact with audiences. Some of the poets this year are Arundhathi Subramaniam, Dibajyoti Sharma, Bishnu Mohapatra and Aditi Rao.

Jesus Christ Superstar
Mumbai, Maharshtra
Alyque Padamsee, yesteryears’ advertising star, also has quite a reputation in the gateway city as a theatrical impresario, with Evita being, arguably, his signature show. Padamsee hasn’t done a new production in quite a while, but December will bring in his staging of the musical that made Andrew Lloyd-Webber and Tim Rice famous.


Fresh off the shelves
• Start-Up Cities: Discovering the Global Hotspots of Innovation, Zafar Anjum, Rs 499
• The Rebel: A Biography of Ram Jethmalani, Susan Adelman, Rs 599
• Editor Unplugged: Media, Magnates, Netas and Me, Vinod Mehta, Rs 599
• The Spirit of Indian Painting: Close Encounters with 101 Great Works 1100 – 1900, BN Goswami, Rs 1499
(All Penguin Random House)
• Bloomsbury’s Sigma imprint sounds interesting to us. It features what the publisher calls ‘accessible’ science writing, something we haven’t had a lot of in India. Forthcoming titles include: Sex on Earth, P53: The Gene that Cracked the Cancer Code, and probably irresistible to Indians of a certain age, A is for Arsenic: The Poisons of Agatha Christie.