Two decades ago Joe Magliocco revived Michter's, a defunct rye and bourbon brand. With it, he changed the industry 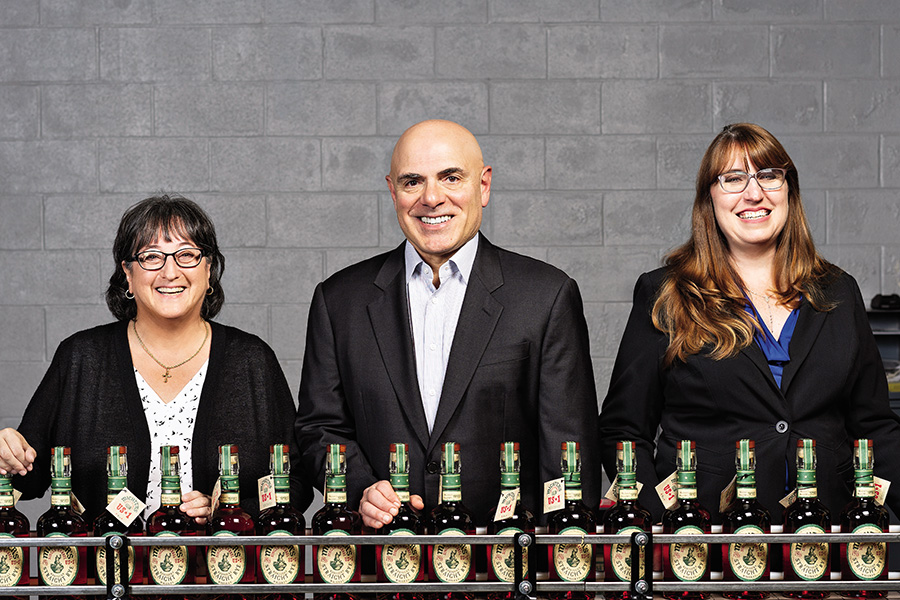 When Pam Heilmann completed one of her first distillations of Michter’s American Whiskey in 2015, the incoming master distiller proudly came to Joe Magliocco, Michter’s owner, with the technical results: From the hundreds of bushels of grain, she was able to produce an extra barrel of whiskey, the equivalent of about 200 bottles. That kind of efficiency mattered in her previous job running distilling operations at Jim Beam’s Booker Noe plant (which makes Knob Creek and Booker’s bourbons, among others). Magliocco, however, was interested in only one thing.

Such straight shooting is a hallmark of the 60-year-old New Yorker, but the focus on quality over quantity is one of the reasons he brought Mich­ter’s back from the dead in the first place. In the mid-’90s, when consumption of American whiskey was at a nadir, Magliocco was looking to add a premium rye to his portfolio at Chatham Imports in Manhattan—ideally with a brand the market had forgotten.

His instinct proved prescient. “I think Joe is one of the main drivers of resurrecting rye brands,” says Eric Gregory, head of the Kentucky Distillers’ Association or KDA. “Everybody has a rye now.”

Magliocco set his sights on Michter’s, whose roots date to 1753, when the distillery—then called Shenk’s, and later Bomberger’s, after new owner Abraham Bomberger—was founded in Pennsylvania. Like many spirits brands, ­Michter’s had an irresistible origin myth: According to legend, George Washington bought enough whiskey at the distillery to get his troops through winter at Valley Forge. (During the 1980s, Michter’s slogan proudly proclaimed it “the whiskey that warmed the American Revolution”.)

Prohibition shuttered operations in 1919, and the brand struggled until the 1950s, when Lou Forman gave it a new life and new moniker: Mich­ter’s, after his sons Michael and Peter. In 1989, however, after a prolonged downturn for the whiskey industry, Michter’s filed for bankruptcy.

Chapter 11 eventually transformed into chapter one for Magliocco, who had his lawyers look into the Michter’s trademark. It had been abandoned. “Nobody wanted to put any time, money or effort into Michter’s,” Magliocco says. “It was worthless.” For a mere $245 in trademark filing fees, the brand could be reborn. Magliocco got straight to work, launching the first of three production phases.

Phase one: Create a taste profile for the new Mich­ter’s by sourcing surplus aged bourbon and rye in existing Kentucky distilleries. For phase two, which began in the early 2000s, Michter’s began creating a whiskey from scratch, using a Kentucky distillery that was operating under capacity to make Michter’s rye and bourbon during some off days.

But his best decision by far in those early ­phases was to relocate Michter’s from Pennsylvania to the heart of bourbon country—Louisville. “There are whiskey resources in Kentucky that you never would have had in Pennsylvania,” he says. “If I had gone to Pennsylvania, I don’t think that an Andrea Wilson or Pam Heilmann would have joined us.”

The additions of Wilson (who previously worked at Diageo and was the first female chair of KDA) as Michter’s master of maturation and Heilmann, who would eventually be named master distiller, brought Michter’s into its third and current phase of production.

Since Wilson and Heilmann arrived, the brand has grown faster than even Magliocco could have dreamt. In December 2013 Michter’s joined the KDA at the “proof” level, meaning a brand with at least 10,000 barrels ageing in Kentucky (like current proof level member Willett Distillery). In 2015 Michter’s was finally operating its own distillery—in a then-67,000-sq-ft former auto supplies plant in Louisville’s Shively neighbourhood. By December 2015 it had vaulted into the “heritage” level, joining the ranks of Brown-Forman, Beam Suntory and other companies that have at least 25,000 barrels of product ageing in Kentucky. The following July, Mich­ter’s added four more 16,000-gallon fermenters and a second production shift to double its capacity to one million original-proof gallons a year.

Michter’s now accounts for about 1 percent of the $3.4 billion American whiskey market, with annual sales that Forbes estimates at $30 million. The whiskeys retail for around $45 a bottle at the low end (for Michter’s US 1 Small Batch Bourbon) up to $5,000 for a bottle of limited-edition sour mash Celebration—though it can be found online for double that amount. The company justifies these prices by taking a “cost-be-damned” approach to production, spending extra on its barrels (which are air-dried for 18 months) and filling them at 103 proof instead of the industry standard 120 and diluting with water at the end.

"Nobody wanted to put any time, money or effort into Michter’s,” Magliocco says. “It was worthless.”

“I think it’s a different business philosophy,” Wilson says of Magliocco, who commutes to Louis­ville at least once a week. “Publicly traded companies have to consider shareholders and profit margins. To come to an organisation like this afforded us tremendous freedom to do what we know really makes a difference but has a cost associated with it.”

The three also attribute Michter’s growth to industry accolades (Wine Enthusiast named Michter’s the Distiller of the Year in 2012), cameos in movies and television (it’s the drink of choice for Bobby Axelrod on Billions) and, of course, the whiskey boom that has generated so many new distillery visitors’ centres that Louisville mayor Greg Fischer calls the trend “bourbonism”. Today Michter’s products are sold in around 50 countries, and a Drinks International survey of the top 106 bars put Michter’s as the No 7 bestselling American whiskey brand—ahead of Jack Daniel’s and Wild Turkey.

Along the way, Michter’s has helped bring consumers to the superpremium bourbon category—meaning bottles that cost more than $30—which at 148 percent revenue growth over the past five years is expanding faster than any other category of whiskey. “Michter’s kind of helped us spawn all this,” says Eric Gregory of the KDA. “I think [Joe] has done an outstanding job of transforming a brand that was ripe for a comeback and is now one of the leading Kentucky bourbon brands in the world. And the proof is the expansion he’s doing.”

That expansion includes the late-2017 purchase of 145 acres in Springfield, Kentucky, where Magliocco is expected to invest a reported $17 million to increase barrel storage and grow crops, as well as a new facility in downtown Louisville. The new location sits on West Main Street, just yards from the official start of the Kentucky Bourbon Trail, and is certain to increase brand awareness. Across the street is a top tourist attraction, the Louisville Slugger Museum, and its 120-foot-tall baseball bat monument. It’s a fitting metaphor: Proof that Michter’s has finally made it to the big leagues.