During her time at the company, Frances Haugen, a former product manager, amassed a trove of internal Facebook research, which she has since distributed to news outlets, lawmakers and regulators to prove that the social network knew about many of the ill effects it was causing 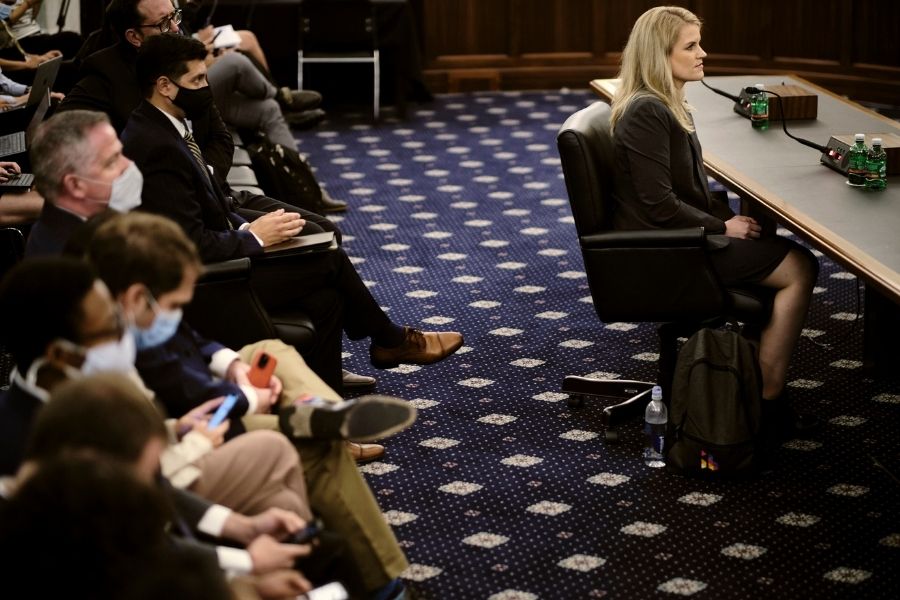 Frances Haugen, a former Facebook employee and whistleblower, testifies before a Senate Committee on Commerce, Science, and Transportation hearing in Washington, Oct. 5, 2021. To counter Haugen’s claims executives at Facebook have conducted live internal events with employees, held emergency briefing sessions and sent numerous memos, according to some of the memos obtained by The New York Times and interviews with about a dozen current and former employees. (T.J. Kirkpatrick/The New York Times)

SAN FRANCISCO — At a question-and-answer session with employees last week, Mark Zuckerberg, Facebook’s CEO, was asked about Frances Haugen, a former product manager turned whistleblower who had testified to Congress about the company’s harms.

Zuckerberg spent about 20 minutes discussing the whistleblower, her testimony and recent media coverage, all without mentioning Haugen by name, according to a recording of the meeting obtained by The New York Times. Some of her assertions on how the platform polarizes people, he told employees, were “pretty easy to debunk.”

The CEO's comments were part of an internal effort that Facebook has begun to manage the fallout from Haugen’s revelations. Even as Facebook executives have publicly questioned Haugen’s credibility and called her accusations untrue, they have been equally active with their internal positioning as they try to hang on to the goodwill of more than 63,000 workers and assuage their concerns about the whistleblower.

To counter Haugen’s claims — which were backed by internal documents that showed Facebook’s services hurt some children’s self-esteem and abetted human trafficking — executives have conducted live internal events with employees, held emergency briefing sessions and sent numerous memos, according to some of the memos obtained by The Times and interviews with about a dozen current and former employees. Company officials have also provided information on how employees should respond when they are “asked questions about recent events by friends and family,” according to one memo.

Facebook has acted swiftly as employees have become divided on Haugen, the people said. In internal messages from the past week shared with The Times, one worker said that Haugen was “saying things that many people here have been saying for years” and that the company should listen to her. Another called her testimony “amazing” and said she was a “hero.”

But others said Haugen should be served with a cease-and-desist order or sued for breaking her nondisclosure agreement with Facebook. Several disparaged her for lacking knowledge of the topics she addressed in her congressional testimony, according to the messages viewed by The Times.

The employee debate is the latest headache for Facebook created by Haugen, 37, who worked on the civic misinformation team for nearly two years before leaving in May. During her time at the company, Haugen amassed a trove of internal Facebook research, which she has since distributed to news outlets, lawmakers and regulators to prove that the social network knew about many of the ill effects it was causing.

Her disclosures have generated a firestorm of criticism, leading Facebook to pause the development of an Instagram service for children. Furthermore, its global head of safety, Antigone Davis, was sharply questioned before Congress. After Haugen revealed her identity, she told Congress that Facebook was deliberately keeping people — including children — hooked to its services. Many lawmakers thanked her for coming forward.

In a statement Sunday, Andy Stone, a Facebook spokesperson, said, “Since so much of what has been reported about Facebook is wrong, we think it’s important to provide our employees the facts.”

Haugen declined to comment on Zuckerberg’s remarks or the internal discussions but said in a statement that she came forward partly because of what she called understaffing of teams that worked on misinformation and protecting elections.

She said her former Facebook colleagues “deserve staffing that reflects the enormous magnitude of the work they are doing.”

Over the years, Facebook’s employees have become increasingly outspoken. In June 2020, for instance, hundreds of workers staged a walkout to protest their bosses’ lack of action on inflammatory posts that former President Donald Trump had published on the site.

Those disagreements, along with questions that Facebook has faced over spreading misinformation and hate speech, have chipped away at the company’s image, which can make it more difficult to recruit new workers.

So when Haugen revealed herself and said Facebook had chosen “profits before safety,” executives swung into action. Over the past week, several corporate vice presidents have held live internal events to provide employees with more information on how different parts of the company operate, according to a memo obtained by The Times.

Executives also distributed a list of talking points, a copy of which was obtained by The Times, so workers knew what to say if friends and family asked them about “recent events.” That list included a denial that Facebook puts profit and growth above people’s safety and how the company has called for regulations from the government.

In Zuckerberg’s regularly scheduled question-and-answer session with employees, which took place Thursday, he defended Facebook and disputed Haugen’s characterizations, according to the recording of the meeting.

“We care deeply about issues like safety and well-being and mental health,” he said at one point. “So when you see press coverage that just misrepresents our work and takes that out of context and then uses that to tell narratives that are false about our motives, it’s really hard and disheartening to see that.”

Between questions about a crippling Facebook outage Monday, when all of the company’s apps became inaccessible globally for more than five hours, and issues surrounding labor certification for foreign employees, Zuckerberg also argued that Facebook spent far more on research and safety than larger companies such as Google, Apple and Microsoft.

Outside of the meeting, employees have had furious debates about Haugen and her claims. Some have argued that Facebook should invite her to speak at a companywide meeting, according to messages viewed by The Times. One said that her testimony was a “wake-up call” for Facebook that felt long overdue.

But other workers questioned Haugen’s motives, her background and her credentials. In one internal message, an employee said Haugen was “clueless.” Some said she lacked technical knowledge.

Some employees also speculated that Haugen was motivated to leak because she was not allowed to work remotely from Puerto Rico, where she had moved during the pandemic.

The discussions became so intense that Facebook’s internal communications department issued a directive last week for workers not to disparage Haugen, according to a memo viewed by The Times.

“We are increasingly hearing about reporter requests to employees to discuss Frances Haugen and people’s sentiments about her,” Andrea Saul, a director of policy communications, said in a memo viewed by The Times. “We have had employees specifically ask if they can defend the company by referencing experiences they had with her. PLEASE DO NOT ENGAGE in these conversations.

“Disparaging her personally is not right, it’s not allowed, and it’s not who we are as a company,” Saul wrote.

Tweets by @forbesindia
Moderna, racing for profits, keeps Covid-19 vaccine out of reach of poor
Transformation of the Steroid Cream Doctor