Is The Indian Economy Overheating?

The question has become inevitable now. If true, we can only pray for a soft landing

An economy can be said to be overheated when overall demand exceeds supply. The demand pushes prices up and in open markets, speculation adds to the pressure. Asset prices are usually a good indication of overheating, but the higher asset prices need not always be demand-driven, especially in the current global situation. 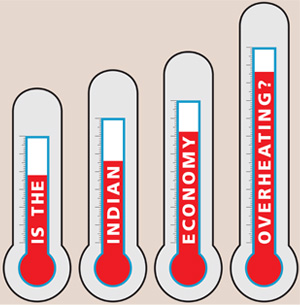 Taking Stock
If one were to go by market indices, which were near record levels in recent weeks, the country’s economy is in the super fast lane. But stock prices may not be reflecting the exact picture, as they are driven by a surfeit of liquidity pumped in by foreign institutional investors. So far, portfolio flows have topped $28.5 billion this year. That is a lot of money chasing the India story. Going by the fact that new investors are scoping for investments in India and the rather bleak scenario elsewhere in the world, the flows are likely to continue. Since corporate profits have increased from the time the Sensex had crossed 21,000 the last time, the market may still have not blown a bubble.

Lay off the Land
Much has been talked about property prices remaining high. Reports from major cities such as Mumbai, Delhi and Bangalore indicate that though the supply has increased many times, prices are yet to soften. Industry insiders say that many builders are artificially propping up prices. The RBI seems to believe that there is some amount of overheating in the market as it clamped down on home loans in its last policy review by capping the amount banks can disburse and increasing the risk weightage on large loans.

Pulling Both Ways
India and many other emerging markets are displaying robust growth mainly driven by domestic demand. Corporate sales in India rose 24 percent year on year in the April-June quarter of 2010-2011, according to an RBI survey. But the index of industrial production fluctuated wildly, causing the central bank to express concerns about a deceleration. The conflicting signals suggest sluggishness in some areas but buoyancy in others. This has also led to many companies delaying capacity expansions. Though, increasing difficulty in land acquisition, rising cost of money and shortage of power would also continue to be a drag on expansions.

What’s Out There
So far, inflation has proven to be very difficult to contain this year. The RBI has repeatedly raised interest rates but prices, especially of food articles, have remained stubbornly high until recently. Though there are some signs of moderation, external factors continue to exert pressure on prices. Global prices of many commodities such as gold and cotton continue to remain high, which reflect in higher prices in India too. Gold, a safe haven currency, has been on a record run as weakness in other markets and political upheavals have been driving investors to the yellow metal. Cotton prices have been high because of disruption of production in Pakistan and some other regions. Whatever the reasons, the external situation has combined with domestic demand to fuel price rise in India.

Bird’s Eye View
Three years ago, when the global economy was booming, India was very much part of the party. Then the rest of the world caught a cold, but India continued to grow after a brief lull. The fast-paced growth led by domestic demand has put pressure on prices and the RBI has responded by raising rates repeatedly, indicating that there are capacity constraints in many industries. However, it also takes comfort from the fact that unlike in 2006-2007 there is a lot of idle capacity in many parts of the world. That means if prices were to get out of hand, there is always room to import from elsewhere.