The New Reality of Gaming

Video games used to be about fighting aliens and rescuing princesses. Not any more 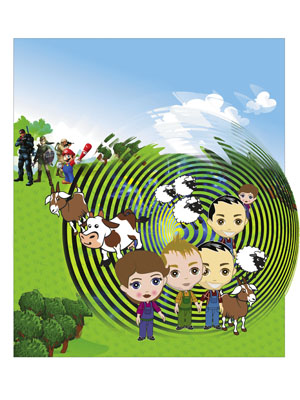 Today’s most popular games have you tilling your farm, hiring waiting staff and devising menus for your restaurant or taking your pets out for walks while maintaining cordial relations with the neighbours. Reality it would seem is the new escapism.

Farming, running a restaurant or keeping a pet are three of the most successful game concepts on social networks like Facebook or smartphone platforms like iPhone and Android. For instance, Farmville is today the most popular game on Facebook with close to 55 million people playing it every month. Its maker, California-based Zynga — all of three years old — is reported to be (privately) worth $5.5 billion. Two of Zynga’s well known peers, Playfish and Playdom, were acquired by Electronic Arts (EA) and Disney over the last year for $400 million and $763 million, respectively.

Clearly, there’s money in social network chore-gaming. But why on earth are people actually doing it?

Who’s Playing
Video games of the pre-social network era were mostly played by boys or young men. Instead, the core audience of social network games are girls and young women, says Alok Kejriwal, founder and CEO of games2win, an online gaming company. The tipping point in the US came in 2008 when women outnumbered men on the Internet. That trend is even more acute on social networks.

Combined with millions of parents and grandparents who’re new to the Internet, the traditional face of the gamer is changing from that of a 25-year-old male to a band stretching from 16 to 40 years comprising men and women in almost equal numbers, says Sebastien de Halleux, one of the co-founders of Playfish, now part of EA. Gaming for this new set of players is less about breathtaking graphics, pulsating sound or edge-of-the-seat action and more about strengthening existing real world relations through frequent casual gaming.

“Social games that have risen to the top are those designed to attract non-gamers, by emphasising the incorporation of your friends into the gaming experience. The idea is that it’s fun playing with people you already know. In fact, in Restaurant City your friends are integral to success — you need to hire them as waiting staff, chefs and janitors, or have them send you ingredients for new dishes,” says de Halleux.

Water Crops, Feed Staff
The success of social games is dependant to a large extent on getting people to come back frequently and play for a short while, says Mia Consalvo, a professor at Ohio University with an extensive research background on the videogame industry. “You should be able to squeeze it into your life,” she says.
Hence, the activities that make up these games are individually trivial, in most cases requiring nothing more than some mouse clicks and a few spare brain cycles, but collectively meaningful. “Think of these games as a sandbox where everybody has the same tools, yet everyone achieves different results. It’s about ‘Look how I run my farm, look how smart and expressive I am’,” says de Halleux.

The activities themselves — planting seeds, harvesting crops, hiring staff, creating new dishes — are reflective of the real world because they create a tangible sense of achievement. They are also designed to tap into social emotions like friendship, love, pride instead of individual emotions like achievement, frustration or fear which were central to many “hardcore” games from earlier.

This behaviour is also more in tune with the new generation of gamers — women. “Unlike men who like to first invest lots of money in a game console and then exploit it, women are more casual and like to do things on a daily basis, like the way they shop for instance. Hence, these game activities also gel with their life psychographic,” says Kejriwal.

Millions of consumers identifiable by name, connect to their friends, spending enormous amounts of time looking at computer and mobile screens. And oh yeah, with a majority being girls and young women.

What about Advertising?
Traditional advertising is dead inside social network games, says Kejriwal. That’s because of the inherent dissonance between people wanting to play without interruption while advertising itself thrives on interruption.

A good example of this was Microsoft’s 2006 acquisition of in-game advertising company, Massive, for a sum reported to be between $200-400 million. In October, Microsoft shut down the business.

Even game companies like Zynga could afford to stay cool towards advertisers because of an alternate revenue stream: Micropayments from millions of players who want to buy virtual game artifacts.

But advertisers are a persistent lot. “They found the weak spot for consumers — everyone wants to buy assets within the games but not every consumer has the wallet power to do that. So advertisers are now saying ‘Watch my ad, take my survey, do enough of them and then I will buy one of these assets for you’,” says Kejriwal.

In other words, SVG, or sponsored virtual goods.

Says Kejriwal, “It’s about time-shifted engagement — you keep coming back because your plots need to be harvested or your menu needs new dishes. There is this lingering sense of incompleteness for consumers because games are almost replicating life. And the gameplay isn’t over because it’s never over.”

Tweets by @forbesindia
I Passed On the Rescue Tank
Mobile Apps In India: Not an Apt Offering