India is not a water poor country, however, the demand for water is increasing every day due to the growing population and inefficient use of water resources 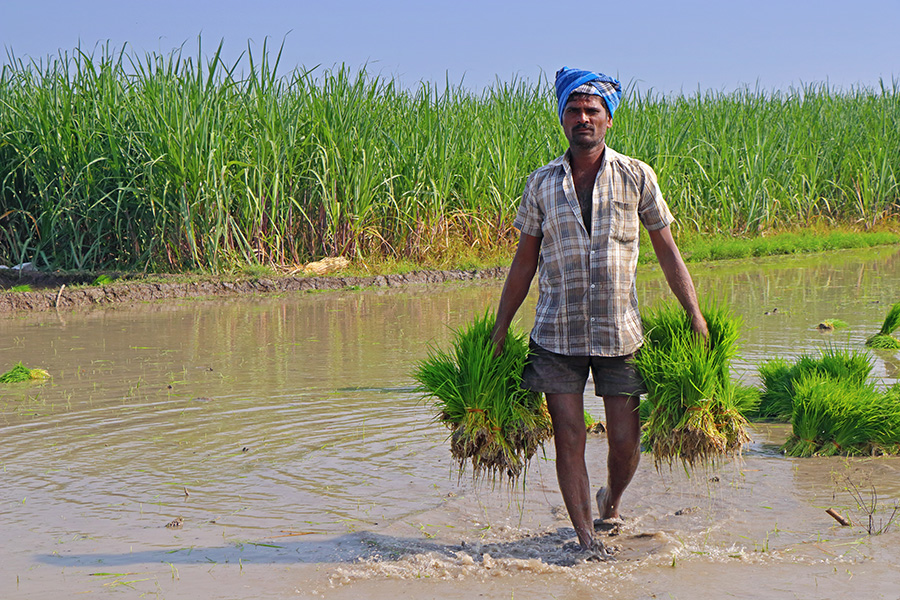 Several scientific studies, have found that the depletion in the water table in Punjab, Haryana and Rajasthan is due to unsustainable irrigation practices in this region
Image: Shutterstock

Even after accounting for land productivity and sugar recovery rate, the ICRIER study shows that, the relatively water abundant states like Bihar and eastern UP should be growing more sugarcane than Maharashtra, Karnataka, Andhra Pradesh and Tamil Nadu, from an irrigation water productivity perspective.

When we heard that the Indian cricketers visiting Cape Town early this year were asked to limit their showers to two minutes, many of us did a double take. It is not that water crisis is a new phenomenon for Indians. India has been classified as water stressed country in terms of per capita freshwater availability for some time now. However, hearing about it in other parts of the world, somehow made it startling. It is time we wake up to the truth close to home, and start taking measures that Cape Town has, if we want to avoid the water wars and imminent deaths due to water scarcity awaiting the Indian states.

‘Day zero’ is fast approaching for many parts of India and in fact many households in India are already living in it. Day zero was a term coined to mark the day when the Cape Town city was expected to run out of water; times when taps in the city would run dry  and people must start queuing up for water to collect it from common collection centres. This is not a new phenomenon for many urban and rural households in India. According to 2011 census, 22.5 million households in India already collect water from outside. The 69th NSSO survey estimates that a member of the household, typically a woman, spends on an average 30 minutes a day travelling and waiting to get water from outside the house , as many parts of India, including metro cities such as Bengaluru, Chennai, and Hyderabad are facing acute water crisis.

India is not a water poor country, however, the demand for water is increasing every day due to the growing population and inefficient use of water resources. For instance, approximately 78% of the fresh water available in the country is used up by agriculture. A closer look at the cropping patterns in the Indian states reveals a frightening inefficiency that is causing most water related problems in India, including depletion of the ground water tables at an alarming rate. According to an ICRIER  study, the water guzzling crops like sugarcane and paddy are grown in states like Maharashtra, Uttar Pradesh (UP) and Punjab, using up lakhs of litres of irrigation water per hectare (see Table 1 for details on sugarcane production). Despite the intensive water requirement, Maharashtra grows 22% of the total sugarcane output in the country, whereas Bihar grows only 4% of the total sugarcane output. In addition, nearly 100% of the sugarcane crop in Maharashtra is grown through irrigated water, while parts of the state are already facing severe water crisis. In fact, the state had to supply drinking water to Marathwada region (where 22% of state’s sugarcane is grown) using a 50 wagon train during the summer of 2016 . Even after accounting for land productivity and sugar recovery rate, the ICRIER study shows that, the relatively water abundant states like Bihar and eastern UP should be growing more sugarcane than Maharashtra, Karnataka, Andhra Pradesh and Tamil Nadu, from an irrigation water productivity perspective. 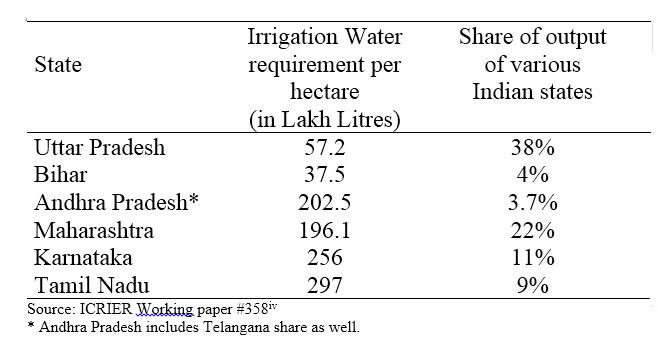 A similar story emerges when one looks at the other water guzzling crop, paddy. Punjab, which is the third largest producer of rice in India, grows paddy using nearly 100% irrigation cover. As a result, while Punjab tops the table in land productivity, it uses more than three times the water than Bihar and more than twice the amount of water than West Bengal, to produce one kg of rice. What is more alarming is that 80% of the water used for irrigating the paddy fields in Punjab is drawn from groundwater source. It is no wonder then, 76% of administrative blocks in Punjab face over-exploited groundwater situation. On the other hand, states like Assam, West Bengal, Bihar and Orissa, which have plenty of rainfall and are better placed to grow these water intensive crops, do not have sufficient incentives for farmers to grow these crops due to procurement and other market related inefficiencies.

Robust procurement policy in Punjab combined with highly subsidized power, results in high profitability of paddy cultivation. Whereas, West Bengal and Bihar, which have plenty of rainfall and require much less groundwater for irrigation, lack such incentives. Likewise, due to assured marketing through sugar mills, the sugarcane farmers in Maharashtra are reluctant to shift to other crops, despite the low water productivity. Similarly, adoption of HYV (high yielding variety) seeds, adequate irrigation infrastructure and high procurement rate by Food Corporation of India (FCI), led to paddy cultivation in traditionally maize growing states like Punjab. HYV gives higher yield but at the cost of intensive irrigation, leading to increased groundwater depletion in Punjab’s water table. Several scientific studies, including one in Nature   have found that the depletion in the water table in Punjab, Haryana and Rajasthan is due to unsustainable irrigation practices in this region. The Nature study, published in the year 2009, clearly warned that, if counter measures are not taken soon, this region would not only face severe shortage of drinking water, but the agricultural yields would also reduce, which could lead to extensive socio economic stresses. The evidence so far is in line with this prediction. Along with potable water shortage and water pollution, the agricultural yield growth in Punjab, once the top performing state, has reduced significantly in recent years, causing a variety of problems in the state.

Lack of sufficient investments in the infrastructure for canals and reservoirs, inefficient management of surface and rain water, combined with misaligned input subsidies can cause heavy usage of groundwater for agriculture purposes, as seen in the states of Punjab and Haryana. Unplanned urbanization in turn contributes to minimal recharge of groundwater. As India approaches its own Day zero, we need to look for both short term as well as long term solutions to stall this water crisis and become sustainable in the longer run. Age old method of flood irrigation should be substituted by alternate methods such as sprinkler and drip irrigation. Replacing HYV seeds with traditional variety that require lower levels of water and can withstand dry spells; going back to traditional and eco-friendly methods of farming that require less water; and switching to less water intensive crops in dry areas, are a few short-term solutions to reduce water consumption in agriculture. However, unless the state governments start charging for electricity and water, farmers will not have incentives to adopt sustainable practices.

With existing skewed water distributions, there is an urgent need for both central and state governments to take a relook at the minimum support prices, input subsidies, procurement policies, downstream demand and market access related aspects, and recalibrate the misaligned cropping patterns across the states. For instance, state governments should encourage cultivation of less water consuming crops like maize, pulses, and oilseeds in water stressed regions and water guzzler crops in water rich areas. Also, there should be export tariffs and bans on water guzzler crops like paddy and sugar. We need to recognize the fact that for every kg of sugar and rice we export, we are exporting thousands of litres of water for free. Note that, paddy and sugarcane together constitute 1/4th of gross cropped area, but utilize over 60% of total irrigation water supplied to agriculture in India. This means, most other crops are water deprived, which reduces their productivity. This misalignment in cropping pattern and water allocation is also one of the reasons for lower productivity of agriculture in India, compared to countries like China.

While these are politically sensitive matters, it is high time that the state governments start coordinating with each other and plan for an optimal cropping  pattern across various agro-climatic regions of India, from a water productivity perspective. In addition, measures to improve groundwater levels, such as rainwater harvesting and artificial groundwater recharge should be taken up in states like Rajasthan, Haryana and Punjab at war footing, as well as in rest of India. Note that, nearly 65% of the rainwater in India is not harvested and runs off into the sea, creating soil erosion on its way. Farm ponds, percolation tanks, water reservoirs and dams can help retain more surface water and increase groundwater recharge .

India also needs to learn and adopt the water conservation practices from other countries. According to NABARD-ICRIERiii report, Israeli government accounts for every drop of water use by pricing the water appropriately to reflect the scarcity of the resource; China’s ‘sponge city’ project aims at recycling 70% of rainwater through greater soil permeation, retention, storage, water purification and restoration of adjacent wetlands .

Several researchers are ringing the alarm bells by providing insights into the root causes of water crisis and are offering credible solutions. This needs to be perceived as a wake-up call for policy makers, to respond to the imminent water crisis in the country. We, the residents of India are equally responsible, and learn to account for every drop of water, if we want to leave our future generations sufficient water to lead a decent life.

About the authors:
Professor Haritha Saranga is a Professor of Production & Operations Management at IIM Bangalore. Haritha’s research is focused primarily on understanding the factors influencing the quality, productivity and sustainability aspects of firms operating in agriculture, automotive and healthcare supply chains in India and abroad.