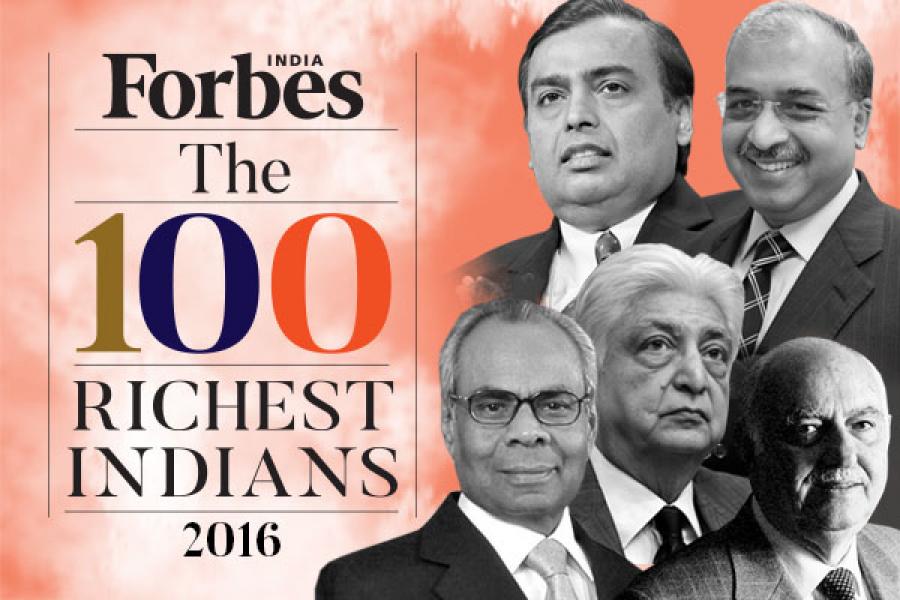 Reliance Industries Ltd (RIL) chairman Mukesh Ambani has topped Forbes’s annual list of India’s 100 richest tycoons with a net worth of $22.7 billion. The combined net worth of India’s 100 wealthiest is $381 billion, a rise of 10 percent from $345 billion in 2015.

Naazneen Karmali, India Editor of Forbes Asia, said: “In a post-Brexit world, India appears a steady ship with an economy growing at 7 percent-plus. The majority of India’s 100 richest have notched up handsome gains as their companies have outperformed the stock market in the past year. As the domestic investment cycle starts kicking in, we can expect more gains and new names in the future.”

Ambani, who retains his number one spot for the ninth consecutive year, saw his wealth increase from $18.9 billion last year as shares of Reliance Industries rose by 21 percent in the past 12 months. The oil-to-retail conglomerate launched its 4G phone service, Jio, this September.

India’s richest pharmaceutical magnate, Dilip Shanghvi, remains at No 2 with a net worth of $16.9 billion. His wealth fell by $1.1 billion along with a drop in the shares of his Sun Pharmaceutical Industries, the world’s fifth-largest generics maker. Earlier this year, Sun Pharma acquired 14 drugs from Novartis in Japan for $293 million, which will be distributed by Mitsubishi Tanabe Pharma.

Taking the third spot are the Hinduja brothers with a net worth of $15.2 billion, up from $14.8 billion last year. The four siblings – Srichand, Gopichand, Prakash, and Ashok – control multinational empire Hinduja Group, with businesses ranging from trucks and lubricants to banking and cable television. The group commissioned its much-delayed 1,040 megawatt thermal power unit in South India in July.

Tech magnate Azim Premji, who has led Wipro for five decades, slips one spot to No 4 on the list with a net worth of $15 billion. Wipro, India’s third largest outsourcer, reported a 6 percent fall in net earnings to $304 million in a recent quarter amid sluggish sales. To boost growth, the company has been on a buying spree and its most recent acquisition was HealthPlan Services, an insurance-technology firm based in Florida.

Fortunes of cement and paint tycoons benefited from the government’s infrastructure push and housing-for-all policy. Benu Gopal Bangur (No 14) features in the top 20 for the first time with a net worth of $5.9 billion, as shares of his Shree Cement soared. The cement maker reported a surge in sales and lower energy costs due to a fall in coal prices. Ashwin Dani (No 34, $3.3 billion) added $1.1 billion to his wealth as the shares of Asian Paints, where he is non-executive vice chairman, got a boost when it reported double-digit growth in quarterly revenue and net profit. Both Bangur and Dani were among the 15 people who added more than $1 billion to their wealth.

Sourav Majumdar, Editor, Forbes India, said: “This year’s list sees a rise in the overall wealth of the country’s top 100 billionaires, in line with the movement of the markets. While the composition at the top of the list remains largely unchanged, the distribution of wealth within the list continues, with the top 20 now contributing 52 percent of the total, down from 55 percent last year.”

Eight people rejoin the ranks after their companies outperformed the stock market’s 12 percent rise in the past year. One notable returnee is biotech pioneer and India’s richest self-made woman Kiran Mazumdar-Shaw (No 65, $1.83 billion). Shares of her listed firm Biocon, Asia’s largest insulin producer, more than doubled in the past year. Shares of its contract research affiliate Syngene are also up by 92 percent since its IPO last year.

The six newcomers to the list include serial entrepreneurs and brothers Bhavin and Divyank Turakhia (No 95, $1.3 billion), who make the ranks after selling their ad tech firm Media.net for $900 million to a consortium of Chinese investors in August. Acharya Balkrishna (No 48, $2.5 billion) also makes his debut on the list thanks to his 97 percent holding in fast-growing consumer goods outfit Patanjali Ayurved, which he co-founded with yoga guru Baba Ramdev.

Another new face is Pawan Munjal (No 29, $3.65 billion), son of the late Brijmohan Lall Munjal, founder of Hero Group, who takes over his father’s spot on the list. The motorcycle magnate runs the flagship Hero MotoCorp, which is the world’s largest producer of two-wheelers by volume. The company has sold 65 million units to date, of which more than 6.6 million were sold in the year ended March 2016.
The minimum amount required to make the list was $1.25 billion, up from $1.1 billion in 2015. There were 13 drop-offs from the list last year, including textile figure Balkrishan Goenka and co-founders of Flipkart, Sachin Bansal and Binny Bansal.

This list was compiled using shareholding and financial information obtained from the families and individuals, stock exchanges, analysts and India’s regulatory agencies. The ranking lists family fortunes, including those shared among extended families such as the Godrej and Bajaj families. Public fortunes were calculated based on stock prices and exchange rates as of September 9. Private companies were valued based on similar companies that are publicly traded.

The list and its detailed analysis can also be found in the October issue of Forbes Asia and in the Forbes India issue, which will be available on newsstands from October 21.