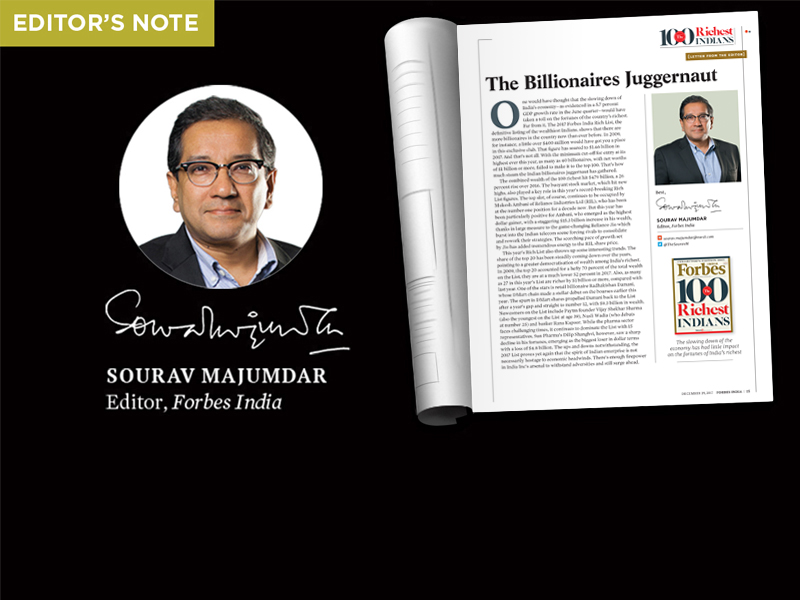 One would have thought that the slowing down of India’s economy—as evidenced in a 5.7 percent GDP growth rate in the June quarter—would have taken a toll on the fortunes of the country’s richest. Far from it. The 2017 Forbes India Rich List, the definitive listing of the wealthiest Indians, shows that there are more billionaires in the country now than ever before. In 2009, for instance, a little over $400 million would have got you a place in this exclusive club. That figure has soared to $1.46 billion in 2017. And that’s not all. With the minimum cut-off for entry at its highest ever this year, as many as 40 billionaires, with net worths of $1 billion or more, failed to make it to the top 100. That’s how much steam the Indian billionaires juggernaut has gathered.

The combined wealth of the 100 richest hit $479 billion, a 26 percent rise over 2016. The buoyant stock market, which hit new highs, also played a key role in this year’s record-breaking Rich List figures. The top slot, of course, continues to be occupied by Mukesh Ambani of Reliance Industries Ltd (RIL), who has been at the number one position for a decade now. But this year has been particularly positive for Ambani, who emerged as the highest dollar gainer, with a staggering $15.3 billion increase in his wealth, thanks in large measure to the game-changing Reliance Jio which burst into the Indian telecom scene forcing rivals to consolidate and rework their strategies. The scorching pace of growth set by Jio has added tremendous energy to the RIL share price.

This year’s Rich List also throws up some interesting trends. The share of the top 20 has been steadily coming down over the years, pointing to a greater democratisation of wealth among India’s richest. In 2009, the top 20 accounted for a hefty 70 percent of the total wealth on the List; they are at a much lower 52 percent in 2017. Also, as many as 27 in this year’s List are richer by $1 billion or more, compared with last year. One of the stars is retail billionaire Radhakishan Damani, whose DMart chain made a stellar debut on the bourses earlier this year. The spurt in DMart shares propelled Damani back to the List after a year’s gap and straight to number 12, with $9.3 billion in wealth. Newcomers on the List include Paytm founder Vijay Shekhar Sharma (also the youngest on the List at age 39), Nusli Wadia (who debuts at number 25) and banker Rana Kapoor. While the pharma sector faces challenging times, it continues to dominate the List with 15 representatives. Sun Pharma’s Dilip Shanghvi, however, saw a sharp decline in his fortunes, emerging as the biggest loser in dollar terms with a loss of $4.8 billion. The ups and downs notwithstanding, the 2017 List proves yet again that the spirit of Indian enterprise is not necessarily hostage to economic headwinds. There’s enough firepower in India Inc’s arsenal to withstand adversities and still surge ahead.

Tweets by @forbesindia
Tech makeovers for your home
To scale business, startups need to have security-first approach