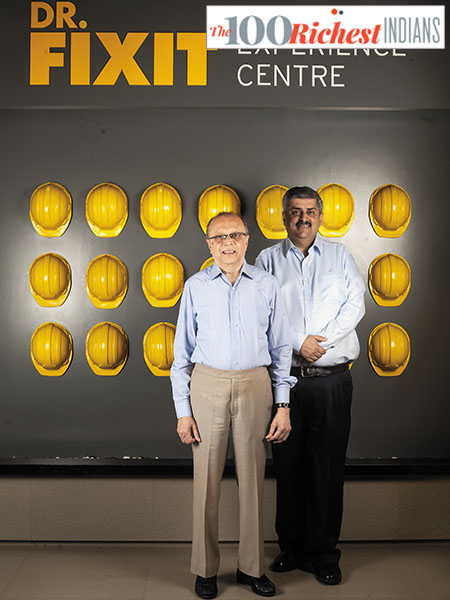 A colourful canopy rises over the Pidilite headquarters in suburban Mumbai. Staff members in traditional dresses hustle about making last-minute arrangements. The atmosphere is palpably festive. “We have our Dussehra celebration today,” smiles Bharat Puri, managing director of the adhesive and industrial chemicals maker, who took over daily operations from chairman Madhukar Parekh in early 2015. “It’s a nice way to bring people together,” he says, gesturing his stocky palms towards each other.

Creating such bonds is what Pidilite does best. What began as a B2B industrial products company set up by Parekh’s late father Balvant in 1959, morphed into a consumer-oriented company on the back of clever advertising in the ’80s and ’90s led by the junior Parekh. The result: Fevicol, its flagship brand, has become synonymous with glue. Consider Prime Minister Narendra Modi’s remark during his visit to Japan shortly after taking office: “The bond we share is stronger than that of Fevicol,” he announced while wrapping up his five-day visit. Lower down the rung, Mohammed Qureshi, an independent civil works contractor who uses Pidilite’s products, echoes the sentiment, “When you tell customers you can stick things with gum versus doing the same with Fevicol, it makes a huge difference. The name inspires trust.”

As the best-selling adhesive in the country, Fevicol commands over 70 percent market share in the white glue segment, and makes up around 40 percent of Pidilite’s ₹5,354 crore revenues. Parekh, who along with his family holds a 70 percent stake in the BSE-listed company, has seen his fortune rise by $1 billion in the past year to hit $5.75 billion (rank 19 on the 2018 Forbes India Rich List, up from 28 last year), boosted by a 32 percent rise in Pidilite’s stock price in the 12 months ended March 2018.

“My father had a clear vision that we should only work in areas where we can pioneer a business segment,” says the understated 72-year-old. True to that principle, Balvant hatched the technology to manufacture pigment emulsions—Pidilite’s first product—through painstaking trial and error in the late ’50s. Used in textile printing, these emulsions were entirely imported into India at the time, prompting the patriarch to make a cheaper, indigenous version to serve this ready market. A few years later, Balvant spotted another opportunity to make synthetic glue to replace the vegetable and animal-derived alternatives that carpenters were using at the time. Thus was born Fevicol.

The inventiveness didn’t stop at the product level. It spilled over into marketing as well. Since white glue was “virtually unknown” to carpenters, Parekh recalls how his father devised a below-the-line market activation plan to reach out to and raise awareness among carpenters across the country. Later, in the early ’70s, he launched a quarterly magazine Fevicol Design Ideas for this community of carpenters showcasing furniture designs that they could copy for their customers. Says Parekh, “This greatly contributed to popularising the Fevicol brand.” And also cemented Pidilite’s bond with its key customers—carpenters, contractors and labourers. Today, too, several thousand copies of the magazine are printed annually; it is available digitally as well. 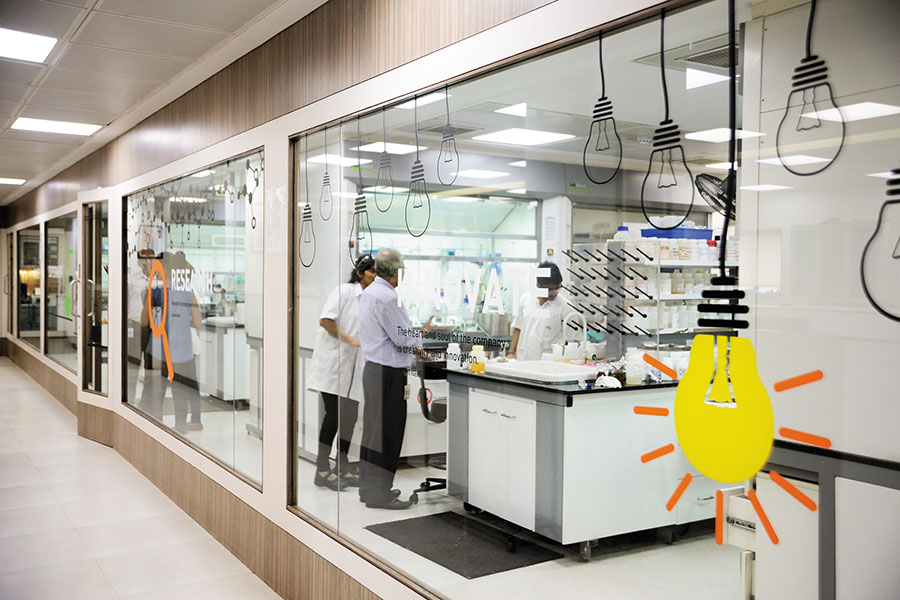 Parekh entered the business in 1972, aged 26, after studying chemical engineering at the University of Wisconsin and a two-year stint at Abbott Labs. At the time, Pidilite was a small ₹1 crore-in-revenue outfit, focussed on the B2B segment. Parekh sought to supersize the company, but to do so, he realised the need to tap into wider markets, especially the end consumer.

Extensive marketing efforts followed in the late ’70s and ’80s to transform Pidilite’s “products” into “brands”. Ogilvy & Mather (O&M), which was already producing the company’s trade advertisements, was given the mandate. Piyush Pandey, who was then a copy chief for Indian languages at the ad agency, recalls how his seniors palmed off the work to him. “They said, ‘Yeh le, yeh bakwaas hai’ (It’s rubbish),” he chuckles. “They didn’t realise it was the biggest lottery ticket.”

From his first “Dum laga ke haisha” jingle, which became an instant hit and took Fevicol to the masses, to the many memorable commercials that followed, including one of a hen laying an unbreakable egg after being fed from a can of Fevicol, Pandey recalls the journey as “fabulous”. “It’s all thanks to Madhukar bhai’s vision. He allows innovative ideas to flourish and is always one step ahead of the market,” says the veteran ad man who now serves as executive chairman and creative director, India and South Asia, O&M.

That spirit of inventiveness, which Parekh says he inherited from his father, streamed into all aspects of the organisation—from product and packaging to marketing and sales. Take the case of Fevikwik. The super glue was initially sold in aluminum tubes at a ₹20 price point. However, the contents of the tube would often gel up after one or two uses. So Pidilite launched a ₹5 pack which consumers could discard after a couple of uses. “It offered them value for money,” says Parekh.

Today, executives are encouraged to tap into that spirit through a “culture of immersion”, says Sanjeev Aga, former CEO of Idea Cellular who sits on Pidilite’s board. Staff are required to think about products and markets deeply, he explains. “From that immersion emerges clarity. And from clarity emerge opportunities to do things better, and often to do them differently. Without trying to be innovative, Pidilite ends up innovating. That is the magic of culture.”

After cementing Pidilite’s position in the domestic market, Parekh went on to make a series of overseas acquisitions in the mid-2000s. The company now has 17 foreign subsidiaries with manufacturing facilities in the US, Thailand, Dubai, Brazil, Egypt, Singapore and Bangladesh. Overseas revenues contribute about 10 percent to total sales; that figure is likely to increase as Pidilite targets South Asian countries that are similar to India in terms of demographics and income.

“Pidilite’s strength lies in spotting unserved or underserved markets and then creating brands to plug those gaps,” explains Puri, who came to Pidilite from snacks giant Mondelez International where he served as president-global chocolate, gum and candy categories. Prior to his appointment as the company’s first non-family managing director (Parekh’s two daughters and his brother Ajay’s two daughters have stayed away from any formal association with Pidilite), Puri served on Pidilite’s board for seven years. “I was the perfect insider outsider,” he says, adding that his job was to take Pidilite—“already a great company”—to the next level by making it “future ready”.

To that extent, Puri is betting on “untapped, high-growth” areas such as waterproofing, wood finishes and floor coatings. While Pidilite’s “core business” of adhesives and sealants, which includes brands like Fevicol, Fevikwik and M-Seal, will continue to grow through better sales and distribution, and rural penetration in particular, this “growth business” category requires brand creation and consumer education, he says. Take the case of waterproofing. Globally, for every six houses that are painted, one undergoes complete waterproofing. In India, the ratio is 20:1. “We’re competing against non-consumption,” says Puri. Two years ago, in a first of its kind move, Pidilite roped in a celebrity—none other than superstar Amitabh Bachchan—to endorse its Dr Fixit range of waterproofing products.

Then there’s the “pioneer business” category, which includes small, underserved markets that will be tomorrow’s growth categories. At present, around 65 percent of Pidilite’s revenues come from the core business, while the remaining come from the growth and pioneer categories. Says Puri, “As long as we have our cylinders firing in these three segments, we’re in a good place.”

Amnish Aggarwal, head of research at brokerage Prabhudas Lilladher, agrees. After a tepid first quarter in FY18, Pidilite posted four consecutive quarters of double-digit volume-led sales growth, even as Ebitda margins came under pressure due to higher raw material costs. “This shows the strength of Pidilite’s brands and business model,” he says.

Over the last three months, vinyl acetate monomer (VAM) prices, a derivative of crude oil that accounts for 60 percent of Pidilite’s input costs, have corrected, says Aggarwal, but the depreciating rupee offsets any benefit as most of Pidilite’s VAM requirements are met via imports. To prevent further margin erosion, Pidilite has increased prices of select categories by 3-5 percent. Short term worries aside, over the long term, Aggarwal is upbeat. Waterproofing, wood finishes and floor coatings where Pidilite is sustaining investments will be “key growth drivers in the coming years”, he predicts. In the last fiscal itself, Pidilite snapped up floor coating specialist CIPY Poly Urethanes and entered into a partnership with German industrial adhesive maker Jowat.

And while competition from global majors such as America’s Huntsman, Germany’s Hoechst, and Henkel, as well as local players like adhesive makers Astral Poly Technik and Jubilant Industries, or Asian Paints and Berger Paints that are expanding into waterproofing, is stiff, Aggarwal argues that Pidilite’s brand equity, stemming from mother brand Fevicol, as well as its distribution might are “unbeatable” moats. Puri welcomes competition, “With more players, the market grows and everyone benefits.”

As he focuses on emerging businesses and putting in place world class systems and processes, Puri is mindful of not crushing Pidilite’s innate entrepreneurial spirit. “We’re building a pro-neurial culture where we have the best of both worlds,” he says. That’ll keep Pidilite barreling ahead in the years to come.

Tweets by @forbesindia
Podcasts: The 100 Richest Indians 2018
Yusuff Ali: A mentor to his sons-in-law