The Patels of Cadila are betting big in the high-risk, high-return arena of new drug discovery, but they are hedging it with a presence across the pharma value chain 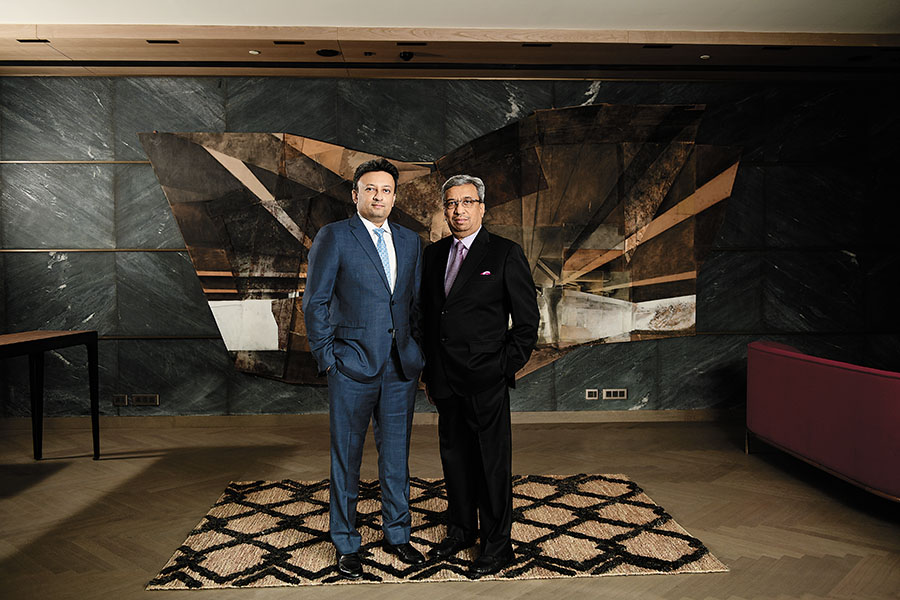 The late Ramanbhai Patel knew a thing or two about buzzwords that are now must-haves in every startup founder’s lexicon: Innovation and disruption. At a time when nobody called a mint-new business a startup and disruption mostly indicated a disturbance, Ramanbhai set up Cadila Laboratories with friend Indravadan Modi. The year was 1952, Patel was in his 20s, and had just chucked his job as a professor at the LM College of Pharmacy in Ahmedabad.

Cadila today has Ramanbhai’s son Pankaj as chairman and grandson Sharvil as managing director (the patriarch passed away in 2001). Cadila Laboratories—the entity that was once set up by Patel and Modi—was restructured. This led to the formation of Cadila Pharma and Cadila Healthcare; the former was taken over by the Modis and latter, under the aegis of Zydus group, came to the Patels.

Sharvil, the 40-year-old third-gen scion, points out that his grandfather’s aim was to make drugs locally, thereby improving access and affordability. And that called for innovation. At a time when people in India were dying of pernicious anaemia, Ramanbhai identified the unmet need and, after research and development, launched Livirubra.

“Ultimately the pharmaceutical business is a business of science. And without innovation, no [pharma] business can survive,” says Pankaj, now 66. Adds Sharvil, “Research was in his [Ramanbhai’s] heart. And that has consciously or subconsciously always influenced me.”

Innovation in 2019 means several things for Cadila, starting with the high-risk, high-return arena of drug discovery, or new chemical and biological entities (NCEs and NBEs, in industry parlance). It’s a gambit most top-tier Indian companies have had a go at but with minimal results. The furthest drugmakers like Glenmark and Ranbaxy have traversed is a mid-stage in the multi-phase journey before outlicencing the molecule to a Big Pharma giant for a generous fee. But none of those molecules made it to market.

Cadila is hoping to go where no Indian pharma company has before. In 2013, Zydus Cadila, the pharma giant, took a step in that direction by introducing Lipaglyn in India to treat hypertriglyceridemia and diabetic dyslipidemia in patients with Type 2 diabetes not controlled by statins. But approval from the US Food & Drug Administration (FDA) is still a gleam in the Patels’ eyes.

Lipagyln (Saroglitazar) is perhaps Cadila’s biggest and best bet in the NCE space. It is currently undergoing Phase II clinical trials in the US for three indications: Severe hypertriglyceridemia, non-alcoholic steato hepatitis and primary biliary cholangitis (PBC). The molecule is also undergoing Phase III clinical trials in India for three indications. “I am highly optimistic about Lipaglyn, I think we have tremendous opportunity in this space. We could be among the very few companies to have launched a molecule in this $25 billion market,” says Sharvil.

Amey Chalke, an equity analyst at HDFC Securities, has been closely monitoring Cadila’s progress on the NCE front. “Phase II data is expected in December; if it is positive, there would be a significant reaction because it is a billion-dollar opportunity for them. In the US, diabetes is a huge market, with not as much competition as there is in oncology, for instance.” Depending on the Phase II data, adds Chalke, Cadila will have to decide if it wants to out-license the molecule or whether it would like to go ahead with listing that entity in the US. The latter would be a first for Indian pharma.

Cadila today is an integrated entity with operations across the pharma value chain, from active pharma ingredients, formulations, and contract research, to vaccines, biosimilars and wellness products. But it’s the NCE research that promises to transform the company. “To get to the next level of growth and profits, we need to take riskier bets,” says Sharvil. One good reason to break out from the pack is that Indian pharma has been at the receiving end of a barrage of warnings from the US FDA for, among other reasons, violating cGMP. That may explain why most pharma promoters have seen an erosion in their net worth. Pankaj Patel’s is down to $2.8 billion from $4.4 billion a year ago, dragging him down to 18 places to No 46 on the 2019 Forbes India Rich List. 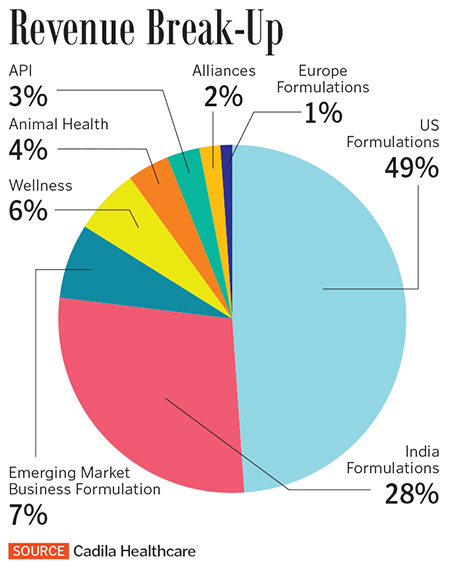 But why are the Patels so hopeful in an area where everybody, from drug discovery pioneer Dr Reddy’s to Ranbaxy to Wockhardt, had come a cropper? Sharvil explains, “We didn’t go by the dynamics of the market or emotions, we went by data. And our data showed different results: It was a safe molecule. And so we continued to pursue it.” That doesn’t mean the Patels are averse to killing projects that aren’t making headway. While he wouldn’t disclose any of them, he says, “Our objectivity when it comes to research is very strong, and that helps us do more projects,” adds Sharvil.

NCEs may be the biggest bet for the Patels—they’ve invested about 7-8 percent of their turnover in the segment since 1995—but they are not the only one. In January 2019, Sharvil was at the forefront of the ₹4,595 crore acquisition of the Heinz India portfolio that comprises Nycil, Glucon-D, Complan and Sampriti Ghee. These fit well into the consumer wellness portfolio that has grown organically with brands like Sugar-Free, EverYuth (skincare) and Nutralite (a butter substitute).

Sharvil stresses on the scope for innovation in this business, too. “We realised we could innovate with these products and grow them further. All these brands have a strong doctors’ connect.” That connect was on display when GlaxoSmithKline owned the brands. “When these brands were sold to Heinz, they didn’t do anything pharma related. So, we feel there is still enough space for us to grow,” says Sharvil.

Says Deepak Mallik, senior vice president at Edelweiss Financial Services, “Given the track record of the company they will do justice with this portfolio because they have a good distribution reach. Secondly, doctor-led promotion can boost the growth in this portfolio. They have this advantage as opposed to the other players.” 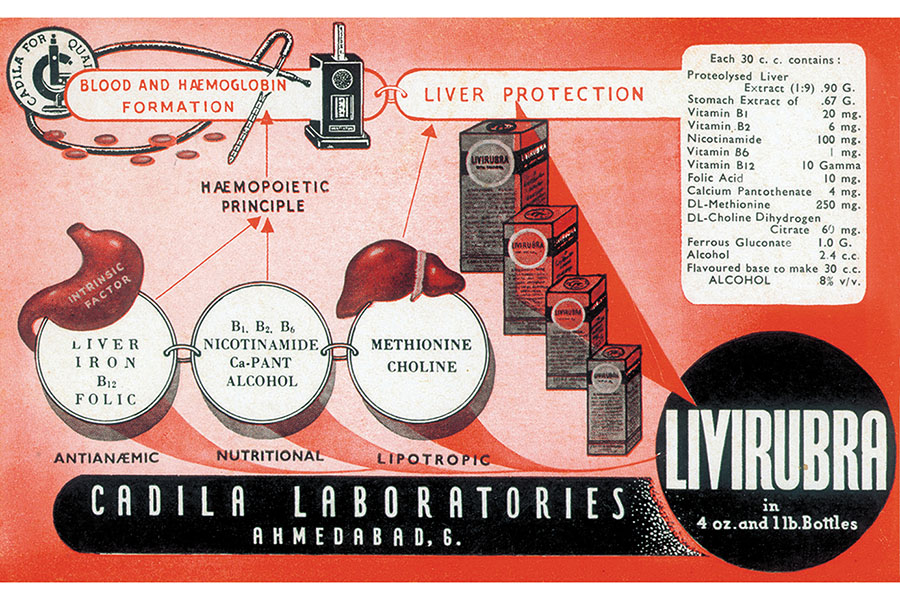 Although Nycil and Glucon-D are market leaders in their respective segments, Complan is at No. 6 in the malt drinks category in India. Sharvil explains that the recall value of the brand is much higher than its actual sales, presenting an opportunity to narrow the gap. “Our plan is to turn around Complan in the coming year.” At present, Zydus Wellness contributes to about 6 percent of the company’s turnover, with sales of some ₹80 crore.

Sharvil also sees immense business potential in the areas of biologics and vaccines. In biologics, there has been demand from therapeutic areas such as oncology, autoimmune diseases and infectious diseases, among others. Currently, the company’s biologics pipeline comprises six novel biologics (still in the development stage) and 21 biosimilars, some of which have already been launched.

The biggest challenge for Indian pharma today is compliance with US FDA regulations. According to reports, Indian pharma companies accounted for almost one-third of the total foreign inspections by the US FDA between October 2018 and June 2019. Cadila Healthcare has also come under the scanner. Earlier this year, the US FDA issued Form 483 (issued to the management after an inspection reveals violations of the Federal Food, Drug, and Cosmetic Act) with 14 observations regarding its Moraiya (Ahmedabad) facility. They said there were some cGMP issues. In November, Cadila Healthcare received a warning letter from the USFDA for its Moraiya formulation facility. Cadila had a similar issue with the same facility in December 2015, which was resolved in February 2017. 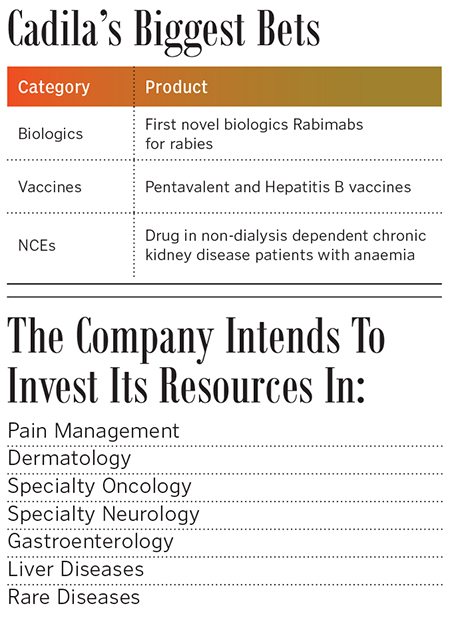 Pankaj Patel’s zest for entrepreneurship and passion for his father’s business was evident since he was a child. After completing his training in pharmacy, Patel joined Cadila Laboratories, when it was a ₹4 crore business. The tough part was what came next, in 1995: The demerger to form Cadila Pharmaceuticals, run by the Modis, and Cadila Healthcare. “The challenge was starting all over again. I was at the helm of a business, which was much larger and now suddenly it was half,” explains the chairman. He recalls the tough times. “The financial market was ruthless. Every bank I went to rejected me. So I had no option, but to sell all my family assets to generate resources to grow the business.” At the time, Pankaj had one target, which he eventually achieved: To grow the company to ₹1,000 crore by 2000.

Sharvil joined Cadila Healthcare in 2007, after earning a doctorate from the University of Sunderland in the UK for his research on breast cancer at John Hopkins Bayview Medical Center in the US. When he joined as deputy managing director, he coined the concept of “Healthy Billion”, to achieve a billion-dollar target by FY11. “We were working till the very last hour to achieve the numbers and eventually we got through. My focus was on two things: To drive execution on the numbers that had to be achieved and scale up the other initiatives that we had, like biologics and vaccines.”

The chairman, meantime, is as focussed on philanthropy as he is on growing the company. According to the EdelGive Hurun India Philanthropy List 2019, he has set aside ₹20 crore of his wealth for it. The family has set up two medical colleges in Gujarat and a hospital in Dahod, apart from a number of schools. “Wealth is the means, but it’s not the goal,” says Patel.

Tweets by @forbesindia
Freelancers, Bon Credit could fix your financial struggles
Twitter struggles to define what ads are 'political'