A weaker rupee impacted the majority of the richest but that was offset by Gautam Adani's record gain, which made him the new No 1 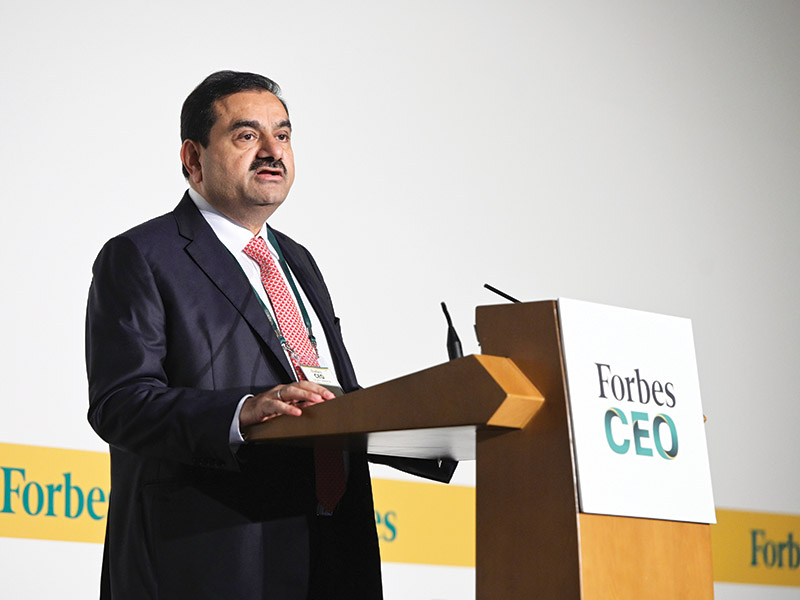 Infrastructure tycoon Gautam Adani, which changed the pecking order at the top for the first time since 2008. After nearly tripling his wealth in 2021, Adani doubled his fortune this year to $150 billion to become the new No 1—and also, for a while, the second richest person on the planet Image: Forbes Asia

India’s post-pandemic demand revival powered its economy to become the fifth-largest in the world, surpassing the UK. But the stock market was down marginally from a year ago with the biggest dampener being a weaker rupee, which fell by 10 percent over the same period. Despite this, the combined wealth of India’s 100 richest grew by $25 billion to touch $800 billion.

The gain was largely due to a record-breaking feat by infrastructure tycoon Gautam Adani, which changed the pecking order at the top for the first time since 2008. After nearly tripling his wealth in 2021, Adani doubled his fortune this year to $150 billion to become the new No 1—and also, for a while, the second richest person on the planet. The biggest gainer this year in both percentage and dollar terms, Adani announced he would be investing $100 billion over the next decade, 70 percent of it in green energy.

Mukesh Ambani, who controls Reliance Industries [owner of Network 18, the publisher of Forbes India], the oil and gas to telecom giant, is at No 2 with $88 billion, down 5 percent from last year. Between them, Adani and Ambani now account for 30 percent of the total wealth of India’s 100 richest.

The country’s retailing king, Radhakishan Damani, who owns the DMart chain of supermarkets, broke into the top three for the first time though his net worth declined by 6 percent to $27.6 billion. Another year of bumper profits from Covid-19 vaccines pushed up vaccine baron Cyrus Poonawalla to fourth place with a fortune of $21.5 billion.

Three prominent list members passed away this year: Rahul Bajaj, the ailing patriarch of the Bajaj family; Rakesh Jhunjhunwala, often referred to as India’s Warren Buffet, who died after launching his new airline Akasa Air in August and whose wife, Rekha, takes his place; and construction magnate Pallonji Mistry, whose 54-year-old son Cyrus Mistry died in a car crash in September leaving the patriarch’s older son Shapoor Mistry at the helm of the family’s $14.2 billion fortune.

Among the four returnees is Anand Mahindra, whose Mahindra & Mahindra created a buzz by launching an electric SUV. The gainers were outnumbered by the majority—60 in all—who saw their wealth decline from a year ago.

Notable among the drop-offs was Vijay Shekhar Sharma, who saw shares of his One97 Communications, the parent company of fintech Paytm, fall amid the global tech rout. The cutoff for the top 100 was $1.9 billion, almost the same as last year’s $1.94 billion.

This list was compiled using shareholding and financial information obtained from the families and individuals, stock exchanges, analysts and India’s regulatory agencies. The ranking lists family fortunes, including those shared among extended families such as the Bajaj and Godrej families. Public fortunes were calculated based on stock prices and exchange rates as of September 23. Private companies were valued based on similar companies that are publicly traded. The list can also include foreign citizens with business, residential or other ties to the country, or citizens who don’t reside in the country but have significant business or other ties to the country. The editors reserve the right to amend any information or remove any listees in light of new information