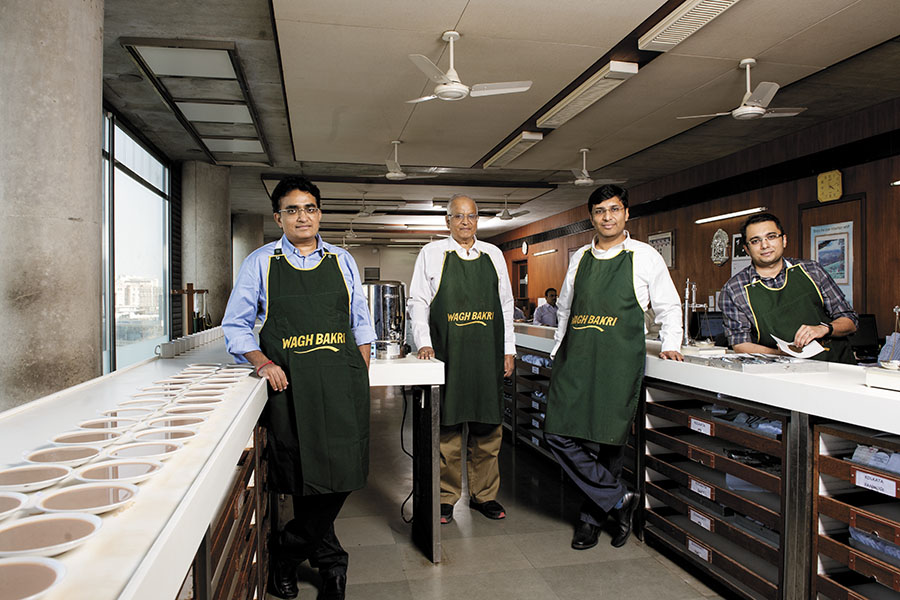 "Our tea is packed only after the directors have tasted every sample, based on their colour, strength, taste and briskness,” says Parag Desai, executive director, Gujarat Tea Processors & Packers Ltd (GTPPL), as he runs his fingers through processed tea leaves, like a jeweller caresses his finest pearls.

We are at the Tea Tasting Department of the company’s headquarters in Ahmedabad. About 50 saucers of milky tea are neatly arranged on a counter. On a parallel counter, small weighing scales sit next to sachets of tea samples to be shortlisted for purchase from auctions. Parag, as the head of sales, marketing and international business, knows well that quality means everything in the “high volumes, low profits” tea business.

His father Rasesh, 72, managing director of GTPPL, is as vigilant. “My grandfather and uncles were passionate about quality, customer satisfaction and the brand value,” he says. And that’s why he, like every director of the company, tastes around 400 to 500 samples of tea every day, customising the blend according to the milk and water of the region to which it would be supplied.

For a company that has humble beginnings, passes on profits to consumers, and expands in one or two states at a time, it is perhaps this obsession with quality that has made Wagh Bakri India’s third-largest packaged tea company, with an annual sales turnover of ₹1,100 crore in 2016-17, and 42 million kg in volumes.

The packaged tea market in India is worth ₹10,000-crore. Of this, according to a 2017 report by market researcher Euromonitor, the market shares of Tata Global Beverages (TGB) and Hindustan Unilever Ltd (HUL) remained stagnant at 29 percent and 27 percent respectively, between 2012 and 2016, while Wagh Bakri increased its share from 7.18 percent to 8.09 percent.

It has had a compound annual growth rate (CAGR) of 10 to 12 percent in volume over the last decade. In the premium segment, Wagh Bakri’s Good Morning competes with HUL’s Yellow Label and Taj Mahal, while Wagh Bakri’s Mili is positioned against HUL’s Red Label in the popular segment. 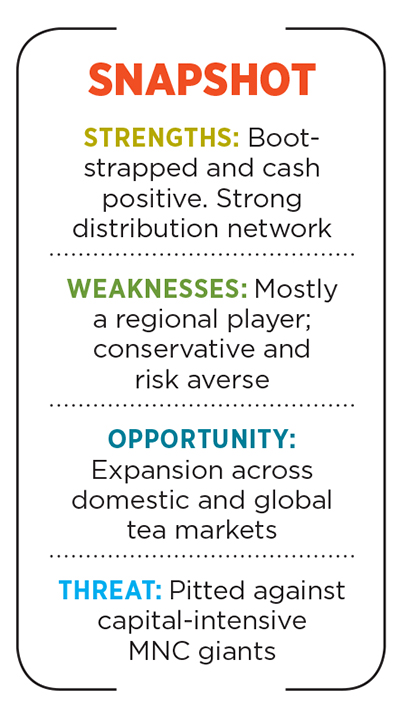 Parag, 43, says sales grew from around ₹520 crore in 2011-12 to about ₹950 crore in 2015-16. Their profits, however, have always seen single-digit growth. Yet, Wagh Bakri has never been in the red, the Desais claim with pride, despite spending close to 10 percent of their revenue on advertising and sales marketing.

The company’s pricing policy also restricts their profit growth, a deliberate decision by the family to prioritise “customer satisfaction”. “We do not increase our prices based on market trends, irrespective of where the prices are headed, unless of course, we have suffered losses,” says Rasesh. “In fact, we are unpopular in the tea fraternity because of this. Very often, we have reduced our price when we have achieved our annual profit target,” adds Parag.

“Serving tea to consumers is a kind of passion for us. It is not a number-crunching game,” says Paras Desai, 43, executive director, who oversees tea evaluation, purchase, finance, operations, IT and HR functions. And the company is willing to be patient, especially in a country where buying tea is a “family decision” and converting consumers is a challenge amid strong regional and national players.

Wagh Bakri is present only in 13 states, largely in central and western parts of the country, as well as a couple of northern and southern states. “We look at a state as a country. We spent a good 10 years in Rajasthan and Madhya Pradesh, before even thinking of getting into Maharashtra. We spent five years in Maharashtra before launching in Delhi,” says Parag.

The reason for this approach is the company’s priority to developing a robust distribution network. “Every year, at our board meeting, we see how many retail outlets and distributors we are going to add,” says Paras. The idea is to “increase the number of sellers. And that is the way we grow our sales”, adds Rasesh, citing the example of Gujarat where the company has a market share of more than 60 percent.

Experts say the company’s approach is not misplaced. Santosh Desai, CEO, Future Brands, believes the company owes its mindset partly to its origins and partly to the nature of tea as a highly local product. Wagh Bakri sees itself “as a brand that understands regions, and operates regionally and therefore the ‘national’ becomes a sum-total of regions, rather than being essentially seen as a national brand”, he says.

Santosh Desai admits that this approach might restrict the company’s ability to harness economies of scale, but adds that the fact that Wagh Bakri is being spoken about in the same breath as the other two FMCG giants is a noteworthy achievement. “Strictly speaking, these brands have different scales. They [HUL and TGB] have been around for a really long time, in a national sense,” he says.

MB Athreya, a consultant to GTPPL, says Wagh Bakri is “unique in its philosophy”, targeting “decent profits, but not profit maximisation at any cost to company image and standing”.

The genesis of such rectitude lies in the company’s origins, dating back to 1892, when founder Narandas Desai moved to Durban in South Africa. He took 500 acres of tea estate on lease to manage and run, before apartheid forced him to follow fellow Gujarati, Mohandas Karamchand Gandhi,
back to India in 1915. Gandhi’s acquaintance and influence shaped Desai’s personal and business ethics; one of his sons was part of India’s freedom movement.

After working briefly at a tea estate in Mahabaleshwar, Maharashtra, Desai applied his knowledge of the trade to start the Gujarat Tea Depot Co shop in Ahmedabad to sell processed tea in 1915. In 1934, the Wagh Bakri brand was born. True to Gandhian values of equality and benevolence, the company’s name and logo depict a tiger (wagh) and a goat (bakri) bridging their differences and sipping tea from the same cup.

While Narandas’s sons (Ochhavlal, Ramdas and Kanti) grew their business to seven shops across Ahmedabad, the third generation—Piyush (chairman), Pankaj (vice chairman and managing director) and Rasesh—moved into the packaged tea business in 1980, transforming the partnership firm into GTPPL.

GTPPL has always been clear about staying light on working capital. That’s also the reason they never owned tea estates, like some other brands such as Goodricke. “Even if it is a 4-lakh kg or a 20-lakh kg estate, you are bound by its production, or the vagaries of nature. Running a tea estate is like running a township. You have issues of labour, their accommodation, food, firewood, hospitals, etc. We decided to focus on the packaged part of it, where there’s a lot to do,” Paras says.

This is also why the company has never needed external funding or considered an IPO. “The tea industry is such that for six months you require capital, and for the remaining six months you don’t, because the tea gardens are closed for four months. So we’ve always been debt-free and cash-rich. Most of our term loans come from banks, who’ve been with us for decades, and understand our working capital requirements. So we have never required the money. And we never had any plan to grow exponentially,” says Parag.

He and his cousin Paras are focussed on product innovation, and growing their brand awareness, ecommerce and international business. Besides there’s a lot at stake with cafes such as Chai Point and Chaayos, and suppliers such as TGB, HUL, Girnar and others contesting for an increasing share of the ₹64,236 crore tea-as-a-beverage market. According to Forbes, tea occupies more than 79 percent of the non-alcoholic beverage market that is estimated to be worth ₹1.95 lakh crore. This market is growing by 20 to 23 percent, and by 2020 is projected to be three times its size compared to 2017.

The international business contributes about 5 percent to the company’s revenues at a CAGR of 18 to 20 percent, with a presence in over 30 countries. While the brand has been popular among the Indian diaspora for more than 25 years, Wagh Bakri is now looking to compete with local players in foreign countries by spending on local managers, media relations, developing suitable blends and ensuring availability across supermarkets, such as Woolworths, Carrefour or Lulu.

Paras attributes their nimbleness in arriving at swift strategic responses to closely-forged family bonds, based on mutual respect. “We are a hands-on organisation. Till now, we lived together. So any challenge can be discussed and resolved overnight. We have been more conservative and cautious, taken more time than required and have taken consensus-based decisions,” Parag says.

The family does not have a constitution to resolve issues or deal with succession planning. “Ten to 20 years down the line, if we decide to do things inorganically, we will have to have a system in place. So we cannot deny that we may need it. But business has to reach that scale and our interest has to reach that scale,” says Parag.