Quotas to improve gender balance on corporate boards (and threats to introduce them) have gone some way to pushing Europe in terms of female representation in directorships.  But the fact remains: globally women are astonishingly scarce in the higher spheres of corporate management.

In the U.S., gender-based discrimination is illegal, yet the June 2014 issue of Fortune magazine reported that the proportion of women CEOs had reached the historical level of 4.8 percent. This was described as “impressive progress”, as in 1998 only one Fortune 500 company was led by a woman. A more accurate statement is that when one starts at (or near) zero any positive change is (almost) infinite progress. 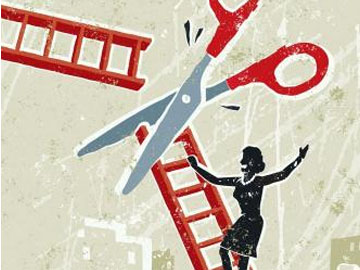 Image: Courtesy INSEAD
Even in the gender and socially progressive Scandinavian countries female presence in executive management remains pathological: a recent survey reveals that only 3 percent of the 145 largest Scandinavian market capitalisations have a female leader. The same is true in France. It seems all around the world the question is being asked, why do women meet so many hurdles on the way to the top?

The motivation for this article lies in surprising, even shocking, research findings released recently highlighting reasons that contribute to this sad state of affairs: the multiplicity of conscious and unconscious biases against women (by both genders); the career expectations patterned for men; and the lack of sponsorship available for women. These barriers form a vicious cycle that is most effective in keeping women from the top.

Complex and pervasive biases against women in the workplace
Claudia Goldin, Harvard Professor of Economics, last year published a rigorous study showing that in most occupations, for the same function, women are paid on average 25 percent less than men. One startling part of this research is the constancy of the pay gap over the last decade.  Another is the obliteration of the regularly voiced claim that it is due to women clinching lower-paying jobs: according to Goldin this explains only 15 percent of the gap. Worse, the gap tends to be bigger near the top: 35 percent in finance compared to 11 among nurses.

Another 2014 scientific study, by Desai, Chugh, and Brief, confirms the perverse contributions by men who control the opportunities for progress in most organisations. The findings (from a sample tested across age and Anglo-Saxon geographies) indicate that men whose wives are unemployed are more likely to make decisions that prevent the advancement of qualified women.

Of equal concern are the experiments by Reuben, Sapienza and Zingales who asked “employers” to recruit potential employees for arithmetic tasks. They observed that lower-skilled men were regularly chosen over more experienced and competent women. The explanation lies in the “women are no good at maths” association bias (held by a majority of men and women) that mentally overrides objective data. Such associations are both conscious and unconscious and help us to understand why no woman so far has ever been in charge of CERN, the Geneva-based international physics laboratory, and why less than 7 percent of senior researcher positions there, and only 17 percent of all academic employees, are women.

CERN does not, of course, explicitly discriminate against women. It is platform for the widely shared and often unconscious “label” (ideology, axiom …) that women are inferior at maths. Even when women present excellent maths credentials (and CERN candidates are not random individuals in the population, they present serious credentials, so the label should not apply), women have to counter implicit negative judgments against them - while men benefit from opposite implicit judgments in their favour.

The biases women face at work are of a similar and pervasive nature as biases faced, for example, by Muslims because of repeated associations between fundamentalist terrorism and Islam. Similarly the profound and unconscious association made by US police officers between blacks and life-threatening danger that substantially differs from that made when the same forces face non-black citizens.

Patterned for men - An alternative career path leads to nowhere
It would be bad enough if the problem of unfair treatment of women was due solely to a number of mental biases. But there is also the important question of diverging career paths.

Male career paths are well known for their linearity: men traditionally take three to five years of job experience before getting an MBA around the age of 30, are offered a major leadership position at 35, acquire international experience before being made Senior VP at 40/45 and move into the C-suite around the age of 45/50. Each step is up, and this path becomes “the” pattern for all.

Two U.S. researchers, Luce and Hewlett, studied the career trajectories of a large number of women and noted that female executives were more likely to follow paths filled with “horizontal” career interruptions.  Reasons vary and include motherhood, a husband’s career, family commitments to children or aging parents, or personal preferences. Women consider such temporary exits from their career a natural thing.  However, reintegrating back into the organisation and finding a job that suits their talents often proves impossible.

Two U.S. researchers, Luce and Hewlett, studied the career trajectories of a large number of women and noted that female executives were more likely to follow paths filled with “horizontal” career interruptions.  Reasons vary and include motherhood, a husband’s career, family commitments to children or aging parents, or personal preferences. Women consider such temporary exits from their career a natural thing.  However, reintegrating back into the organisation and finding a job that suits their talents often proves impossible.

The big hurdle in this case has nothing to do with skills and pertains to women’s deviation from the “standard” career path designed by and for men.  Perverse labelling (conscious or subconscious) sets in as well: women find themselves characterised as unable to be counted on, lacking professional commitment, or presenting insufficient experience given their age.  The solution lies in changing false perceptions and establishing a number of “ladders” that allow women back on the path.

“If he’s sponsoring her, he must like her a lot…”
A third major hurdle to the top is the matter of sponsorship. Sponsoring is key to earning the assignments that allow an individual to show that he or she is “CEO” material.

Recent research by INSEAD Professor Herminia Ibarra carried out jointly with Nancy M. Carter and Christine Silva, Vice-President and Research Director of Catalyst, an organisation devoted to promoting opportunities for women in business, confirmed that although women enjoy the same career mentoring and coaching as men, critical differences appear in terms of what they identify as “sponsoring” which is significantly inferior to that enjoyed by men. Men tend to sponsor largely other men, those that do look to sponsor a female subordinate will find the value of the association discounted by the thinking “if he’s sponsoring her, he must like her a lot…”.

While this in itself should be bad enough,  Hekman and Foo confirm that minority leaders (including women) who actively sponsor minority candidates (including women) are themselves labelled as less competent than executives whose attitude toward minorities are less positive … unless the latter are white males.

New Behaviours, New Attitudes, and New Requirements to Support the Change
The conclusion to all this is clear: the barriers (behaviors, labels, biases…) that prohibit the progression of women to the top are deep-rooted, pernicious, and ubiquitous … and much more prevalent than we imagine and recognise.

Ending this unfair discrimination against women requires understanding, creativity, commitment and perseverance, and foremost positive action by both men and women.  As my colleague Jean-François Manzoni points out, “We do not see the world as it is, we see it as we are.”   The implication is that the first change we need to make is to see the world as it really is.

The idea that this discrimination will, or ought to, end “voluntarily” just flatly defies the research we have mentioned.  Things are too ingrained. Patterns must be broken. And that is where regulation – such as a quota for women - has its place.  Hopefully temporarily …